Can the grandfather of collectible card games make a triumphant return to form, especially in the face of heightened competition in recent years from the likes of Hearthstone? 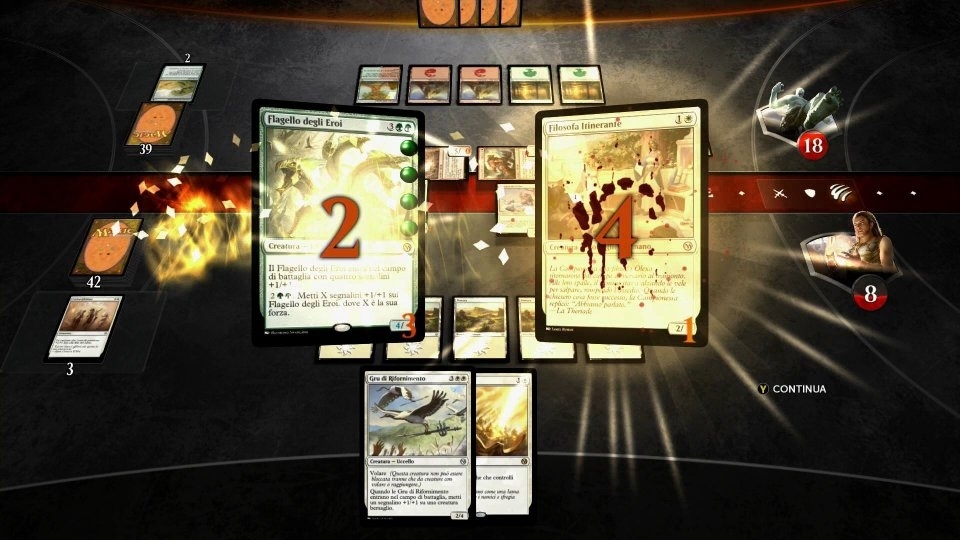 It doesn’t seem all that long ago we were getting excited for Magic 2015: Duels of the Planeswalkers. But a year has already passed and with it comes the latest iteration in this long running collectible card game (CCG), Magic Duels: Origins. True to its nature, Origins doesn’t deviate from the well polished Magic: The Gathering formula. But more than any other version of Magic, Wizards of the Coast has stripped away layer after layer of complexity to welcome new players into the fold. This alone makes Origins the definitive digital version of Magic.

Also read: The Making of Magic: The Gathering - Our Wizards of the Coast Exclusive in Episode 6.

Casting our minds back to last year’s entry, we called Magic 2015 an excellent digital adaptation of the physical version of the game. Yet for all of its established history, Magic was a recent newcomer to the digital space. Accordingly, it lacked some of the simplicity and features boasted by its rivals, notably the massive Hearthstone: Heroes of Warcraft.

Interestingly, the first thing I noticed in Origins is the clear nod to other CCGs. In particular, fans of both Magic and Hearthstone will notice some striking similarities between the two games, especially around the streamlined interface and how cards can be obtained (more on that soon). As the saying goes, imitation is the sincerest form of flattery, and Heathstone's popularity is impossible to ignore. This makes Magic a far more attractive proposition for newcomers to gently ease into the game, whether they be complete newbies to the CCG genre or making the leap from Hearthstone. 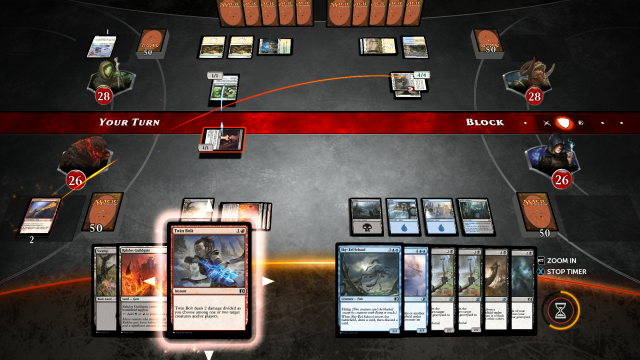 As part of going back to the basics, gone are the annual entries in the series. Going forward, Origins will be the only digital version of Magic to receive regular updates. This is a huge step in the right direction, particularly for bringing (and keeping) new people on board. After all, who wants to download yearly entries in a franchise that is essentially the same game, except all of your progress is reset?

However, as all newcomers will surely attest, one of the biggest barriers to Magic is its encyclopedic amount of complex rules. I was fortunate in that I started playing Magic when I was young, managing to get in on the ground floor when there were comparatively few rules and times were much simpler. Nowadays, for the casual observer wanting to break into the game, the task can be quite daunting.

While I was quite impressed with last year’s gentle learning curve, Wizards of the Coast has improved it even further. A rather lengthy tutorial is built into the storyline. No knowledge of the game is presumed, lobbing in fairly gentle duels and an in-depth explanation of the rules. A number of "Skill Quests" provide further assistance on some of the more complex rules.

Taken together, this introductory phase is very well implemented for both newcomers and those looking to get up to date on the most recent rule changes. Even so, Wizards of the Coast leaves a significant amount of room for player experimentation. The rules may be well explained, but it’s up to the player to figure out their own strategy. And after all, this freedom is what lies at the heart of Magic and makes it such an addictive game. 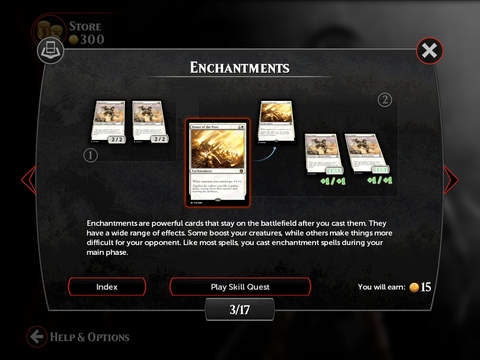 As any good Magic player knows, mastering the rules is only half the battle. Constructing a competitive deck of cards is a delicate craft in itself, requiring patience and iteration. The flexibility given to players to create such a deck in Origins is perfect. For greenhorn players, a step-by-step "Deck Wizard" tool guides you through a simple process to create a solid deck from scratch. For more experienced players, the "Deck Builder" tool gives total control and flexibility to design the deck of your dreams. Even as an experienced Magic player, I tried out the Deck Wizard app and was not disappointed, picking up on several ideas I had never thought of before.

A competitive deck, of course, needs competitive cards. Regular Magic players will know that one of the most satisfying aspects of Magic is that initial moment of obtaining new cards, and nothing has changed! Besting enemies in the story mode or winning duels against human players will net you varying amounts of gold, depending on the difficulty. This gold can be spent in the shop to purchase card booster packs, similar to Hearthstone. One of the most satisfying sounds in life is the ripping open of a foil pack of Magic cards, deliciously anticipating what lies within.

Also read: What if The Simpsons Was Made into A Magic: The Gathering Game?

Also read: This is the Best Way to Get Prepared for Magic: Duels Origins

For those not opposed to undertaking a fair bit of grinding, every Magic card can - in theory - be collected without paying a dime. However, if you’re less patient, players can purchase additional booster packs for real money. It’s a relatively fair system giving players the freedom to adapt their playstyle (and level of patience) to their liking.

So what’s the final word? Quite simply, like a well maintained performance car, Wizards of the Coast has continued to buff its game to a high shine. More than any other version of Magic, Origins welcomes newcomers with open arms. But this is still the game that die hard veterans have come to know and love, offering strategic depth that will please for a long time to come. Truly, Origins is the definitive digital version of magic to own.