The biggest gaming show in Australia will return in 2016. 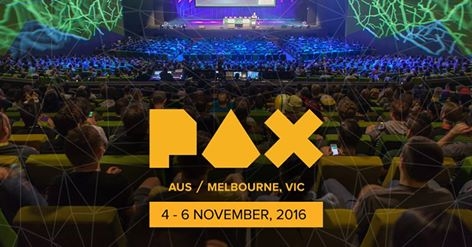 Without much fanfare, we just received a message from our contact at PAX AUS that included the above image and the words, "It's Official..." While not a big surprise, it's nice to know that the weekend starting November 4 is the one to lock away in the calendar. The show is really quite brilliant and talks to all formats, and we love how great a job it does in ensuring there is equal pegging between the big blockbusters and the indies. The crowd is fantastic and the talks engaging. If you're deeply into your gaming, it's an experience we highly recommend.

The official site has yet to be updated, but we expect yet another huge showing of indies as well. We made the indie PAX AUS guide for 2014, which you can grab here on iPad, and it contained 68 indies, with exclusive early access and interviews for every one of them. That's a lot of local developers that get to show off their wares, ensuring the event - having just wrapped its third year - is becoming an important part of the business of video games in Australia, and not just a public celebration. We can't wait.

We’re counting down the sleeps to this year’s huge PAX AUS event in Melbourne, Australia, with a smorgasbord of indie gems from last year.

This time last year, the entire Grab It team was focused - 15-hours a day - on a keyboard. We were conducting interviews, playing games and designing the biggest indie video games magazine ever made. Grab It was lucky enough to work with PAX on the show guide for all things indie, which became Episode 8 of our award winning interactive iPad magazine. In all we showcased everyone of the 68 developers who were on display at PAX AUS 2014.

When we say showcased, we mean full write-ups on the gaming experience, in-depth making of interviews with each of the 68 developers, exclusive art, video content and more. It was an astounding amount of games reading, and we’re extremely proud of the end result - which received a fantastic response from attendees.

If you’re getting amped for PAX AUS 2015, why not get an insight into just how big the indie gaming booth was last year. We guarantee you’ll discover a number of Australian made gems across all formats that you never knew existed, too. Click here to grab Episode 8 for iPad now.