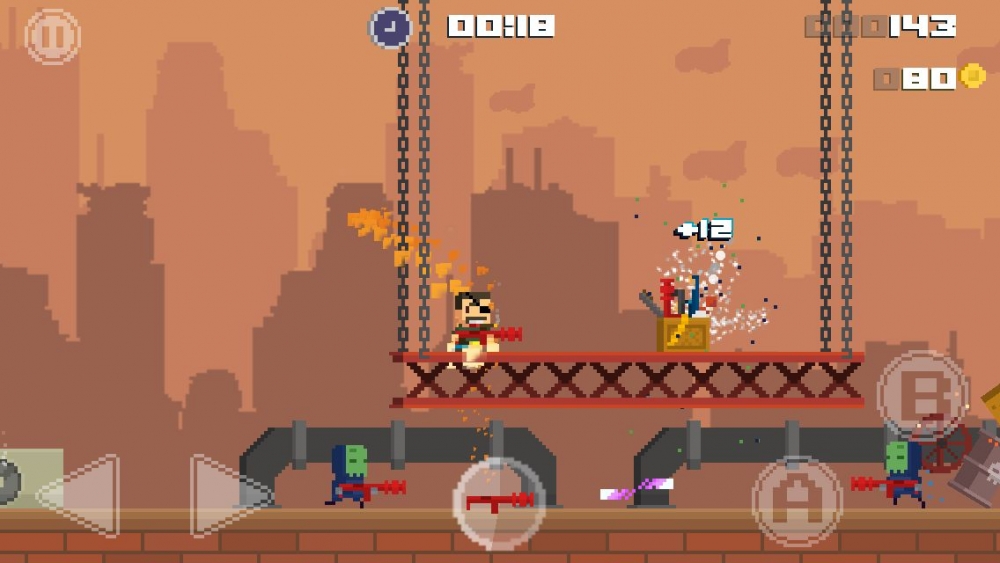 Did you know that at the start of May, there were over 215,000 active games on the App Store? Imagine trying to wade through all of those titles to find something worthy of your time. It's like trying to find a needle in a hay stack, which Mythbusters has proved to be a near-impossible feat unless you have some crazy, hi-tech equipment. The great thing is that we’ve got your back covered here at Grab It. We've perused the App Store and come up with our Top 10 Free iOS Games of May and Top 10 Best Premium iOS Games of May.

If you want to keep your finger on the pulse of all your iOS gaming news, be sure to sign up to our newsletter. You can also check out our Top 10 Free iOS Games of June, April, March, February and January.

10. Godzilla - Smash3 (Rogue Play)
Launching alongside the new Godzilla movie, Godzilla – Smash3 from Rogue Play places the destructive force of the king lizard squarely in players’ hands. The game itself is an interesting mash-up of genres, incorporating match 3 puzzle mechanics, surprising strategic depth and RPG elements. But, most importantly, you are playing as Godzilla so expect to spend a lot of time smashing stuff up.
Grab It Now

9. Gunfinger (Pixel Toys)
If shooting cowboy zombies in the face is your idea of some well-earned down time, then Gunfinger will be right up your alley. From Pixel Toys, Gunfinger is an on-rails shooter that has been designed with simplicity in mind; in fact, all you need to do is tap the screen to shoot. This simplicity combined with over 70 levels and a bunch of weapons to upgrade and unlock, results in a wholly enjoyable experience.
Grab it Now

8. Record Run (Harmonix)
The maestros of music games, Harmonix, retrun with a new rhythm/runner arcade title. With some pumping beats in the background, players duck, dodge and dive through a bunch of obstacles in time of the music. One of the most satisfying aspects of Record Run is that you can import your iTunes library into the game, using your own music as the background beats.
Grab It Now

7. Haunted House (Kung Fu Factory)
If you were alive in 1982, you might recall the creepy Atari 2600 title, Haunted House. Fast-forward three decades and we now have a re-imagined version of the game as a cute platformer. Our protagonist is a young boy who is lost in a big, scary house and must find his way out. Cue lots of running, jumping and platforming. Kung Fu Factory has done an excellent job in creating a competent platformer with some creative twists.
Grab It Now

6. Castlestorm: Free to Siege (Zen Studios)
Originally a PC-only title, Zen Studios has brought its incredibly fun medieval castle defence game to iOS. Castlestorm has a little bit of everything for players to enjoy here, being part tower defence, part brawler and part builder. One moment you might be defending your castle from advancing enemy fortifications and the next moment sending out troops to engage the enemy army. Zen Studios has obviously put a lot of thought and love into its title, ensuring that Castlestorm is not just a simple port of a good PC game, but one that takes full advantage of the iPad's features.
Grab It Now

5. Pixel Garden (Oooweeooo Inc)
Puzzle games are a dime a dozen on the App Store, each trying to outdo the other with more complex and intricate mechanics. Pixel Garden gets it right by keeping things pure and simple. The goal of Pixel Garden is to get as many points as possible by matching flowers that are the same colour and/or shape. Coming from the interestingly named Oooweeooo Inc, Pixel Garden offers up some light strategy elements but still manages to remain quite cathartic. Clear your mind, put your feet up and enjoy tending to your pixel garden.
Grab It Now

4. dEXTRIS (Chaotic Box)
Warm up your thumbs and get ready to lose a good portion of your life to dEXTRIS. In dEXTRIS - no relation to Tetris - players use both thumbs to navigate two blocks around a bunch of inconvinently placed hazards. It sounds simple and, in fact, is simple. But don't let that seduce you into thinking dEXTRIS is simplistic. The longer you last, the more difficult and fast the game will get, requiring some quick reflexes and patience. You might be surprised at the degree of tactical depth needed to do well. When you play dEXTRIS, it might be a good idea to make sure not too many people are around as you'll discover a list of profanities you never knew existed.
Grab It Now

3. Boss Battler (Torpedro Games)
What’s the best part of every action game? The boss battle of course. What if a game revolved entirely around fighting boss after boss endlessly? Boss Battler from Torpedro Games is exactly that. Taking control of a little spaceship, Boss Battler plays out as an endless vertical scrolling shooter. Coming up against 3 unique bosses, players have to survive as long as possible while the boss evolves into more difficult forms. This is quite a challenging title with lots of replayability.
Grab It Now

2. Bardbarian (Treefortress)
Let me be the first to admit I'm sort of cheating on this one. Bardbarian, from indie dev Treefortress, originally released in January as a paid app, but recently made the switch to free-to-play. However, I can't stop talking about it, as Bardbarian is one of those games that simply belongs on every iPad. Best thought of as a hybrid between a tower defence, RPG and strategy title, players take control of Brad the Bardbarian to repel wave after wave of pesky enemy invaders. With charm oozing from every pore, you'll have a lot of fun with this light-hearted, musically driven title. We interview the developer and showcased the game in Episode 4 of Grab It.
Grab It Now

1. Bill Killem (Everplay Interactive)
Is your idea of a fun Saturday afternoon one spent watching over the top cliché 80s action movies while chuckling in appreciation of the cheesy one-liners? If that’s you, then look no further than our number one free iOS game of May, Bill Killem. Clearly taking inspiration from the king himself, Duke Nukem, Bill Killem harkens back to the glory days of the 16-bit retro sidescrolling shooter. Naturally, there’s been an alien invasion in Los Angeles, and it’s up to our testosterone-filled hero to use every ludicrous gun at his disposal to make those nasty aliens go away. Don’t think too hard about this one, just go play it!
Grab It Now