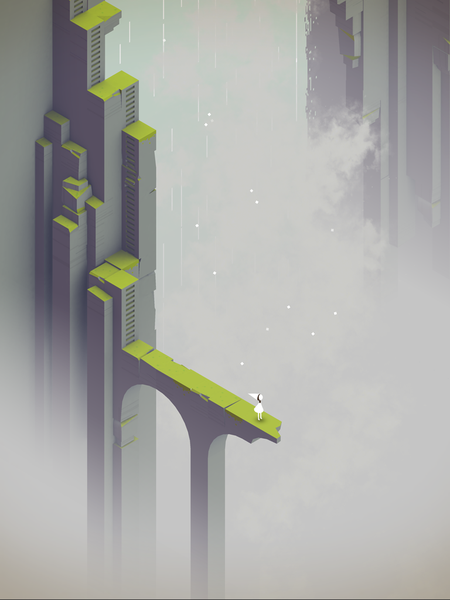 Above you will see the first screenshot for the hotly anticipated expansion to Monument Valley. It suggests and increase in the verticality of the levels, an element that brought the latter levels in the original game to life. The mind-bending puzzle game was a huge hit with iOS gamers, and also with us here at Grab It. Not only did it reach the podium in our Top 50 Best iOS Indie Games of 2014, So Far list, but we featured a world exclusive making of feature in Episode 3 of Grab It, for which it was the cover star.

The expansion is said to be almost as big as the original game, which was 10 stages. So we can expect something in the eight or nine range. Developer ustwo also promises a twist to the formula with each stage, and word has already done the rounds about one level that can be played normally, or upside down, in a neat visual trick. The game will sell as an IAP within the game linked below, and given the pricing of the original, we'd expect it to go in the $3 to $5 range, although that is just speculation. It's due out before the end of the year.

Monument Valley just this past month got its first genuine rival in the like-minded Back To Bed, which also starred in our Top 10 Best Premium iOS Games of August, so eager fans wanting to experience more of this kind "architectural puzzler" gameplay straight away can give that a go. Otherwise, we totally recommend picking up Monument Valley if you have not already and experiencing the wonders of Episode 3 of Grab It (trailer below).

Reference:
- Monument Valley
- Back to Bed
- Grab It Episode 3