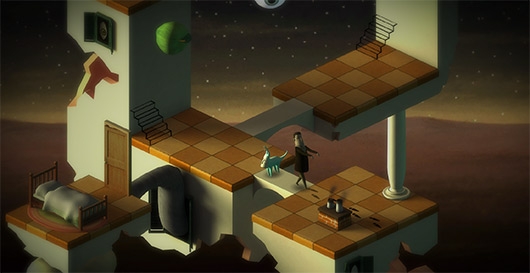 Some moderately famous guy once said, “my momma always said, 'life was like a box of chocolates. You never know what you're gonna get.'" When I peruse the App Store, this quote comes to mind. The quantity of titles released on a weekly, and even daily, basis is truly astounding. You just don’t know what you’re going to come across. Unfortunately, it is too often the case that the real gems are lost beneath a sea of absolute rubbish and clones. Which is what makes our job so important. It is our pleasure to present this month’s top 10 premium gems of the App Store for your consideration. Have a look through our picks and do these devs a solid by grabbing a game or two. You won’t regret it.

And if you somehow manage to get through all of these amazing games, you may also want to check out our Top 50 Best iOS Games Of 2014 So Far - which goes from January to June - or our Top 10 Best Premium iOS Games of July.

10. Bik – A Space Adventure (Zotnip)
It’s always exciting to see new talent pop up on the App Store, and developer Zotnip has come out of nowhere with an incredibly solid debut. Bik is a retro style point-and-click adventure heavily inspired by early LucasArts and Sierra games, such as Maniac Mansion and Space Quest. It is a wonderful love letter, too, capturing the essence and spark of these early adventure games that few others have managed to achieve. The story is also fun, which sees a young boy desperately trying to make his way back to Earth after being kidnapped by aliens. Bik is a rare beast, being equal parts witty and humorous, yet still managing to make you think.
Grab It Now

* Also check out our article on bringing Space Quest back through iOS in Episode 2 of Grab It.

9. Almightree: The Last Dreamer (Chocoarts)
Like a wonderful dream, a few of my favourite games of all time have seemingly come together in this fantastic mash-up of 3D action and puzzle platforming madness. Almightree: The Last Dreamer looks absolutely gorgeous, combining a Bastion aesthetic with Legend of Zelda style gameplay. The world is crumbling around you and it is your job as The Last Dream to halt that destruction by restoring the Almightree saplings. Each level is a thoughtful puzzle that needs to be navigated to find the tree. Parts of the world can be shifted around you, such as moving blocks to create a pathway to a previously inaccessible area. The difficulty ramps up gently, but ever so surely, meaning you’ll always be facing a challenging yet accessible experience in this gorgeous world.
Grab It Now

8. Back to Bed (Bedtime Digital Games)
Sleepwalking sucks at the best of times, but it gets much worse when your dreams consist of walking through buildings with an architectural design inspired by surrealist art? You know, the trippy sort of building design that twists back in on itself and defies the human eye. If you’ve played the brilliant Monument Valley, Back to Bed will feel immediately familiar. But Back to Bed sets itself apart with its own charm and clever puzzle designs. As his guardian, it’s your job to manipulate the environment to prevent Bob from dozily wandering off the side of a building during his sleepwalking adventures. The puzzle design is fun and will leave you scratching your head in confusion more often than not. But then again most great pieces of art leave me pretty confused.
Grab It Now

* Did you know we featured Monument Valley on the cover of Episode 3, in which we featured the world exclusive making of on that great game.

7. The Nightmare Cooperative (Lucky Frame)
There seems to be a bit of a theme going on with the games in our list so far, with the idea of sleep featuring prominently. Well now we turn to the very opposite of a good night’s sleep – the nightmare. Make no mistake, The Nightmare Cooperative is a punishing roguelike that will leave you questioning your sanity. It may seem cute to be attacked by a giant snail, but when that snail annihilates your entire party for the umpteenth time, murderous thoughts may start forming. With every death, however, is a lesson. A lesson in better understanding the strengths of your party and how to use them strategically. In doing so, it makes it all the more satisfying when that slimy snail lays slain at your feet ensuring that while The Nightmare Cooperative is a morbidly fun title, it certainly isn’t one for those who enjoy a good night’s sleep.
Grab It Now

6. ALONE (Laser Dog)
One of the greatest fears we all share as humans is that of being cut off from other people. Being isolated. Being alone. ALONE draws on that fear in its bleak endless space runner. Guiding a little solo ship through the empty recesses of space, your death is inevitable. Even the environments look washed out, devoid of life and colour. If that wasn’t enough, the game will punish you relentlessly for just the one small mistake. The pace is breakneck and the environment is unforgiving. Fortunately, developer Laser Dog has implemented some incredibly tight and intuitive controls that will prolong your death for just that little bit longer. The grisly outcome may be unavoidable, but in a morbid kind of way you’ll keep being sucked in for just one more go.
Grab It Now

5. BioShock (2K)
The behemoth on our list this month is the darling of the gaming world, BioShock. Let’s be honest, not much really needs to be said about this one, except to say BioShock defies being labelled as simple. Rather, it's an experience that will stick with you for a long time to come. It may not be quite as magical as the first time we lost ourselves in the world of Rapture on consoles in 2007 - and the touch-based controls can be a bit fiddly - but what a testament (and privilege) it is that one of the greatest gaming experiences of all time can now be carried around with us. Tablet gaming has come a long, long way.
Grab It Now

* You may also like our article Why Ken Levine Jumped off a Sinking Ship, and the Top 10 FPS iPad games, as detailed in Episode 2 of Grab It.

4. Dragon Quest IV (Square Enix)
Square Enix has certainly been busy on the App Store lately, bringing many of its classic RPGs back to life. The latest to make the transition to our pockets is Dragon Quest IV (hilariously briefly named Dargon Quest upon release). Even 25-years after its initial release, Dragon Quest IV remains one of the most relevant and amazing RPGs of all time. The strong cast of party members, solid combat mechanics and unique storytelling style remain the benchmark against which modern RPGs should be compared. Square Enix has shown a lot of respect to its fans by performing an excellent port of the game, which feels intuitive and natural on touch devices. For old school fans or those who love classic RPGs, Dragon Quest IV is a must have.
Grab It Now

* Check out the Top 10 RPG Crossover games on iPad - many inspired by Dragon Quest - in Episode 7 of Grab It.

3. Joe Dever's Lone Wolf Act 3: The Shianti Halls (Forge Reply)
Continuing the run of hot digital gamebooks to release in the last few months is the third instalment in Joe Dever’s Lone Wolf series. Act 3 continues to build on the story and gameplay seen in Act 2, with Lone Wolf continuing his quest through The Shianti Halls, facing off with some new bad dudes called Vordaks. There’s a lot to like about Forge Reply’s work, not least of all its willingness to experiment with (and tweak) traditional gamebook mechanics. The satisfying combat is worth singling out in particular, mixing real-time reflex fun with turn-based action. We reviewed Acts One and Two of Lone Wolf in Episode 5 of Grab It, calling it “one of the best gamebook adventures on the market which strikes the perfect balance of an old-school gamebook feel while breathing new life into an otherwise aging genre.” You'll also find an interview with the developer on the making of the series.
Grab It Now

2. The Journey Down: Chapter Two (SkyGoblin)
Point-and-click adventure games come in all shapes and sizes, but this one is pretty special. The Journey Down has a soul music-infused, Afro-Caribbean vibe that immediately sets it apart from anything else I’ve played. The hand painted graphics are both startling to the eye and almost disturbing at the same time. It’s also hard not to love the game’s bumbling protagonists, Bwana and Kito, with their laid back and gullible attitude, and slow drawl. Chapter Two continues the lovable pair’s adventures to the mysterious underland while searching for their long last father, Kaonandodo. For an adventure game with a difference, complete with smart puzzles and an engaging story, The Journey Down is definitely worth your time.
Grab It Now

* If you would like to start from the beginning, grab Chapter 1 here.

1. Appointment With F.E.A.R. (Tin Man Games)
Taking out the top gong this month is a rather super game. In fact, it's a superhero game. I make no apologies for my lame humour, which wouldn’t be out of place in the latest digital gamebook from Tin Man Games, Appointment With F.E.A.R. Originally released in 1985 as part of the Fighting Fantasy gamebook series, Appointment With F.E.A.R. is quite different from any of the other titles in the series. As the sworn defender of Titan City, it is our superheroic responsibility to stop the dastardly criminal organisation F.E.A.R. in its tracks. There is much to like about this gamebook – not least of all the wonderfully campy vibe – but it is the accessibility that really sets it apart. Whether a veteran of the genre, or never having picked up a gamebook in your life, there are absolutely no barriers to enjoying this delightfully humorous title.
Grab It Now

* We interview Tin Man Games about the art of making digital gamebooks, and provided our Top 10 Gamebooks on iPad, in Episode 6 of Grab It.