iOS is a fast moving platform, and four weeks worth of releases can add up to a lot of games. Whittling them down to just ten is no easy task, but we've done our best so that you can enjoy the cream of the platform's crop. So join us on another trip down the rabbit hole as we point-and-click, puzzle-platform, slalom, shoot, strategise, loot, explore, choose our own adventure and mashup the lot.

Yep, life is good - hammer those links to download and play.

10. Dudeski (Static Oceans Corp)
This is pure arcade fun for those wanting a cool quick fix. Chase high scores on very old-school skis, and collect pine cones to trade for gear as Shred Lord Mountain becomes yours to own with no IAPs. It’s not the prettiest game released in March, but there’s charm here that’ll creep up on you, and that satisfying sense of ownership from never having to worry about whether you’re missing out on something by not buying a bag of in-game currency with real-world dollars.
Grab It Now

9. Braveland (Tortuga Team)
This strategy adventure is not reinventing the wheel - we’ve seen turn-based battling played out on hexagonal grids many times before. But Braveland’s level of polish helps to elevate it beyond obscurity. From humble beginnings as a warrior’s son, to commanding your own army, the story is played out in bright and inviting artwork, with a clean and uncluttered user-interface.
Grab It Now

8. Mount Olympus (iCool Geeks, Tyler Parsons)
Point-and-click adventures have really come into their own on touchscreens - getting hands-on without the mouse middle man can be an engaging experience if done well. Mount Olympus’ elegant hand-drawn art is brought to nearly three hundred scenes and a huge variety of puzzles, making for a great addition to the genre. The Gods have gone missing - get lost on a quest to find them.
Grab It Now

7. Tiny Space Adventure (Alexandre Minard)
Falling somewhere in between a point-and-click adventure game and a puzzle platformer, Tiny Space Adventure bridges the gap with aplomb. Vibrant and endearing graphics with remarkable character art make for a memorable experience. The visuals feed your inner child, whilst the puzzles nourish your grey matter pleasingly.
Grab It Now

6. Star Horizon (Tabasco Interactive)
This mostly on-rails space shooter is one to fire up when you’re out to impress your friends - it really shows off the power of your iPad or iPhone. The cinematic space battles are executed in triple-A graphical showpieces that’ll make you wish for a longer campaign once it’s over. Hopefully, if Star Horizon finds enough success, a sequel might flesh out what is already a thrilling ride.
Grab It Now

5. Devious Dungeon (Ravenous Games)
Taking its signature 16-bit 2D art style into dungeon crawling RPG territory, Ravenous Games continues its quality run of iOS games. Loot, boss battles, character progression and five worlds to explore are all tied together with the competency in control mechanisms we’ve come to expect from this developer. Randomly generated levels help add value to what is a solid addition to your RPG folder.
Grab It Now

4. 999: The Novel (Chunsoft)
Nine Hours, Nine Persons, Nine Doors (if going by its original name) is a Nintendo DS alumni that removes the puzzle element of its original form for its move to iOS. However, it still retains its atmospheric and fantastic choose your own adventure story and that - for our money - is its best asset. The mysterious Zero has kidnapped your character and eight other unlucky souls and left you on a giant ship. You're then forced into a deadly game to win your freedom.
Grab It Now 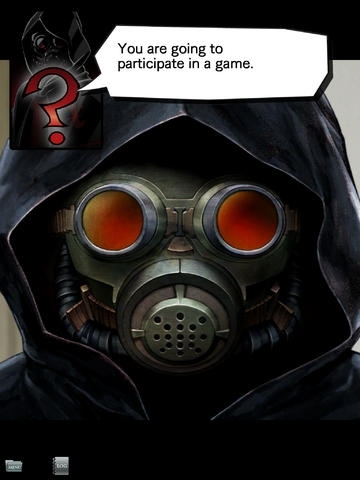 3. Sometimes You Die (Philipp Stollenmayer)
Simple colour palettes are a great way of removing distraction and help to put the focus on a game’s interesting concept. A simple colour palette and an interesting concept are both present and accounted for in Sometimes You Die. The gameplay revolves around sacrificing avatars so others can live, whilst the stark visuals are complemented by a post-modern self-referential atmosphere. This puzzle platformer deserves our attention.
Grab It Now

2. Glorkian Warrior: Trials of Glork (James Kochalka, Pixeljam)
Mashing up a classic Commander Keen style platformer with a Galaga inspired shooter sounds like an awkward mix on paper, but after watching the trailer for Glorkian Warrior: Trials of Glork, you'll probably be wondering why you haven't played a game like this before. With hand-drawn comic book visuals from artist James Kochalka, and game development from Pixeljam, this has cult classic written all over it.
Grab It Now

1. Mines of Mars (WickeyWare)
On the surface, Mines of Mars may be a game played in only two dimensions, whilst the “mining” is simply depicted by breaking huge square blocks in a perfectly proportioned grid. But the story interwoven throughout, the expertly crafted atmosphere, and the genuine surprises you'll discover beneath the red planet's surface all come together to pull you in, encouraging you to role-play beyond the simple facade of a 2D action platformer. WickeyWare recently announced an upcoming update set to add multiplayer and a bunch of new helmets to collect as well, so there is even more to look forward to. Mines of Mars is one of our highlights of 2014 so far, and takes the top spot for March.
Grab It Now