The App Store is a bit like FIFA. It's filled with a lot of funny faces from all over the world - some bad, some good - but admired for the few that really stand out from the crowd. The superstars. A month may seem like a short time, but in the busy iPad league its akin to a season, and we thought we'd highlight this month's MVPs. The most valuable plays of February. Get any or all of these; you can't go wrong. Once you've done that, you can move onto our top 10 free iOS apps of February.

And remember to check out Issue 1 of Grab It Indie Games Magazine - it's built like a game, filled with interactivity and choice as you discover 22 in-depth reviews, 5 exclusive features, 14  interviews and plenty more.

(click here for the  top 10 best iOS games of January)

1. Out There (Mi Clos Studio)
Space is scary. I certainly won't be going there anytime soon. However, I'll happily explore the deep recesses of space from the comfort of my lounge in Out There. Equal parts gamebook adventure and resource management sim, Out There is a difficult, but rewarding experience. The threat of permadeath lingers in the background like some alien virus, pushing you to question every decision you make.
Grab It Now

2. Threes! (Sirvo LLC)
It's not immediately obvious why Threes! is such a hit. All that's involved is moving a bunch of numbers around to create larger numbers. This may bring back repressed memories of scary math classes at school, but let us assure you that Threes! is an incredibly charming experience, leaving you with nothing but warm, fuzzy feelings. For a game that's all about numbers, that's a pretty amazing feat.
Grab It Now

3. Avoid Sensory Overload (NuOxygen)
Forget Flappy Bird, fans of high scores should definitely check out Avoid Sensory Overload. It’s seriously addictive and, on the extreme difficulty, seriously challenging. Somewhat similar to endless runners like Boson X or Temple Run, you’re endlessly flying forwards through a 3D world in a little spacecraft, all to the tune of some toe-tapping electronic beats. A textbook “easy to pick up, hard to master” score chaser.
Grab It Now

4. Zombocalypse Now (Tin Man Games)
Australian developer Tin Man Games has made a name for itself bringing the old school "choose your own adventure" genre to a modern audience. Zombocalpyse Now is a departure from their usual material, following the exploits of a stuffed bunny in the zombie apocalypse. Yes, you read that correctly. Zombocalpyse Now is wonderfully self aware and extremely well written, and had me roaring in laughter down every twisted adventure path.
Grab It Now 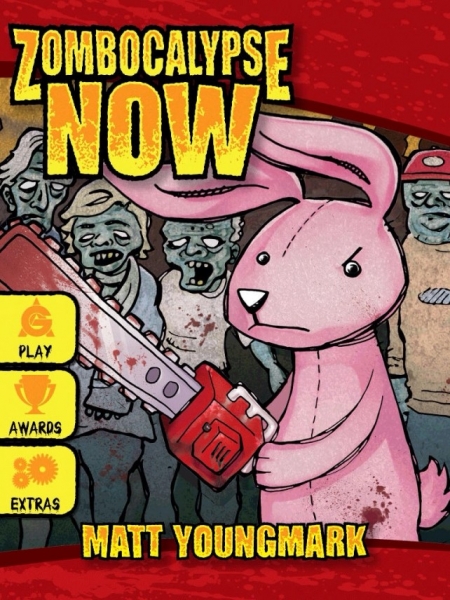 5. Second Chance Heroes (Rocket City Studios)
If history is not your strong point, you may want to check out Second Chance Heroes. This insanely fun cooperative action-arcade game transports a bunch of famous historical heroes to the future to prevent the inevitable apocalypse. If fighting off zombies with a chainsaw wielding Abraham Lincoln sounds appealing, this is the game for you.
Grab It Now

6. Toast Time (Force of Habit)
Toast Time is a stupidly fun arcade game with more breakfast puns than you could poke a baguette at. As soon as you load up Toast Time you’ll have a smile on your face that's not usually associated with breakfast time. Toast Time is an intriguing game that's difficult to categorise. It's part shooter, tower defence, and physics puzzler all wrapped up in buttery goodness. You can read our full review here.
Grab It Now

7. Oquonie (David Mondou-Labbe)
After seeing Oquonie in action, you'll have yet another game to arm yourself with during your next "are games art?" debate. Made by David Mondou-Labbe, you take control of some very strange looking creatures in order to traverse a maze-like structure that will melt your mind with its stunning visuals and characters. It's more-or-less a game about adventuring through art, which was created by the incredibly talented and acclaimed artist Rekka Bellum.
Grab It Now

8. R-Type II (DotEmu)
Gamers who spent plenty of time in arcades in the 1980's will have fond memories of the classic sidescrolling series R-Type. After bringing the original R-Type to iOS last year, developer DotEmu has done us all a favour by reintroducing the fantastic R-Type II to our new, touchscreen enhanced lives. Are your reflexes up to the task of taking on the Bydo Empire a second time?
Grab It Now

9. Tengami (Nyamyam)
Developer Nyamyam has released an incredibly beautiful and surreal adventure in Tengami. When you find a game that is described as a "point & touch adventure game inside a Japanese pop-up book," you know you're in for something a little bit special. Don't go in expecting the wrong thing from the general gameplay, as it's the sheer sense of wonder that is worth your time.
Grab It Now

10. God of Light (Playmous)
God of Light is an interesting experiment. The game itself is a mind-bending, light-reflecting puzzler that looks visually stunning. But adding to its immersive qualities is legendary beatsmith James Lavelle and his trip-hop crossover band UNKLE, who provide the soundtrack. This makes for a fascinating game that draws you in with simple thought-provoking gameplay, but keeps you hooked with soothing and catchy beats.
Grab It Now

If you are still looking for more gaming, check out our article App Store Sale Frenzy - cause 12 genuine gems from 2013 just went on a huge sale.