Is Legends of the Skyfish by Mgaia Studios the killer Apple TV app we were hoping for? 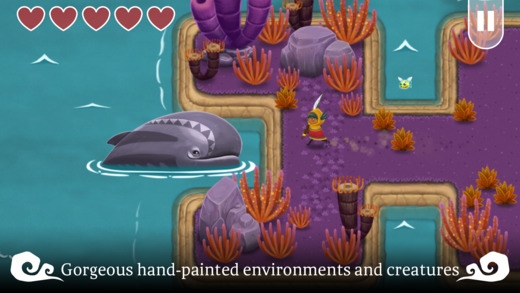 The fishermen of the aptly named Fishermen's Town became greedy, attracting the ire of the Skyfish, risen from the deep to take its vengeance. After a beautifully rendered storybook sequence sets the scene, you're on your way to save your fellow townsfolk from obliteration.

But is this latest offering from prolific mobile publisher Crescent Moon Games and developer Mgaia Studios worth your time?

Legend of The Skyfish's visuals definitely weigh in on the positive side of the argument. Presented in a flat, 2D paper on paper aesthetic, with a muted colour palette that harks back to the Golden Storybooks of my childhood, it's a very pretty game.

The 45 levels however are grouped into three sets of 15, with the visuals only changing for each of those three sets. The variation in the depiction of those three sets amounts to a different colour palette, and differently shaped level furnishings of trees and bushes. Once you've played the first few levels of each set of 15, you do spend a long time waiting for more variety.

This description of the visuals can also be applied to most aspects of Legend of The Skyfish.

What it does, it does well, but after the novelty of something newly presented wears off, players will be stuck with slight variations of that same thing for many levels until handed more novelty.

There are some nicely designed monsters, but sadly not many varieties, with a couple of them repeated in different colours and taking three hits to kill in later levels instead of the initial two hits.

The same can be said for the puzzles. Your grapple-hook, which in this case is in the form of a fishing rod, is used to hook onto points to traverse platforming puzzles, while two-coloured switches opening some gates and closing others make for some interesting maze configurations. There are also block pushing puzzles, stepping stone spikes, and fireball spouting totems. All are combined in some nicely imagined ways, but with only these handful of options employed over the 45 levels, you often end up feeling like you are playing through a slightly altered facsimile of a previous level.

A strength of Legend of The Skyfish is its boss fights, of which there are three, one at the end of each set of 15 levels. Harking back to the boss fights of yesteryear, each involve learning a pattern and some sharply timed action, leading to a satisfying payoff once defeated.

Available on both Apple TV and iOS, Legend of The Skyfish sits in a strange middle ground - is it stronger as a mobile title or a console title? There are arguments for both.

I've played through this title in its entirety on Apple TV with a controller, and it absolutely benefits from the sharper, tighter controls. On mobile however, play sessions tend to be much shorter, and I feel that many of my misgivings about the lack of variety come from playing a lot at a time. But on mobile of course you'll be sacrificing the accuracy of the controller that much of Skyfish demands, and it just isn't the same playing with a controller synced to a small mobile screen.

Ultimately, Legend of The Skyfish plays well, sounds and looks great, but lacks in variety and depth. I actually would love to see the basic gameplay ideas and visual style translated into a bigger, deeper game. You will collect better fishing rods, boots and hoods a small handful of times on your journey, but I can't help but think with a more fleshed out story, and deeper RPG mechanics, Legend of The Skyfish could be the Zelda-inspired adventure its trailer wants it to be.

Apple TV sorely needs some adventures with the kind of tight platforming and beauty that Legend of The Skyfish brings to the table, but just with a bit more scope and depth.

Legend of The Skyfish 2 perhaps?