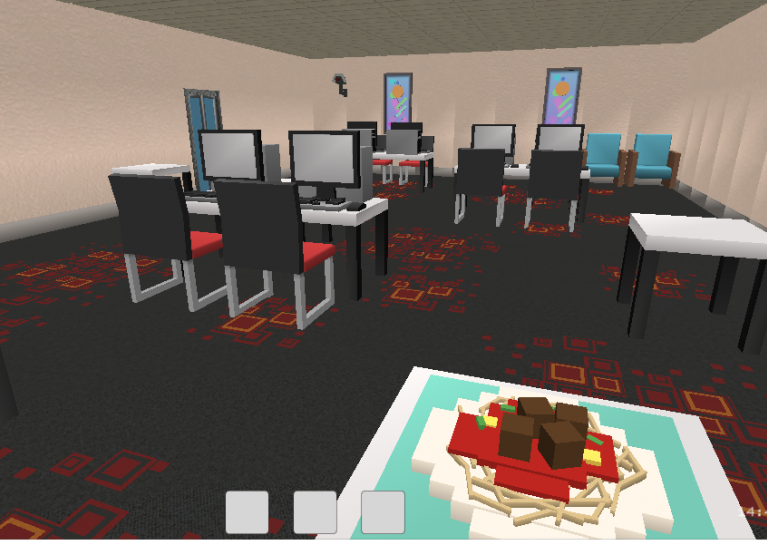 If you haven't already, be sure to check out Part 1, and Part 2.

The room is very different at the end. The clutter of computers, coffee cups and chip packets have all been cleared away, the sleeping people in corners have rolled home and into the safety of their own beds. In the corners of each room are the lonely computers and sleepy project managers lazily sipping coffee and showing the fruits of their labours.

The third and final day of Global Game Jam 2015 has come to an end, and this is the final scene.

I spoke to a couple of veterans, those designers for whom this is an annual ritual. What I heard time and again was that day three separates the professionals from the amateurs. That for their first or even second Game Jam, everyone tried to stay awake and productive for the full 72 hours. Those still coherent on the third day were those who planned their work times, spent time in the quiet of the sleeping quarters and worked as a team.

This third day I had a chance to check out some of the most polished games - I saw some that felt days away from the App Store and some that needed more time. But through all of them I saw the immense time and effort that went into bringing these ideas to life.

One such title was Utensil Quest. A multiplayer networked game about finding dinner at a Game Jam, with the mentality of a spy novel. One player sits in a strategic view watching the cameras in and around the event, while the other sneaks through the halls looking for lost utensils. The idea is that you have forgotten your ID, and the guards will toss you out if you are found. One player looks around the environment through the cameras, keeping an eye on the guards and taking note of the positions of the food and utensils. The second player, armed only with a hand drawn map and no indicator of their own location, needs to listen very carefully to the "handler," working out which way to go and how to get there safely.

The visuals are simple, trimmed down to focus on the gameplay. One of the designers - Ed - told me; “the amazing thing was that all the little things we tried didn't work, and the hardest thing that we needed to sort out was working within the first few hours.” This was in reference to the difficulty of setting up networking for the game, and getting the two sides of the game to communicate properly. What struck me was the awesome blend of cooperative and solo play - it isn't easy to let someone else guide you when you are essentially blind.

I did see a couple of games that felt moments away from the App Store. Space Punch, a game clearly designed with touchscreens in mind, is like soccer with astronauts in space. The idea is to take turns as either the red team or blue team, then fire your space men at the opposing team, trying to bounce them into dangerous obstacles or out the air lock. It is frantic, slightly manic, and a great crack at single screen multiplayer. The controls are reminiscent of Angry Birds as you click and drag each spaceman to build momentum before flinging them across open space. With any contact, space men lash out at one another with fists and feet, a satisfying thwack echoes through the space station as they belt one another. At the time of playing, the experience unfolded on just the one screen, complete with two air locks as goals and a couple of evil looking flame jets to avoid. But the intention is to expand to either side, so that the game operates much more like a tug of war.

Finally, each team was offered a chance to talk about their process in front of the rest of the attendees in the auditorium. It was a flurry of excitement and laughter as we heard ridiculous concept after zany idea. But the sense of camaraderie and achievement was everywhere.

During my time at the Global Game Jam and since uploading my articles, I have been asked a few times by different participants how I chose which games to talk about and focus on. The fact of the matter is that I tried to talk to as many teams as I could while I was there, and wrote about the ones that I enjoyed playing the most. Of course there were almost fifty other games that I didn't have time or words to cover, so by all means I do recommend looking them all up. If you have a favourite, or if you were jamming at another site, leave some notes in the comments below for others to read about!

Well done to everyone who jammed this year, and I hope to see you all again in 2016.