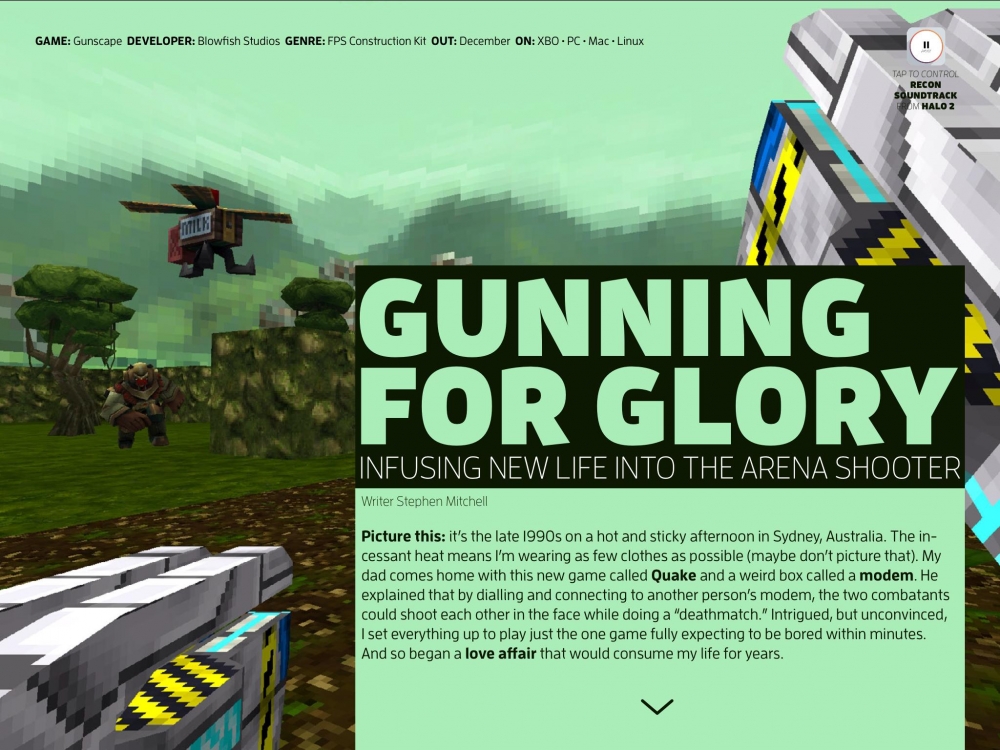 Note: For the full list of 68 indie games interviewed and analysed in Episode 8 of Grab It, click for more info on the App Store or watch the trailer.

One of my most anticipated games of the year has to be the indie gem, Gunscape.

One of the big draw cards of the upcoming PAX AUS in Melbourne, Australia, is the Indie Showcase. Chosen by a panel of grizzled industry veterans, the Showcase highlights a select few titles as the most outstanding from the Australian and New Zealand indie scene. One of those games that made the cut – and which will be playable at PAX AUS – is Gunscape by Blowfish Studios.

A rather succinct (albeit crude) way to describe Gunscape would be a love letter to the entire FPS genre. At its core Gunscape plays out like a classic arena-style shoot-em-up – such as Quake III Arena – including typical game modes such as Team Deathmatch, Free-For-All and CTF (Capture The Fish.) But Gunscape is so much more, with Blowfish Studios preferring to label its game a “FPS Construction Kit.” Indeed, Blowfish Studios is putting a massive focus on the community with creating, editing and sharing player developed maps integral to the experience. Friends can even jump in and help out the build via co-op, a la Minecraft.

Intrigued? Well, let us whet your appetite some more. Ahead of PAX AUS, we had the opportunity to catch up with co-founder of Blowfish Studios, Ben Lee, to chat about the origins of Gunscape. We've run a massive feature in Episode 8 of Grab It, featuring a tonne of assets, music, information and more about the making of this game. Here is a snippet of what Lee told us in reference to his inspirations:

“We’ve managed to bring in some core experiences from all these [classic FPS] games into Gunscape. We have the simple, yet fun, core FPS gameplay from Quake. This is essential as no matter what kind of map a player creates, the experience of playing it as an FPS remains fun and competitive. Unreal Tournament 2K3 really started expanding on the different types of multiplayer gameplay in the FPS genre and this is something we’re also bringing in to Gunscape. There are at least eight different multiplayer game modes and we’ll continue to add more with each additional in-game theme. In fact, the big news we’re announcing at PAX AUS is a theme inspired by Bungie’s Marathon games.

Finally, GoldenEye had some memorable game modes too, but the obvious aspect we are capturing here is the splitscreen console gameplay – not that it's limited to gaming consoles only. With the advent of Steam Machines a whole new player base will be happy to play some local multiplayer. Gaming PCs should also be well equipped to handle up to nine player split screen in Gunscape on a nice 4K display!”

This is just scratching the surface of what we can expect from Gunscape. For the rest of our massive in-depth making of feature and world exclusive interview with Lee on Gunscape, be sure to pick up the PAX AUS Indie Game Guide. For a limited time only, the app is absolutely free. So go on, grab it here!