Update: We've just got word that the long-awaited expansion of Flat Earth Games' TownCraft to the iPhone (and Mac, for that matter) is happening this Thursday, April 24. Definitely worth grabbing if you haven't enjoyed the iPad version already.

Original Story: Flat Earth Games impressed many with its first foray onto the App Store with TownCraft – you can grab it here. The game recalls the loveable town-building charm of Animal Crossing and meshes it with the creative crafting of Minecraft to create a timesink of epic and enjoyable proportions. While the original experience reviewed solidly, Flat Earth Games has been hard at work building on the core platform with new updates and tweaks. We caught up with co-founder Leigh Harris to find out more on his update philosophy, and to get the skinny on Flat Earth’s next intriguing project:

It has been seven months since TownCraft, your first game, came out – what has been the most consistent bit of feedback you have received from fans?
I guess we've learned a lot about the game's design. Namely, no matter how much time we spend second-guessing our own ideas about what constitutes a “logical” match when crafting items, the system we used was bound to cause frustration. Simply put, not everyone thinks like we do. So our crafting system works, but you were spot-on [in your review] when you defined it as sometimes being trial-and-error. When you nail something, it's satisfying, but frustrating when you don't. That's something we'd improve on for future games.

The other bit of consistent feedback (thankfully) has simply been that people really seem to love the game and are stoked we've been updating it so much since launch.

In casual conversation, you’ve described the game as being “a pretty different beast” to when it first came out, what has changed?
Well, when the game first came out there was the three story levels which were essentially easy, medium and hard modes, and all of them were set in a medieval forest. Now, there's the medieval forest maps, a swamp, a desert island, a river and a Halloween map in there, and I'm working on a desert map at the moment with stuff like gold panning in there.

There were very few options, no way to save the game and a whole host of other things. Now there are up to five save game slots (families requested those), the ability to mute the music so you can play your own, a zoom-to-town function, a placeable sand quarry and we've redone the entire UI so it all looks and feel much more thematically appropriate.

It's funny the little things you don't think of. Our “build” button (for building houses and the like) was a picture of a door. We were wondering why so many people were having trouble finding the build menu considering it was in the tutorial when we realised that a door is tacitly understood as an “exit game” button. So many little things like that. It's been a hell of a learning experience for us.

How much of these updates is fan driven?
I'd say about half and half. The new content we add is all our own ideas for what we think would make a cool new level or item (the latest thing we added was typically Australian - lamingtons! [a popular Aussie cake]), and fan feedback is usually a glitch or inconsistency we didn't pick up in QA. We played the hell out of the game before launch, but being that there's only two of us and a little help from our friends, there was just no WAY to test such a huge game and really have put it through its paces. For the most part, though, people have been patient and understanding that we're a really small developer. We've tried to respond to feedback as much as possible, and the fans we have seemed happy to engage in that communication and receive post-launch support.

So it’s a balance between adding to the experience, and finding elements you want to fine tune?
Yeah it's both. Generally, Rohan [Harris – Leigh’s brother and Flat Earth Games’ co-founder] is working at fixing or tweaking something to make it better (we're currently revamping the whole cooking system - we've realised how much you have to micromanage that stuff once your town gets large and we want to streamline it), and I'll be creating new maps alongside him.

We’re seeing a lot of console games starting to position themselves as platforms, rather than one-off experiences. Games like Destiny, for example, will simply grow over time rather than receive sequels – this seems like an approach well-suited to iOS. Is this how you see TownCraft and if so, how do you feel this benefits the game?

That's an interesting question. We've specifically chosen to go for an old-school approach to the business model for TownCraft. You pay $5 up front and we'll keep updating the hell out of it. If we ever were going to add to the game in a big way, it'd be a sequel or a full-on expansion pack. There are no plans to make TownCraft a platform of its own per se, but the experience of creating it has certainly opened our eyes to other ways of structuring your game.

I've recently been thinking about it this way: TownCraft is a much, much better game now than it was last July when it came out, so anyone buying it now for $5 is getting a much bigger and better experience than those people who took a chance on us in the early stages. Whenever we go on sale (we've done it only twice since launch), I feel kind of icky, like the original fans have been shortchanged by having to pay more. So we're looking at maybe borrowing from what The Castle Doctrine (and indeed Minecraft itself) have done and charge less at first release for future games and slowly increase the price as the experience gets better. But this is all speculation, these are just ideas at the moment.

Finally, can you talk through what is in store next for TownCraft and fill us in on any other projects you may be working on?
We're very close to the iPhone and Mac desktop launch for the game. Expect both to drop in mid-April. We've got ideas for what we'd want to do with future TownCraft titles, but haven't started anything outside of basic design documents at the moment.

We are working on an entirely new game, which we haven't announced yet, but it’s the polar opposite of TownCraft in many ways. Where TownCraft was friendly and accessible, we're working on a game which is designed from the ground-up to be an extremely hardcore experience. Without giving it all away, it's a space trading game, and we'll probably announce it just as soon as we're done getting iPhone/Mac TownCraft out the door.

You can grab TownCraft here! 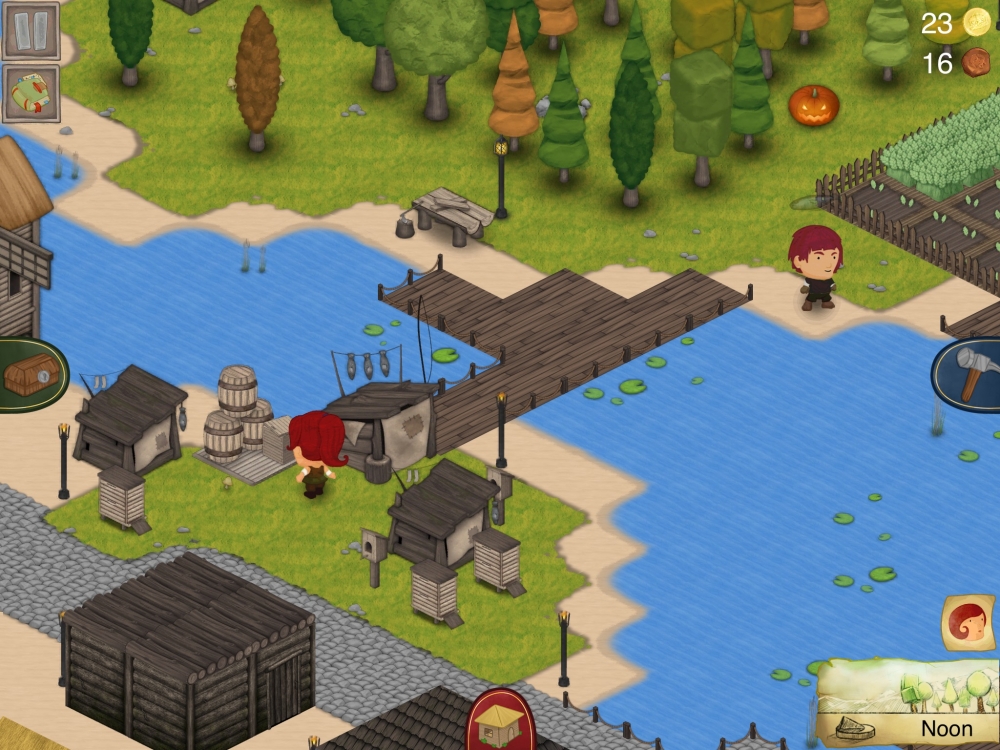