We were extremely excited earlier this week to break the news of Tin Man Games’ partnership with renowned choose-your-own-adventure gamebook pioneer Joe Dever. Tin Man Games is the leading developer in the rebirth of the classic gamebook experience many of us remember fondly from our youth, reinvigorated for modern touchscreen devices. All we knew from the initial reveal was that Tin Man Games and Joe Dever had signed a deal to create games based on his late eighties post-apocalyptic Freeway Warrior series, so we dropped the studio a line to find out more. Creative director Neil Rennison answer our eager questions, with a little input from Joe Dever himself, too.

In your mind, what legacy and influence has Joe Dever played on the evolution of gamebooks?
For me, Joe is one of the gamebook masters. He was the first gamebook writer to actively structure a world and ongoing continuity in much the same way as the great fantasy writers did like Tolkien and Feist. Magnamund and the sagas of Lone Wolf are so wonderfully fleshed out, it’s no wonder that readers continue to have a love affair with the epic series. It’s the closest you can get to solo-playing in a large tabletop RPG campaign. Joe was also able to create a detailed ruleset for the books that felt a bit more grown-up than some other gamebook systems, while not becoming too complicated for a quick bit of solo gamebook adventuring.

Can you talk about how this partnership came to be?
Yes! We met recently at Dragonmeet [a convention held in the UK] and had a spot of lunch together. Dragonmeet seems to be a bit of lucky charm for me as it was there that I met Ian Livingstone for the first time, a couple of years ago.

Speaking of Livingstone, you’ve already worked with some of the greats from the genre; what does this partnership mean to Tin Man Games?
A great deal! As young teenagers in the 80s, many of us read Lone Wolf, which inspired so many role-playing sessions and adventures. To us Joe is part of that pantheon of great gamebook adventure writers and we now have the chance of creating something new (from something old) with him – it’s very exciting. The Tin Man Games team are really excited.

Can you talk us through what the partnership entails and what your plans are for the four Freeway Warrior books?
At the moment it’s early days and we’re honestly unsure. We have a few big releases to work through this year, some of which will use our new gamebook engine. Depending on how those go will dictate the direction we take with Freeway Warrior in terms of presentation and whether we have them play out like digital gamebooks, as many of our current books work, or take them out of the “gamebook” context into a slightly differently presented adventure game. Whatever happens though, the text and narrative will remain a key component – text adventuring is very important to us. My gut feeling at the moment is that all four books will be combined into one mega-app that plays through consecutively.

I get the impression Joe Dever is quite hands-on with game development; how involved will he be with the team?
We’ve talked a little about that and Joe will be consulted about any changes to the books. One of the interesting decisions we have to make is whether we keep the timeline of Freeway Warrior as it was written or update it to fit in with the modern political era. In the original books, Jan 3rd 2012 is the day when all the nuclear warheads are triggered around the world, so it may need a bit of a re-write. Having said that, books like Watchmen have toyed with the idea of an alternate past resulting in a different future, so that could also be an angle.

Did you get a chance to play Lone Wolf: Blood on the Snow when it released for iPad last year; if so, what were your thoughts on it and what can fans of that game anticipate once the Tin Men get their hands on his work?
Yes I did have a bit of a play with Blood on the Snow. Not as much as I would have liked mind you as we’re incredibly busy. I really enjoyed my time playing it though. I think the presentation is superb and I love the way that it slots narratively into the Lone Wolf timeline, which makes it feel like old Lone Wolf – I always love a bit of nostalgia. We definitely won’t be going the route of 3D animated battles as it’s not really our style, but our new gamebook engine has been designed to cope with some new yet unannounced combat mechanics, so we’ll see how it all pans out.

Any thoughts at this stage about a release window?
Not yet. We’ve got a few big gamebook projects to work through this year including Sagas of Fire*Wolf, more Fighting Fantasy (most notably The Warlock of Firetop Mountain), Grailquest and Way of the Tiger. If I was a betting man, I’d punt for early-middle of 2015.

Thank you to Neil for his time – certainly exciting times for gamebook fans. I distinctly remember the cover of my Warlock of Firetop Mountain gamebook from all those years ago – it’s going to be an exciting year indeed. 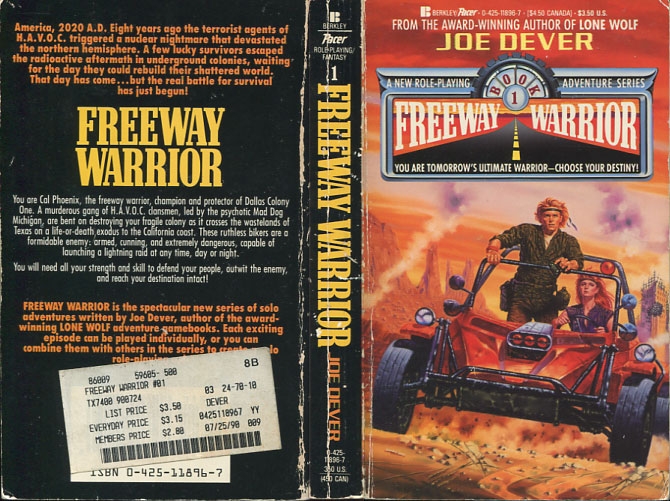