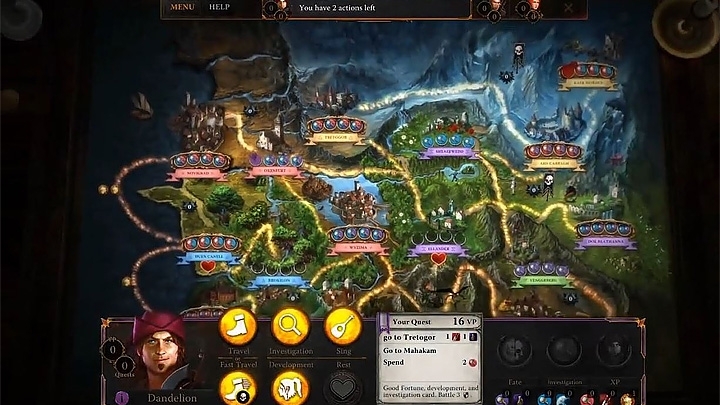 It’s a sign of the times that many board games are released in both physical and digital forms simultaneously nowadays. On tablets, fans have found an alternative playmat, and one worth paying attention to: we’ve been very lucky to have developers creating great adaptations of must-play games like Agricola, Small World and Ascension in recent times. And, of course, the reigning champ, Lords of Waterdeep.

I’m not exaggerating when I say that The Witcher: Adventure Game, a surprising tablet spin-off to the blockbuster and console RPG series by CD Projekt RED, is planning a coup on Lords of Waterdeep sovereignty. The mechanics are similar, and Waterdeep fans will encounter enough common elements to be easily drawn to this new universe. But for the millions of diehard lovers of The Witcher IP, my hands on time thus far suggest it will be irresistible. I’m not just talking about fans of the games, either. It’s also a great experience for people who are slightly reticent to the PC adaptations, but love Andrezj Sapkowski’s books. Despite the evident limitations, it’s a very narrative-driven game with fine and evocative art that make it both visually delightful and deeply immersive.

For more on my thoughts about how The Witcher Adventure Game is services fans of the novels, read my opinion piece in Episode 7 of Grab It.

The objective of this game is simple and precise: you must complete a certain number of Main Quests (usually three, but you may set the number before the start) by fulfilling its requisites. When one player finishes the last Main Quest, the game stops and the player with more points is the winner. Doing other minor quests and slaying monster along your road will also give you those vital victory points.

At the beginning, you choose one character from the four familiar faces; Geralt, of course, Triss Merigold the charming (and gorgeous) magician, the dwarf Yarpen Zigrin and Dandelion, who’s half rogue, half bard. Each one has their own strategy pathway - focused on combat, wizardry or a mixture of the two - and their own development deck, with exclusive cards that match that strategy. Every character can also use a special skill: Geralt can brew one of his potions, Triss can prepare her magic for the next assault, and so on.

You may make two actions in your turn, chosen from normal travel, fast travel, develop, investigate, use a special ability or rest. Travelling between locations and resolving investigation cards are the main means of progression, since they will allow you to get leads, which can be converted into proofs. Proofs are usually a requisite to complete a quest, along with other minor tasks. On your journey, you’ll also encounter enemies - beasts or men (their colour, gold, silver or bronze, determines the danger - or draw foul cards that pit you against the worst antagonist of all: Fate. Fans will be unable to ignore the War Track either: even when random beasts give you a break, the Nilfgaardian Empire will move around the board, restlessly, in a silent but lethal march.

I love how The Witcher Adventure Game includes vital lore like this from the original books. But perhaps what I am really enjoying most with the game thus far, are the sheer number of variables, with many forces working around the board even when we’re not looking - and we’re not (only) talking about the other players! The Witcher Adventure Game is easy to understand, but it does take a while to acclimatise to the controls and master its clockwork-like universe. You’ll bite the dust often, too, beaten by an unfortunate dice roll or by a twist of fate that you can’t foresee.

Luck and strategy, however, are well-woven into this tapestry. We’ll learn soon how to compensate a bad roll with a wise use of our cards as the game inches closer to its release. And, even more importantly, we’ll learn how to deal with risk. How to make a leap of faith, choose the lesser evil and deal with it, in order to accomplish our goals. Which is never a bad lesson.

Reference:
- Episode 7 of Grab It
- Lords of Waterdeep
- Ascension: Chronicles of the Godslayer
- Agricola
- Small World 2