The multiplayer FPS where every player is invisible receives a huge update; read the world exclusive making of in Grab It. 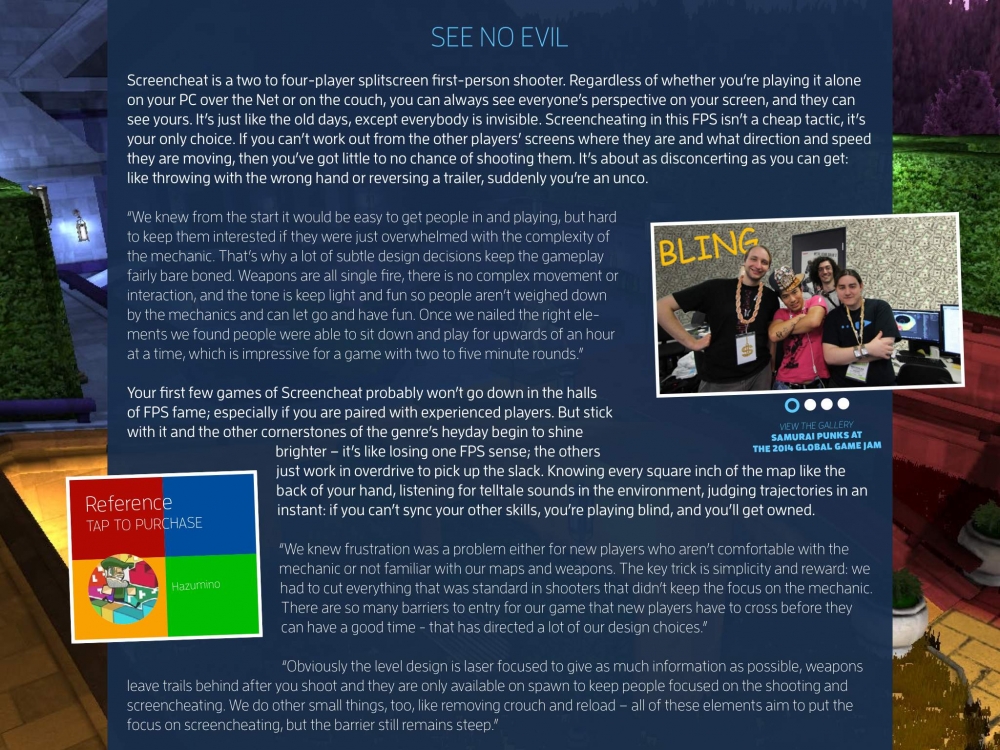 The words “online multiplayer FPS” and “you’ve never seen anything like this before" rarely co-exist in the same sentence, but here we are. The concept for Screencheat involves up to four-player splitscreen old-school deathmatch style combat. The twist it that regardless of whether you are playing on the same couch or online, you can always see your opponent's screen.

This is because you and the other competitors are invisible. As a result, the only way to play is to cheat by looking at your opponent’s screen. Seeing the world from their perspective, you can try and estimate their position and fire. An arsenal of classic and truly bizarre weapons, and tight, smartly executed levels add to the chaos across a range of modes. It’s incredibly challenging at first, but as you master this strange new perspective, the experience evolves into something truly unique. Games between veterans are masterful cat and mouse displays of strategy and sudden bursts of crazy activity.

As part of our epic Episode 8 of Grab It – a digital iPad magazine focused on indie gaming – we spoke in-depth with developer Samurai Park Games, and in particular managing director Nicholas McDonnell, to create a full making of feature on the title. It was one of six showcased titles among 68 indie game interviews and previews to feature in what’s believed to be the biggest indie game focused publication ever made.

The other games to get the full making of star treatment were Expand, Assault Android Cactus, Gunscape, Wave Wave 2.0 and Airscape: Fall of Gravity.

You can grab Episode 8 here for your iPad.