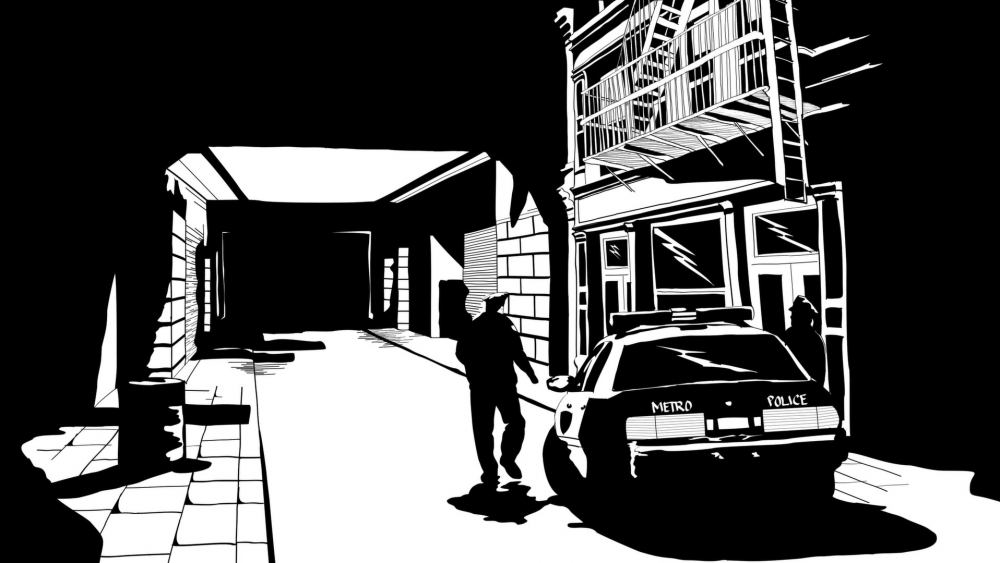 After finishing the first episode of The Detail, I felt like having a shower. In all my years of gaming, The Detail is shaping up to be one of the darkest games I have ever played, dealing with issues that would never be raised in polite conversation. As a noir-inspired crime adventure set in a modern American city, there is little new ground to be broken in this genre. In fact, Rival Games has eagerly cited inspiration from Telltale Game’s The Walking Dead and HBO’s The Wire. But Rival Games has brought something to the table that borders on being a masterpiece. The Detail is confronting. It is bold. And it's something that should not be ignored.

Rival Games is unafraid to descend into the murky quagmire of human degradation, wallowing in the lowest filth we are capable of producing. Right from the opening sequence, we join up with two police officers as they seek to apprehend an alleged child molester. It sets the tone for the game and is a particularly confronting scene, especially so early on. From there, the issues dealt with only spiral further down into the worst humanity has to offer – drugs, murder and sexual violence. It reminds me of the 1993 adventure game Police Quest: Open Season, which dealt with some very confronting issues, including an opening scene of a young child who had been murdered and discarded in a dumpster. If that sounds pretty full on, it should. Don’t expect a light-hearted detective romp.

These are topics where other game developers fear to tread, and I am appreciative that Rival Games has developed a mature game for mature people. Admittedly though, I am glad for the break in between episodes so that I have time to mentally prepare myself for Episode Two.

As the opening scene unfolds, the potential of The Detail is laid bare. Without spilling too many plot details, I was thrust headfirst into a gripping interrogation scene. The perp had some vital information that I needed, but how far was I willing to go to get it? Should I be a good cop or go Jack Bauer on his arse? Taking clear inspiration from any Telltale game, a series of choices unfold, none of which are necessarily right or wrong; most are tinged with a morally deep grey. 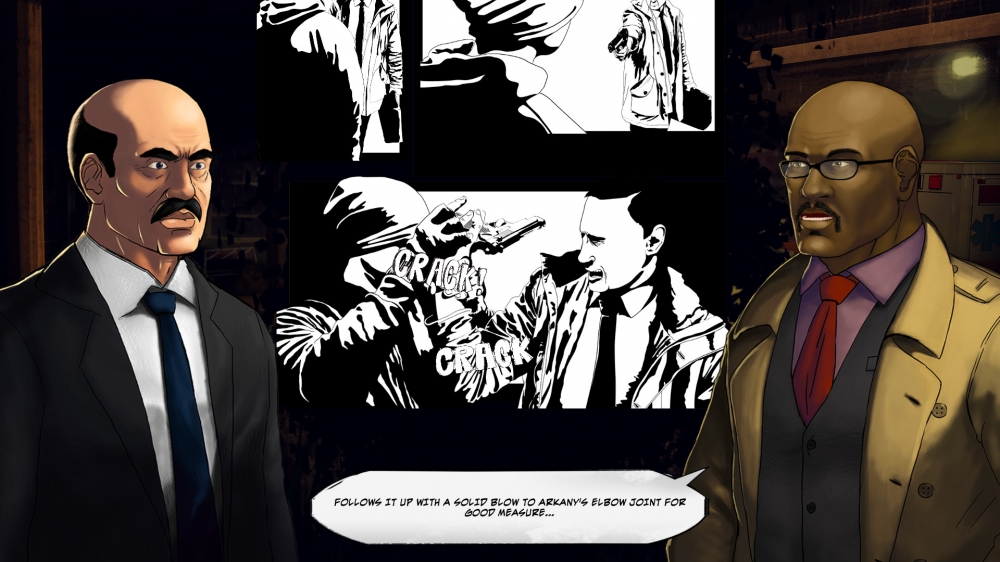 While moral-driven choices in games have become popularised over the last few years, the choices presented in The Detail achieve a sense of realism not replicated elsewhere. In a series like The Walking Dead, while the moral choices are very real ones to make, they can be rationalised away. These are choices affecting fantasy characters in a fantasy world. But in The Detail, the issues being dealt with are ones that pervade our world and cut through our soul. How far would you go to rescue a child in the clutches of a child predator? Does the end justify the means to rescue that child? These are powerful questions that search us deeply.

Unfortunately, the powerful opening is never quite recaptured in the rest of the first episode. There are certainly difficult choices to make, but they are ones that don’t require as much spinning of the moral compass. Nonetheless, I still thoroughly enjoyed it. Like an episode of The Wire, The Detail feels like compulsive viewing that can easily be binged on. In the 1.5 hours it took to finish the game, I never once put my iPad down.

It is difficult to tell at this early stage but I have an inkling that we are only presented with an illusion of choice. As much as I genuinely struggled to make some choices within the game, I’m not convinced they are going to have much long term impact on character development or the narrative. Perhaps it’s wishful thinking on my part, but I would love to see much more concrete consequences resulting from my actions rather than a “Clementine will remember that” caption. However, only time will tell in future episodes.

The gameplay is rather light on, again similar to any title from Telltale Games. There is some sleuthing and exploration to do, but the use of interactive “hotspots” truly reduces the game to a point and click. This one is all about the story and that’s ok with me. The one thing that didn’t work is a set of poorly implemented minigames. Similar to The Walking Dead, some contextual actions – like combat or chasing a perp – require quick swiping and slashing on the screen. One scene where I had to disarm a perp was an exercise in frustration. These need to be redesigned or eliminated entirely.

The game is primarily told through the eyes of a grizzled veteran detective investigating a brutal gangland murder. Rival Games nails this character completely. I truly believed that he was a cynical, bitter and hot-headed detective who had seen way too much evil throughout the course of his career. A nice feature is that as the story progresses, we are gradually introduced to new characters, some of whom the player is able to directly control. The changing perspectives are well implemented, ensuring the story moves along at a cracking pace. 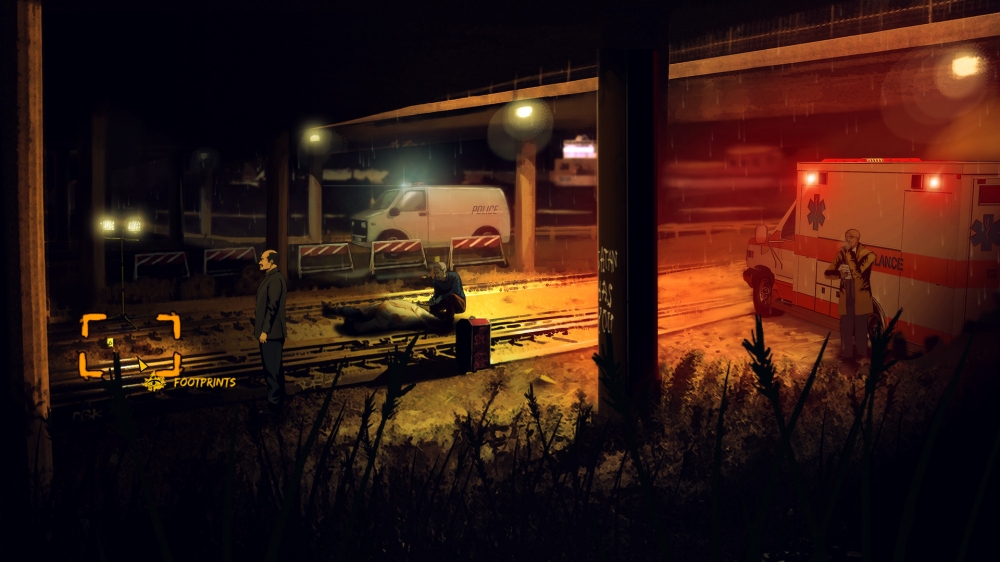 The Detail is one of the most amazing looking games I have played, capturing a Frank Miller-esque graphic novel layout. - think a darker version of Tin Man Games’ Appointment With F.E.A.R. The animations are sharp and gorgeously detailed, in a dark and foreboding manner. Rival Games is perfectly in tune with the use of colour, with some scenes being only black and white, while others pop with colour depending on the context. I love that it feels like I’m playing a graphic novel, which feels quite appropriate for a noir crime adventure.

I should also make the point that I don’t remember the last time I heard such a memorable soundtrack. The music captures that iconic dark and gritty noir setting. It fits perfectly with that vision of a Max Payne-esque, seedy underbelly of a bustling American metropolitan city where no upstanding citizen would ever be seen. Considering the issues being dealt with, Rival Games has completely nailed it.

Rival Games has kicked off The Detail with an unforgettable first episode, setting a very high bar for itself. With so many different story threads started, the challenge will be to weave those threads together into a rich and satisfying tapestry that involves the player. And this is all while seeking to recapture that explosive opening where the player is pushed to look within themselves without necessarily finding a “right” answer. From what I’ve seen, I truly believe Rival Games is up to the task.