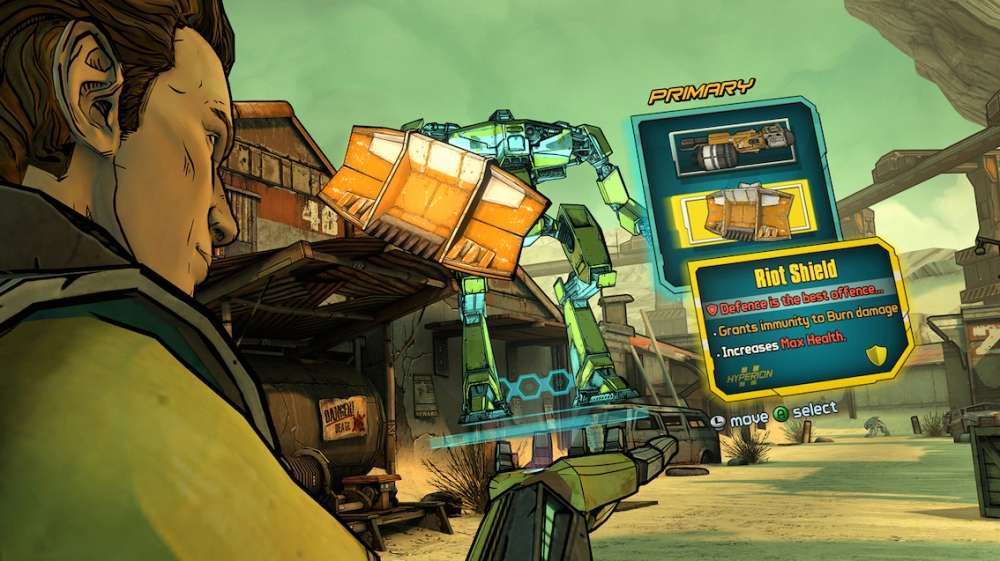 Since its creation, the Borderlands universe has become known for its rewarding loot-fests, grinding RPG elements, wasteland setting, and plethora of masked psychos, skaggs and ruthless vault hunters. The first game was also known for its almost complete lack of story. Some enjoyed jumping straight into the action without having to sit through lengthy cutscenes; others pined for something more - a motive to keep grinding. With one of its two latest adaptations (the other being Game of Thrones - A Telltale Adventure), Telltale Games (The Wolf Among Us, The Walking Dead) has flipped the franchise on its head, doing what Telltale do best and scrapping conventional gameplay elements and focusing on a beginning to end, immersive narrative experience. And Tales From The Borderlands is one of the studio's best yet.

Set after the events of Borderlands 2, Episode One of Tales from The Borderlands is told as a frame story (a story within a story) through our two playable characters, Rhys and Fiona. It's an uncommon structure for storytelling in a video game, but one that works extremely well, resulting in what is hands down one of the most hilarious games I have ever played.

It all starts with an enigmatic masked man(?) dragging Rhys through the desert. Rhys, a Hyperion employee on the cusp of a life changing promotion, tells his version of the events that lead him to Pandora and his current predicament. After spending some time with Rhys and his eager buddy, Vaughan (voiced by the wonderful Chris Hardwick of nerdist), we get to hear the story from Fiona’s perspective. As the story overlaps when the two characters finally meet, players are given the chance as Fiona to remember the events told by Rhys from her own perspective. Both characters are deceptive; one is a charming corporate chump, the other a seasoned thief, and it's never made clear whose version is actually true. But this storytelling device lends itself to some of the game's funniest moments where we constantly see Rhys, a victim of hubris, levelled by Fiona’s version of the story.

My only beef with the story - and it is very much a personal one that you may or may not share - is that it's hinted that Handsome Jack will play an integral part over the course of the season. I'm over Handsome Jack. With the Borderlands console sequel, 2K Games hit gold with the villain, who was met with much appraisal from fans and appeared on a number of "best bad dude" lists between 2012 and 2014. Handsome Jack has slowly grown into a sort of figurehead for the franchise, with the latest console addition, Borderlands: The Pre-Sequel, basing its entire story around his origins. Ever since this character exploded in popularity it’s like 2K Games has put a red line through its future Borderlands line-up and added the comment "needs more Handsome Jack." The Pre-Sequel even offered a Handsome Jack doppelganger as a playable character, which came with two of its own Handsome Jack Holograms.

With Tales From The Borderlands, I was hoping Telltale would be given the opportunity to craft its own bizarre and magnetic villain, which it's proven can be done with the bandit leader, Bossanova - a dub step loving, death race host. But it seems Handsome Jack is here to stay, in one capacity or another. That being said, the manner in which Handsome Jack is introduced in Tales From The Borderlands is very clever, and sets up one of the game’s most interesting plot twists, so I’m thankful for that at least.

Although Tales From the Borderlands is heavy on the story, it’s also the first time Telltale has experimented with various other gameplay mechanics. Thanks to the Loader Bot, the helpful Hyperion bipedal, players are given the chance to change loadouts and even out the odds for our pen pusher heroes. Rhys has a synthetic "echo eye" that you can switch on in any environment, adding an extra layer to exploration, and Fiona uses currency as a means of bartering. In fact a lot of Fiona’s choices come down to resource management, and the story pushes you to wager whether the use of a certain item would benefit you now or later. At first I was happy with my choices when managing cash and inventory, but as the story progressed I found that I had become too pragmatic with my decisions, and this was at odds with the cutthroat character I had begun to mould Fiona into.

Shaping the two main characters was, perhaps, my favourite part of Zero Sum. I've read many an article arguing that, despite all the "choices" given in contemporary games, there is still no real freedom. But the way in which my actions in Tales From The Borderlands drastically changed smaller outcomes and character traits, but left the larger story in tact, says something about the mastery behind this branching "choose your own adventure" style story.

Tales From The Borderlands is, in my opinion, best described as Disney's Pixar for adults. You’ve got the strong, down to Earth female lead, who balances out the overconfident male, along with a supporting cast of loveable characters, all capable of their own spin-off or sequel. There’s even a cute, giant thing, a la Groot or Baymax, in Loader Bot. All of this, plus the all too familiar voice cast - which includes video game regular Troy Baker (The Last of Us, Batman: Arkham Origins, Far Cry 4 and way too many others to list), and The Tick’s Patrick Warburton, adds up to a violent cartoon experience that gives its animated silver screen counterparts a run for their money. And even if it does rely a little on what’s proven to be popular amongst fans (name a franchise that isn’t guilty of that), there is still so much that is fresh and unconventional for both Telltale and the Borderlands universe, it helps Tales From The Borderlands stand on its own two feet as a thrilling and chuckle inducing experience.

Tales From The Borderlands is out now for iOS, Grab It here.

References:
- The Walking Dead
- The Wolf Among Us
- Game Of Thrones - A Telltale Adventure
- Tales From The Borderlands