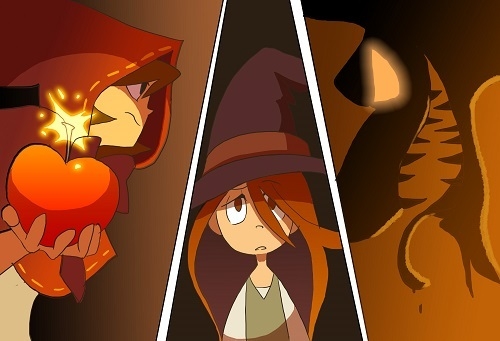 During our most recent browse through the many great games seeking love on Kickstarter, we came across the intriguingly titled Once Upon a Runner. Its gorgeous hand-drawn art caught our eye, while its desire to imbue a sidescrolling runner game with a full fairy tale influenced narrative, boss fights and traditional level system helped further draw it out from the crowd. We got in touch with creator Jasmine Greene from developer SaltyPepper Games to find out more on her goals and plans for her title:

We love the idea of bringing stronger narratives into the endless runner genre; can you give us some insights into how deep you are going with the story?
We wanted a way to stand out from the crowd. So often you're thrust into the endless running game without any idea of why you should care about the runner. Take Temple Run for example. You know that he stole some artefact and now he's being chased, but there's no build-up. We wanted to provide people with a reason to play the game and care about the characters. In the comics that tell the tale, you get to follow Ella's story and see her change from a girl that needs protecting to being the one who saves the day. She grows up through the course of the game.

What games, comics and even animated films have inspired you while making Once Upon A Runner?
There's a scene towards the end of the game that is a nod to Popeye. I would say that Disney was an inspiration in a way, although we wanted to make sure that we did not remotely copy any characters from their movies. In general, I would search for cool reference pieces which our artist, Grace Liu, would then translate into her style. While I can't speak for her, her style reminds me of Samurai Jack.

Each level has a unique boss fight; can you talk about how these battles play out and feel “boss like” compared to other fights?
Well they're separate instances first off, so you know when you'll be entering a boss fight. You'll be going head-to-head against these bosses, whether it's avoiding whatever they spit out at you or bringing down their HP. The boss fights will be more challenging and definitely will keep you on your toes. When you finally beat them, you'll definitely feel that sense of achievement.

The game’s got a great visual style: why was it important to you to go with a hand-drawn approach and how does the change the dynamic of making the game?
We really wanted to have something visually appealing for the audience. With such a huge amount of 3D and pixel-based games on mobile, we figured that a hand-drawn approach would really stand out. We've gotten a tonne of feedback and almost everyone that plays the game is in love with the art style. As far as changing the dynamic of the game, from a technical standpoint it unfortunately makes the it difficult to reduce in size since we don't want to diminish the quality of the finished product. In terms of gameplay, it's made us think of interesting ways to utilise the art style with the boss fights and even the placing of the in-game comics.

Considering it is a level-based experience, how will endless mode work – will it loop the stages together? And what will make Hard Mode harder?
In endless mode you will get to choose which level that you want to play from the six that are available rather than looping them altogether, though we are also thinking of adding that option in as well so people don't get bored looking at the same background the whole time. For hard mode there will be a couple differences: The game will move faster; the bosses will be harder; the obstacles will be randomised (in easy and normal, they are fixed so players can learn the course). We also plan on adding a couple other modes as well, like sudden death, where you only have one heart to get through the entire level and if you die you have to restart from the beginning of the game.

Anything else you'd like to add?
Our community is very important to us. As backers, you're not just getting an early copy of the game or the other rewards listed, you're literally starting up a new indie game development company and allowing us to create more games for you! That's why we welcome any feedback on our games. You can visit our site.

Head over to the Kickstarter now and give it some love.