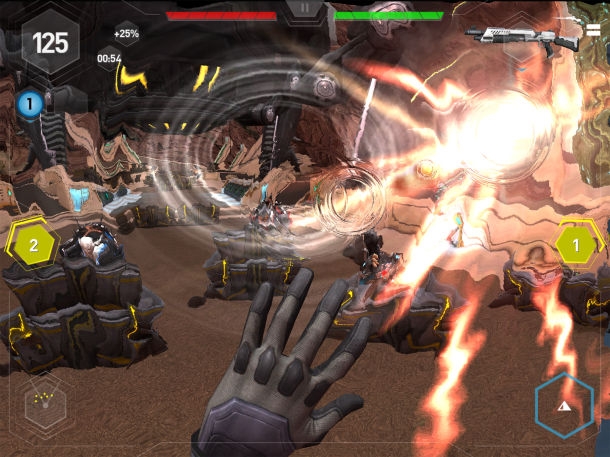 Will Midnight Star reimagine the FPS on touchscreens? We’re about to find out. The game is being developed by Industrial Toys, a studio founded by Alex Seropian who, in a former life, reimagined the FPS console as owner of Halo creator Bungie – he has the pedigree. We've been following the game with great interest ever since it was announced. In fact, we ran a huge world exclusive making of feature on Midnight Star in Episode 7 of Grab It, talking with both Seropian and another former 12-year Halo veteran Paul Pertone, about the game’s creation. You can grab the feature here.

With the launch date set for Feb 5 (this Thursday!), we touched based with Industrial Toys and spoke to co-founder Tim Harris for an update on the title.

With Midnight Star’s global release fast approaching, how are players reacting to its unique approach to the shooter genre?
We’ve been excited by the reaction. Across our soft launch territories (Ireland, Sweden, Philippines, New Zealand, Australia), we’ve had players going deep (in some cases 75-100 hours), playing tonnes of multiplayer Challenges and giving us feedback. It’s a very different shooter, but we think we’ve got something special.

Have you been receiving some helpful feedback from players, and are there any suggestions you would look at taking on board in future iterations/updates?
Absolutely. Throughout our soft launch we’ve gotten suggestions and feedback that we’ve incorporated into each release. We’re watching where players spend their time, what they upgrade and where they get to in the game. We’ve had players express interest in more systems that let them connect with other players, show off their accomplishments and deepen their experience. These have all gone into our roadmap of features that will make their way into the app in updates.

What kind of audience has Midnight Star attracted? Are there more casual players, core gamers, or are you seeing a healthy mixture of the two?
It’s been a natural mix so far, but we’ve only been in soft launch with a few thousand players at a time, so it will be interesting to see how wide the net goes out once the game launches all over. It’s possible to get to the end of the campaign on Normal difficulty once you pick up the necessary skills, so the game is very accessible - however, once you start paying Psychotic mode for the big rewards, you need to be skilled and have good gear. We’re watching our core players put 70, 80, 100 hours into the game already and what they can pull off in terms of scores and Challenges is impressive.

Midnight Star focuses on “reimagining” FPS for the touchscreen generation. You’ve addressed a huge problem here with mobile shooters, and it’s what initially lured me to Midnight Star. However, throughout development we’ve seen Industrial Toys test various mechanics for player interaction that have since been trashed (such as swiping to control the camera). Was it an easy decision once you found your current control scheme, or were there other options that nearly made the cut?
Once we figured out the fundamentals of our control scheme, we just iterated from there. The key basics are touch to shoot, two fingers to shield and pinch to zoom, along with camera controls (we call them threat indicators) that sit on either side of the screen so players can control the battle on either flank. Getting good at those basics is really satisfying and becomes more fun the better you get at it, which is always what you search for in an action game.

The rest of it was a big iterative experiment, though. We tried what you mentioned with swiping; we messed with free camera control; we put the reload mechanics in all sorts of different places. You’re right, our ambition wasn’t to port over ever shooter device you've seen on console or PC - it was to make a uniquely mobile shooter with fun and precise touch controls. 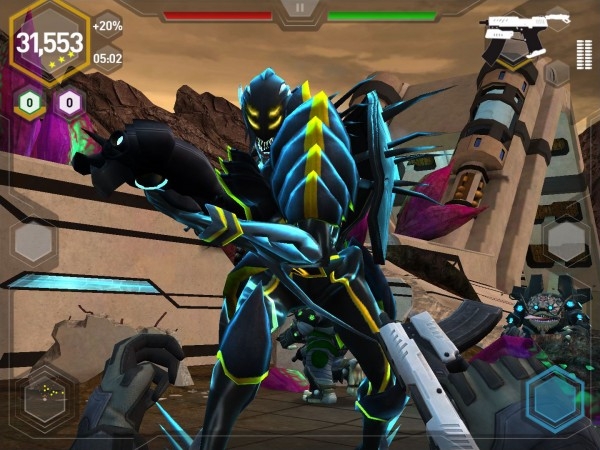 These intuitive controls are made possible due to the semi-on-rails level progression. Since Midnight Star was announced, there’s been a lot of contention in user comments about whether a shooter with on-rails movement can be classified as a FPS. And judging by the way it’s tossed around, on-rails seems to be a dirty word. Having experienced Midnight Star, I can personally say that I wouldn’t have it any other way, and it is unquestionably deeper than the on-rails moniker suggests. How are you combating the preconceptions of people who have yet to pick up the game?
Just by encouraging people to try it. A few minutes into the game, players get how special it is, so we’re not spending a bunch of time defending our decision to move the player around. Once you get good at it, the game is a frantic dance of action and depth and it’s just fun. That’s why we’ve stuck with the word “reimagining.” We’re not trying to supplant anything from the past - we’re just trying to make something that’s super fun and takes advantage of the platform we made the game on.

Likewise, the free-to-play model surely attracts its fair share of criticism. These criticisms are more directed towards casual games like FarmVille and The Simpsons: Tapped Out, rather than say Hearthstone or World of Tanks Blitz, which are both more honest with their monetisation and have found success in the realm of F2P. Was it always the plan to make Midnight Star free to play? And why should potential Midnight Star players feel confident in hitting that infamous “GET” button?
The amount of content and fun that a player gets without spending anything is incredible, and that was by design. We get that free games are in a position to prove themselves to players in a way that paid aren’t. With paid games, players have made a monetary commitment, so they stick around to see if they are going to get their money’s worth. With Midnight Star, we’re throwing a tremendous amount of value and fun at the player for free, and offering them opportunities to play in different ways faster with purchases. Our intention is that the deal is a fair one.

Unlike many F2P games, however, there is some serious competition in Midnight Star - the kind of competition where success rests on how well you can play and not the size of your wallet. The beat-a-dev Challenges and prizes are especially tantalising. Will these multiplayer events and real-life rewards be a mainstay throughout Midnight Star’s run? Can we expect another event like “The Final Countdown” anytime soon?
100-percent! Live events are a big part of what we’re going to be doing throughout the life of the game, allowing players a lot of choices to play for fun and prizes. Our weekly Challenges (like Midweek Rumble and Beat-A-Developer) will continue, along with a soon-to-be-announced option, where anyone can jump in and win. We’ll also start a series of sign-up based tournaments like The Final Countdown, where players will progress through brackets to a Finals for big prizes. The real-time event creator we designed to manage all of our live events now has support for Team Challenges, too, so that’s something to look forward to as we launch globally. 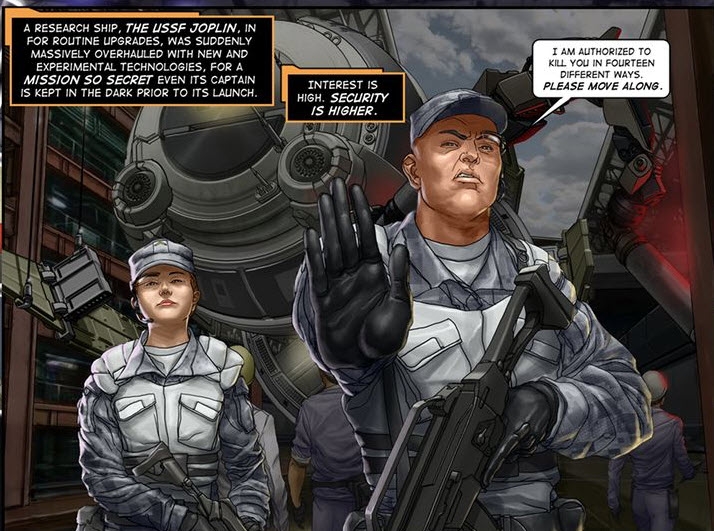 Being a huge comic book and sci-fi fan, Mike Choi and John Scalzi’s involvement really sweetened the pot for me, and I thoroughly enjoyed the interactive companion app Midnight Rises (which is out now). Are there any plans to enlist their services for another comic book instalment? Also, has there been any talk around the office about Midnight Rises being released in a physical format?
On the first part of that - yes. Mike is our lead concept artist, so his involvement in Industrial Toys and the Midnight Star universe is as deep as anyone on the team. And John is a long-term partner of ours in the world-building and narrative space. These stories are his, and he plans on staying involved. Don’t be surprised if you hear about an expansion to what we’ve done with Midnight Rises. Since it launched on January 29, we’ve gotten great feedback and a steady stream of people figuring out all of the secrets we hid in it.

As far as a physical format, that remains a debate. We did so many different things with the introduction of art, parallaxing frames and interactive choices, that we’re torn as to whether we can maintain the special nature of Rises on paper.

Midnight Rises and the quality cutscenes excel in establishing the rich universe of Midnight Star. I feel like we’re only scratching the surface here with The Dust. What is your vision of Midnight Star’s future past the subsequent episodes that have yet to be released?

You’re totally right - this is just the beginning. The plans we have for the narrative - and subsequent adventures for Charlie, The Dust and the Oberons - are extensive. Even the several-chapter arc that we present in Midnight Star is an introduction. Watch those little title cards that we display before dialogue sequences on the Joplin (the game’s spaceship and base) for hints.

On that note, how long should players expect to wait between episode releases?
Ha! That’s also something that we’re working through in our plan. Players can expect really frequent updates with features, tweaks and new stuff to play with, but our bigger drops of levels and chapters will take a few months to put together. The good news is, we’re already way into Chapter 2, and our first few updates are already coming together, so players won’t have to wait too long to get more in their game.

You may also enjoy reading our Step by Step Guide to Playing Quake III Arena on iPad.