At its heart, Kickstarter has a pretty straightforward premise. Developers showcase their ideas along with a variety of backer rewards and stretch goals, and depending on the quality of their pitch, the game will fall short, just scrape by, or completely surpass its funding goals. Though this is not always the case and sometimes game that are worthy of your money are unsuccessful - just look at Day for Night Games’ The Black Glove.

This mysterious game looked absolutely gorgeous and with a trusted team of ex-Irrational (BioShock) developers on board - and the support of Ken Levine himself - the game seemed like a guaranteed hit. Although The Black Glove was undeniably appealing to the peepers, a lot of prospective backers were left scratching their heads wondering what The Black Glove was all about, so the game never hit its funding goal. This is where Nik’s Kickstarter campaign for Albert & Otto excels. It’s a lucid exhibit of everything the game could become if it finds successful funding.

If you head over to the Kickstarter page you’ll find a slew of stylish backer rewards, such as coffee mugs, hoodies, controller skins and a 3D printed figure. Which is all very nice, especially if you’ve got a hungry loot monster inside of you (like me!). Yet what really sold me on Albert & Otto was the free playable demo. After spending some time in Albert & Otto’s monochrome universe I was sold. I’ve never so confidently poured my precious money into a Kickstarter project before. 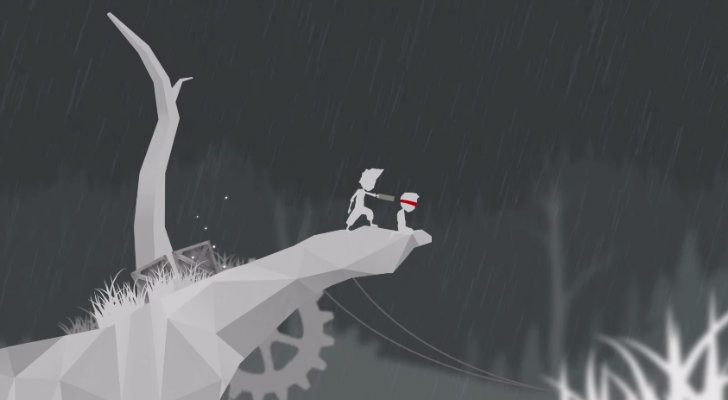 Albert & Otto is a 2D platformer that has you utilising both characters - Albert the boy and Otto the magical bunny - to solve puzzles and combat dark enemies. The story seems reminiscent of Braid, as it initially presents itself as a Super Mario Bros’ style “save the damsel” quest only to later reveal dark twists that question the protagonist’s version of events.

The gloomy trailer’s combination of childlike innocence and morbidity seems to take its inspiration from the likes of Tim Burton and Neil Gaiman, and should have any Coraline or Nightmare Before Christmas fans excited. So, if you’re a fan of cute, gothic play things, or even if you’re just itching to try out a new game for free, pop over to the Kickstarter page and see what Nik has to offer.