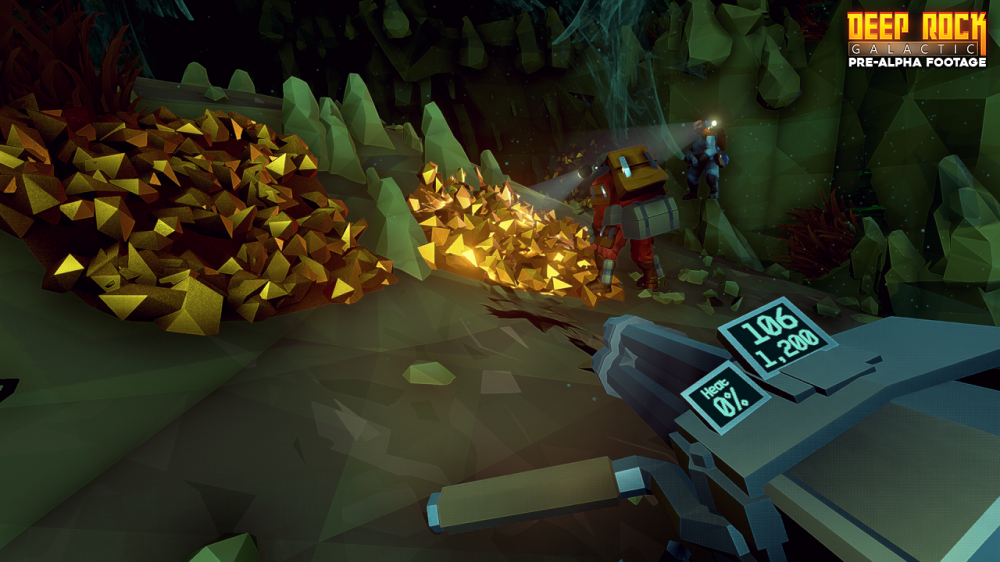 Early in 2016, when Microsoft closed Press Play studios (of Max: The Cursed Brotherhood fame), a number of veteran game developers found themselves looking for a new job. In that moment of uncertainty, six of them got together to form Ghost Ship Games and began their own independent journey with the motto “Co-Op First.” They've got some pedigree, too, with a combined CV that includes titles like Prince of Persia, Far Cry, Kane and Lynch, The Division and more.

I spoke to about developing Deep Rock Galactic, and although the game is still very early in development, the team is clearly aiming high.

I recently got a chance to test the latest build, which contained two levels - The Rookie Grinder and The Infested Chasm - and Ghost Ship Games' CEO Soren Lundgaard informed me that the objective was simple; “grab the gold and get out.”

While the game is big on ideas, the game's player characters are small in stature. The dwarves of Deep Rock Galactic are essentially a band of intergalactic mining mercenaries. They're part gunners, part miners, and all muscle. They get dropped into the most dangerous planets in the galaxy to shoot bugs and mine for gold. It seems like a lucrative (if dangerous) profession.

While the first level was a relatively simple cave-dive that took around 15 minutes with two players, the second was a far more complicated maze of caverns filled with environmental hazards and enemies that wanted to devour our bite-sized team of four dwarves. Throughout the caves of Deep Rock Galactic, you should expect to avoid lava flows, acid fumes that can choke you, monster nests, creatures that crawl on every surface and more.

Both levels boast totally destructible cave environments, and Lundgaard told me the final game would include procedural cave systems and “a simple mission-creator, so players can setup their own parameters for a mission and generate it.” 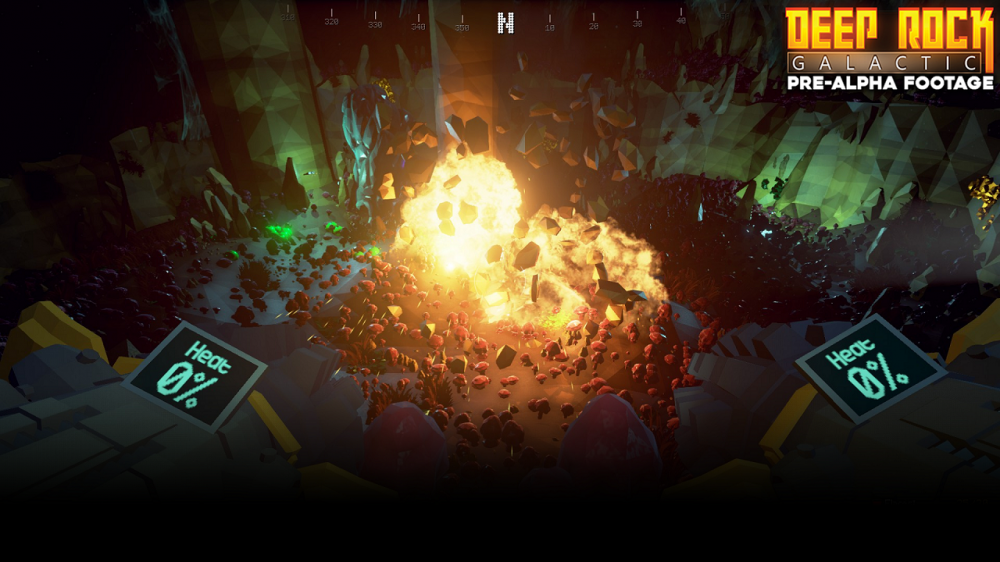 At the start of a level, you drop into a chasm deep below the earth with your team of up to four dwarves. When the digger doors open, you're greeted with an unsettling darkness that will stay with you throughout the dig. You toss flares into the abyss to shed some light on the chasm in front of you before setting off on your journey. Every time you enter a new cave the setup is similar, one of you will toss a flare and everyone sets out searching the room for gold or health crystals.

Before long you'll start to hear the inevitable scuttling of claws in the dark (these enemies are much like the bugs from Starship Troopers), and the hum of flying jelly creatures (think Metroids). They both come in groups and swarm your team, looking to pick off anyone who gets separated in the caves. I' was also shown nightmarish clips by Ghost Ship that reveal giant tongue-monsters that hang from the ceiling and leash players from afar to drag them into the darkness.

Lundgaard says that the team are looking for new enemy types to vary the gameplay and they “will probably be developed in 'families' of enemies, like a worm enemy and a number of variations of that worm. We also want to create elite versions with special abilities and an actual boss enemy would also be cool.” Each member of your team chooses one of four available roles at the start of each mission and that choice determines your equipment and gameplay style within the team dynamic. But Lundgaard and his team think of these more as “meta-classes,” because every dwarf remains highly capable in both combat and digging.

Your choices boil down to whether you want to be an Engineer and help out with gadgets and turrets. A Gunner who can provide the offensive backbone. A Driller with two huge augers on his arms. Or a Scout, with the invaluable long-distance flare launcher. All the dwarves are able to hold their own in combat, and all of them have some digging capabilities (naturally, they're dwarves). Plus, they're all capable of completing the objectives in one way or another. Lundgaard said that the team “want players to be able to team up and have fun, even if one has played a lot and the other has just started.”

Say you're at the bottom of a pit and there's gold halfway up, glinting at you from the wall. Each Dwarven class has their own way of getting to it. The Scout can fire a grapple hook and pull his way to the ceiling before cutting a hole into it. The Engineer has a gun that creates platforms against any wall and can create a path for the team. The Gunner boasts a zipline launcher to create passage for the whole team. And the Driller can just tunnel his way up through the stone like a gold-hungry ant. According to Lundgaard, Ghost Ship are looking into character progression and overarching narrative, suggesting that “character progression could involve unlocking new weapons and tools. It could also unlock more dangerous missions deep into the planet.”

My short time with Deep Rock Galactic was tense. Huddling in the dark and watching my last flare fade as the scuttling creatures closed in around me was like something from a bad dream. But the sense of discovery and curiosity that comes with throwing a flare down a deep and seemingly bottomless pit is indescribable. I can't think of another game that has fuelled my curiosity more. The promise of riches teases you each time you enter a new cave, and keeps you moving further and deeper into the dark.

Deep Rock Galactic is in full development right now at Ghost Ship Games, and is looking to make its way onto Steam Early Access sometime in 2017.