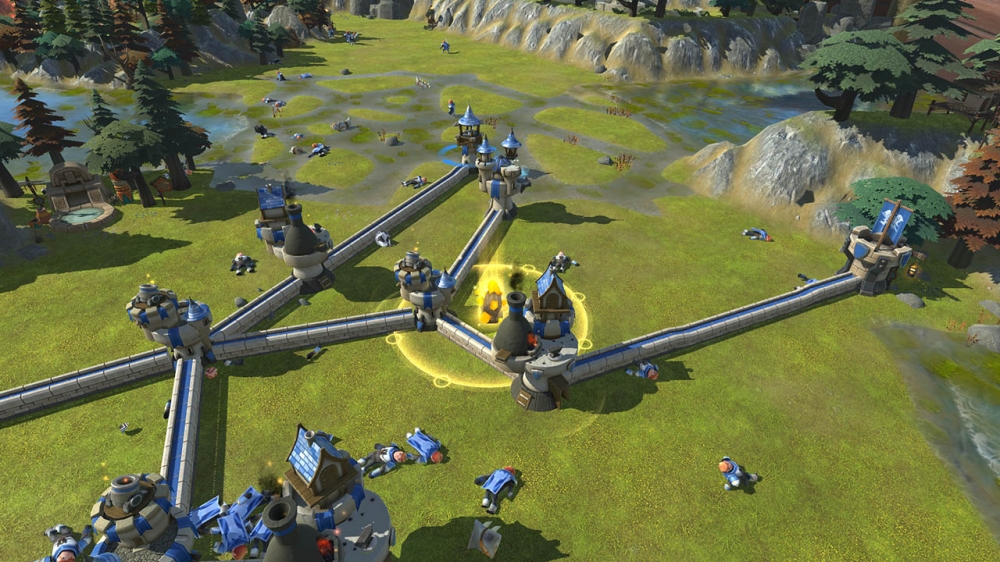 Imagine you're a medieval commander, looking down on your castle and signaling your troops to attack. You can man a catapult and deftly pull back the string, aiming across mountaintops and slinging the explosive projectile right at your opponent's castle. It's a wholly different experience to being a usual armchair-commander, and it's a welcome change that makes the whole experience feel fresh and alive.

Playing Siegcraft Commander is (unsurprisingly) about planning and tactics. The goal is to ruin your opponent's day by blowing up his home castle while keeping yours high and dry. You do this by building a chain of keeps and turrets across the battlefield, and spreading your influence. You select the type of tower you want to build (armouries, ballista, cannons, etc) then lob that tower out from you starting point like a projectile. It then automatically builds a wall from the one you're on to the one you just built.

This means that as matches progress, each commander builds a growing web of towers and turrets - some for attack and others for defense. You use this system to work your way towards your enemy and capture valuable resources to gain access to high-tier units.

Crucially, any tower that is destroyed by the enemy will also destroy any that were built off it and are otherwise not connected to the base. So discovering weaknesses in your opponents layout is crucial, because one well-placed explosive barrel could bring their whole war effort crumbling to the ground like a row of explosive dominoes. And vice-versa, ensuring your strategy minimises (or masks) these weak points is key.

Playing the game with the HTC Vive controllers took a little getting used to, but as soon as you click with it, the experience becomes quite intuitive. Essentially, you drag with both controllers together to move the map around, pull them apart to zoom in, and push them together to zoom out, just like using a mobile touch screen. Of course in room-scale VR, you can then walk around the battlefield and crouch if you want to get up close and personal.

When firing your cannons, or building, you select your tower, drag the controller towards you and move in a circle to fine-tune the aiming. Then you release to fire. Siegecraft Commander is also available in traditional control schemes without the VR headset, that way you can play with a mouse and keyboard, or controller if you're on console. You can also play hotseat matches in multiplayer and battle across platforms.

Siegecraft Commander has opened my eyes to how strategy gaming can unfold in VR. Now I want to play Cities Skylines in VR, or Total War Warhammer, or Black & White 2. Being a god in VR? Now that would be cool.

Siegecraft Commander is due out in early 2017 and you can find out more about it here.