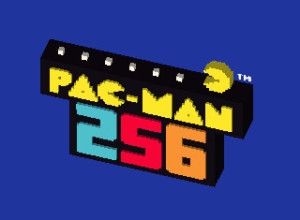 It takes a pretty big pair of power pellets to take on the task of reinventing an icon of gaming history. With Internet rage on a constant hair trigger, even a slight misstep in the treatment of such an icon could mean a career killer - and the list of competitors occupying the same lofty tier of reverence as PAC-MAN are few. We would suggest Mario, Space Invaders, and possibly Sonic for that short list.

So how did the partnership of studios Hipster Whale and 3 Sprockets - no doubt under the watchful eye of IP owner Bandai Namco - do? Is PAC-MAN relevant again, or should the makers of Crossy Road and Cubemen be looking for day jobs?

For those familiar with Crossy Road (and there are a lot of you out there), it’s not a huge leap to imagine the pattern of thoughts that led to PAC-MAN 256. The touchscreen directional swiping that guides your Crossy Road avatar has made the transition, and works just as well navigating mazes as it does the perils of roads and rivers. A nice touch - and one which adds to the authentic PAC-MAN feel - is the fact that once on the move along a corridor, you can swipe in your intended direction before reaching the next intersection or corner, meaning PAC-MAN will continue on instead of stopping dead and lying prone to prowling ghosts.

The top-down isometric view from Crossy Road also suits our pellet munching friend, as he weaves endlessly from bottom left to top right, with the option of being able to play in both landscape and portrait mode on your iDevice being a welcome inclusion.

Endless running as opposed to levels actually make a great fit for PAC-MAN in 2015. The inclusion of the modern mobile mechanic is given context by making the famous level 256 glitch the enemy from which you run. A wall of garbled characters threatens to swallow all in its path if you take too much time progressing forwards through the maze, much the same as the avalanche in Ski Safari, or the End of Time in Time Surfer.

Players however will still find enough time to take detours out of the way to collect fruit, power pellets and the newly included power-ups (more on those later). The ease of control makes for some close calls as you learn how much room you’ll need to be able to squeeze past a ghost on your way to reward. Arcade authenticity is once again evident upon learning that PAC-MAN corners faster than the ghosts, even though some coloured ghosts are faster along straights. This of course means that corners are your friend, and quick ducking and weaving will be a required skill to either learn or relearn - depending on your age.

Introducing a completely new idea to a classic game such as PAC-MAN is surely a tricky consideration. Anything new needs to work within the context of the game as remembered, or it risks breaking the original concept and creating an entirely new game. Thankfully, the inclusion of power-ups builds nicely on the original game, bringing welcome variety - a much needed commodity in an endless runner.

Each of the power-ups work beautifully within the context of historical PAC-MAN, so much so that they almost feel as they were always there. Some examples are a laser that shoots straight along your chosen path, obliterating ghosts in your way, a tornado that has a mind of its own hunting down the nearest enemies, and even a stealth mode which causes PAC-MAN to become unseen for a time. There are many, many more, the discovery of which are a fun surprise.

The power-ups only last for a short time, but can be levelled up to prolong their effectiveness by spending collected coins.

And that brings us to the monetisation. The free-to-play aspect of PAC-MAN 256 is handled respectfully, as players can actually never stop playing, ever. Not even to watch an ad. To play with power-ups turned on though means using a credit, with players starting at six credits, and one replenishing every ten minutes. Once out of credits you can keep playing without power-ups, or opt to watch a video which will either earn you credits or coins. It’s nicely balanced and playing without power-ups is essentially just classic PAC-MAN, reimagined as an endless runner. For free. Happy Days!

The opportunity for future updates is endless, with new and imaginative ways to kill pesky ghosts no doubt brewing away nicely in the labs of Hipster Whale and 3 Sprockets. The inclusion of interchangeable avatars such as in Crossy Road might be another avenue for longevity, as would be the inclusion of holiday themes and decorations.

Without doing anything particularly groundbreaking, PAC-MAN 256 has enough in the way of new mechanics and ideas to keep it fresh and relevant, while purists will certainly still be able to recognise a much loved old friend (the sound and music will have you from the start).