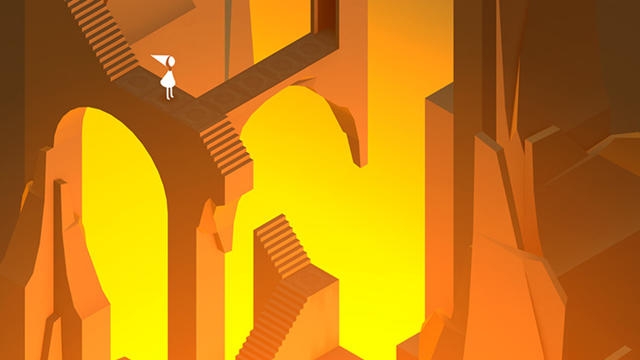 Monument Valley is easily a contender for game of the year. Not only did it top our mid-year Best 50 Indie iOS Games of 2014 feature, but we were lucky enough to get a world exclusive making of interview with developer ustwo, which we featured in Episode 3 of Grab It. As far as we were concerned, it only had one flaw of note; it was way too short.

When we interviewed designer Ken Wong for our making of feature, he was adamant there would be no more Monument Valley with the team keen to “do something completely different.” However, the sheer success of the game – 1.4m sales and rising – may have forced the team’s hand. An additional eight chapters – bringing the total to eighteen – have just found the light of day in the Forgotten Shores pack, made available for an IAP of US$1.99.

If the number of one star reviews hitting the App Store is anything to go by, many existing customers are angry about being charged for the extra levels. I can understand their frustration to a degree. Despite what one might think is “value” for a game that was US$3.99, relatively to its environment it was too short for the investment. The promise of new levels allowed many fans to shelve their disappointment and clearly this expansion was viewed as “completing the job” rather than “extra content” by such parties.

Monument Valley is an excellent game totally worth the investment and while frustrating, I’d argue it is a fair price for the quality. However, the studio perhaps would have been better served adding the update for free, but changing the price of the game to US$4.99 or US$5.99 so that existing fans that helped build the studio’s name were rewarded, and newcomers were billed for the extra levels.

Will there be another expansion? It seems unlikely at this point given ustwo’s “stuff the lot of you we’re going F2P” response to the one-star reviews. But the situation does provide another useful insight into the importance of “perceived value,” even when one is talking cents more than dollars.