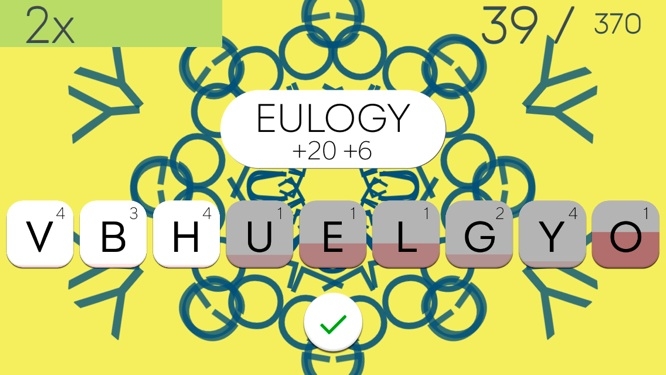 Note: Lex scored a place in our Top 50 Best iOS Games of 2014 So Far - a useful resource well worth checking out.

I have come up for air after burning through forty minutes of Lex. My eyes are still adjusting to the tame colours of the real world, my ears are relieved that the tension inducing music is gone, and the section of my brain responsible for vocabulary is crying in a corner about its inability to spell any word with a ‘u’ in it.

A word puzzle game born for touchscreens, Lex was developed by Simple Machine, a small team from New York City that has a growing repertoire of simple, well made puzzle games including Circadia and Digits.

Presented with nine lettered tiles, the player must make words of three characters or more to rack up a high score. Some letters are worth more points than others, and the more points that a letter is worth the longer it will stay in play. Fail to use a letter before it times out and it’s game over.

The pressure created by that time limit is what makes Lex bubble. The sound and art design pile it on in such a way that it’s almost impossible not to panic when the tiles fill up with red. They begin to shake, the music keeps on chiming, the colours swirl and suddenly you can’t comprehend that the simplicity of “soy” will save a run dominated by more complex words.

Three letter words are often saviours in Lex, and unleashing a repertoire of short, vowel heavy words will help your survival rate. The AEIOUs pile up rapidly, and along with a dose of common consonants there are plenty of chances to lose your cool.

Bashing out words isn’t always the best strategy though, as every word submitted speeds up those timers and cranks up the tension. Netting a new high score is incredibly satisfying, but oddly you can only share your highest scoring word over your social networks, not your overall score.

The game’s dictionary is pretty comprehensive, with the usual omissions of proper nouns and swear words. There are a few words that fall foul of whatever dictionary Lex is using, but they are few and far between.

As tight as the game design is there is only one way to play, and after spending a week with Lex on my mobile I’m finding that my play sessions are getting shorter. Given the physical limitation of simply not being able to type any faster there is only so far a high score can go, and that’s the biggest motivation that there is to play.

Lex is still a wonderful mobile game, with sound and art design tailored perfectly to the gameplay. There’s no need to have a dictionary for a brain to succeed and it is incredibly easy to just keep on playing. Your game can be a thirty second failure or a three minute display of genius, but no matter the speed of your fingers and the reflexes of your brain, your eyes will be glued to the screen.