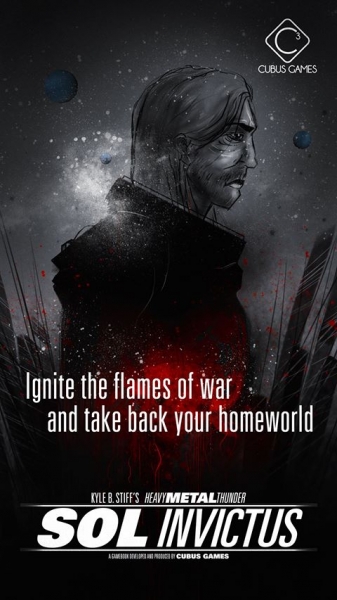 Cubus Games has been on a roll. First they adapted Kyle B. Stiff’s gamebook, Heavy Metal Thunder, for mobile devices (which we played and loved, by the way). Then we got chatting and Cubus Games informed us that it would soon be releasing another gamebook adaptation. That title turned out to be British gamebook author Dave Morris’ Necklace of Skulls, which featured a vastly different colour palette to its previous titles, and other additions, such as multiple playable characters – it too has been raking in great reviews. Now the company, which clearly doesn’t sleep, has announced the follow up to September’s Heavy Metal Thunder, Sol Invictus.

Not much is known about Sol Invictus yet, except that it will continue on from the events of HMT, following our forgetful space marine after the epic conclusion of that title. This is great news for fans because, as we pointed out in our review, Heavy Metal Thunder leaves a handful of loose ends and genuinely intriguing clues to possible plot devices for the sequel.

HMT had very few issues, and my only gripe being that there wasn’t more of Marc Gonzales’ dark and twisted artwork to compliment the huge blocks of text, so fingers crossed we get to see more of that in the sequel. No doubt Sol Invictus will be out before you know it. But if you haven’t already, be sure to check out Heavy Metal Thunder on the app store in preparation for this exciting follow-up.


Also, if you are into your gamebooks, I highly recommended checking out our feature interview with the founder of Tin Man Games, Neil Rennison - the godfather of digital gamebooks - about the art and craft of bringing back this genre - it is available in Episode 6 of Grab It.