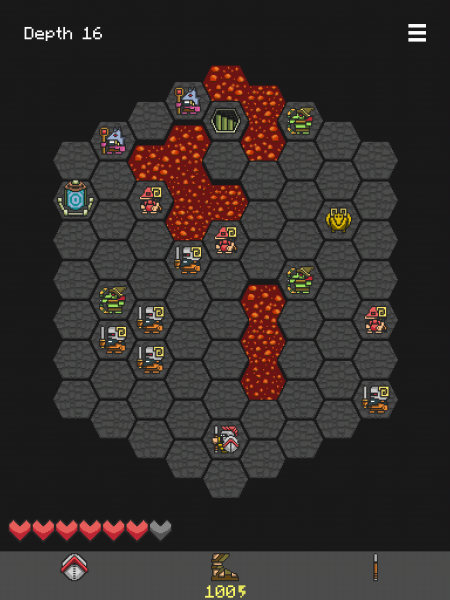 Red Hot Chili Peppers front man Anthony Kiedis certainly wasn’t referring to Hoplite when he belted out the lyrics “I like pleasure spiked with pain” in the song Aeroplane, but like the many substances he found himself hooked on, Hoplite is an addictive experience where pleasure hides the pain.

Hoplite presents a deceptively simple premise. Taking charge of a proud little Greek hoplite, your quest is to clear dungeon after dungeon in search of the mysterious Golden Fleece. In traditional roguelike style, your gallivanting Greek moves across a tile-based board to battle demonic enemies not particularly keen to part with their Golden Fleece. Hoplite captures the look and feel of old-school roguelikes, with a clean and simple interface and appropriate sprite-based graphics.

Despite its relatively simple appearance, I approached Hoplite cautiously, knowing full well the brutal depths of the roguelike genre. After clearing the first few dungeons with little difficulty, my confidence was rising as was my disdain for this so called ‘roguelike’ title. A few dungeons later, I experienced my first death at the arrow of a demonic archer. I laughed it off, putting it down to a careless mistake.

Approximately 60 deaths later I considered myself humbled. Fans of roguelikes will take perverse pleasure in the extreme difficulty on offer in Hoplite. This is the closest I’ve come to throwing my iPad across the room in frustration. Even after racking up scores of deaths, I felt no closer to retrieving that damn Golden Fleece.

Here lies both the pleasure and pain of Hoplite. As a roguelike, it's a difficult game. And rightly so. The complex management and tactical prowess required to come anywhere near close to finishing a roguelike game should require a herculean effort. But Hoplite tends to err towards the old-school style of difficulty, where trial-and-error trumps genuine strategy. It was only when I accidently stumbled upon a particular strategy that I had a lightbulb moment – the very next playthrough I finished the game. Hardcore roguelike fans may argue this is exactly what a traditional roguelike should offer. I’m not convinced. Trial-and-error rarely satisfies.

But despite countless deaths and incredible frustration, I never felt compelled to put the game down. The brutal difficulty is tempered with a sense of accessibility that comes from short, intense levels. Even after dying multiple times, it doesn’t take long to get back to where you bit the dust. Well that, and being as stubborn as I am - I was determined not to let the game get the best of me.

Even though that may sound facetious, this sense of stubbornness actually comes from what may be the most compelling reason to give Hoplite a go. Like many roguelikes, Hoplite offers an incredibly deep sense of satisfaction that only comes from completing a game that almost crushed your spirit. The difficulty may waver between compelling and downright frustrating, but there is a cunning addictiveness to Hoplite that will have you coming back for more.

Verdict: Hoplite proudly flies its roguelike colours. Permadeath, turn-based combat and punishing difficulty await those game enough to plunder the dungeons’ depths in search of the Golden Fleece. The punishing, and often frustrating, difficulty of Hoplite is balanced by short, quick levels and an addictiveness that only comes from a desire to not let the game get the best of you. 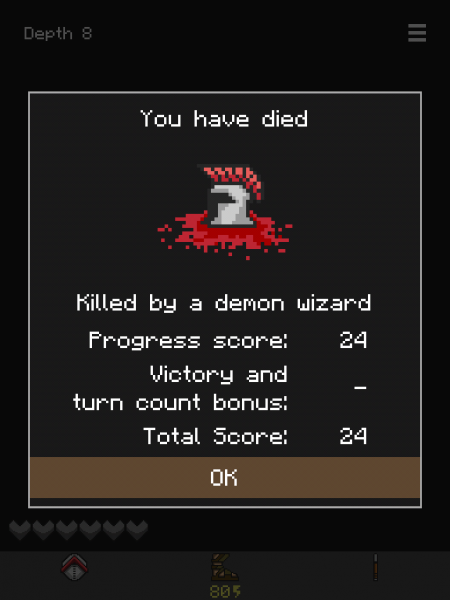