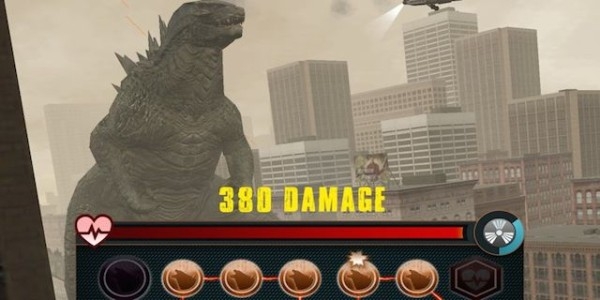 Update. Godzilla has once again been unleashed upon our world with an intention to cause massive chaos! Make sure you go check out the new movie and then, while you're still in a destructive frame of mind, pick up Godzilla - Smash3 from Pipeworks Software and Rogue Play. Even better, it's free so make sure you grab the game here. Let us know what you thought about the movie and the game through our social media channels.

Original Story. It was only a few days ago we revealed that the king lizard himself, Godzilla, will be smashing his way onto iOS devices alongside the upcoming movie reboot, on May 16. It pretty much goes without saying that being able to play as Godzilla is every kid's dream, right? I'm sure that it wasn't just me as I was growing up.

In anticipation of the game's upcoming release we manged to catch up with Growth & User Acquisition Lead at Rogue Play, Nate Adams, to find out more of what we can expect.

The team has quite a history in developing Godzilla games across multiple platforms. Is it fair to say you guys are massive Godzilla buffs? Do you have any favourite Godzilla movies or games?
The team here at Rogue Play has always been huge fans of Godzilla, and we’re just as excited for the new movie as anyone. We love all the older films too, and many of us have played Godzilla games going all the way back to the Super Nintendo. Some of our favorite games were those made by Pipeworks Software, our development partner for Godzilla – Smash3, including Godzilla: Destroy All Monsters Melee or Godzilla Unleashed. We’re channeling that same sense of destruction into a pick-up-and-play experience for mobile that we think even more people can enjoy. Pipeworks’ expertise in Godzilla games shines through strongly, and we think our fandom does too. We want this game to be a winner with Godzilla fans.

From what we’ve seen so far, Godzilla – Smash3 seems to blend together a number of genres, incorporating action, puzzle and RPG elements. Considering the source material, do you believe players will connect with this hybrid mash-up? Why not just a straight out action title?
Our biggest goal with Godzilla – Smash3 was to put the destructive force of Godzilla into players’ hands in a way that felt great on mobile devices. To accomplish that, and please a really diverse fanbase for Godzilla, we’re marrying together a few different game mechanics.

The puzzle mechanics give players a precise and predictable way to control Godzilla, one that’s intuitive on touch devices but offers enough tactical depth to keep gameplay fresh after many hours. It also gives players a better chance to revel in seeing Godzilla’s actions on screen, which we’ve made as close to the film as possible.

The depth and decision-making of this system is a natural fit for RPG-style mechanics, so players will be able to grow in power and upgrade Godzilla to match a particular playstyle. We can’t wait to see how players choose to approach some of the tougher challenges in the game.

On that note, allowing players to live out their dreams of taking control of Godzilla and smashing everything into oblivion seems like a home run. What sort of mayhem can you get up to as Godzilla?
You’re exactly right that we want players to live out those dreams. We hope our players feel empowered when they pick up the game, and we worked closely with Warner Bros. and Legendary Pictures to make sure we’re on the mark with that sense of authentic Godzilla destruction.

To match the big challenges Godzilla is facing in this new movie, we’re giving players a big variety of obstacles to conquer. They’ll face challenges across land, sea and air, along with some larger threats we don’t want to spoil. We’re also bringing players to different cities across the globe, with different gameplay elements and objectives across 80 levels.

Did you have room for flexibility in the story you wanted to tell in Godzilla – Smash3, or did you have to stick closely to the plot of the movie?
Godzilla – Smash3 puts the major themes and locations of the film into players hands, and we’re looking forward how players tell their own stories within the game. Warner Bros. and Legendary were directly involved with Godzilla - Smash3 from day one, helping us to match the look and feel of the movie. We had special access to the script, and we’re happy to say many of the sights and sounds in the game are adapted directly from the film. We hope it will be a crowd-pleaser for fans of the movie.

Given that Godzilla – Smash3 will be launching for free, will players be able to experience the game in its entirety without paying a dime? Or will there be scope for purchasing in-game items?
As with all our games, we set out with a clear vision that even if players prefer not to pay, they will be able to experience everything the game has to offer. Players can choose to purchase special boosts and other bonuses to change up gameplay or gain an edge, but they’ll never be required to. No content forces players to play, and the game is built first and foremost with the player’s experience in mind.

Finally, what did you enjoy the most about developing a brand new Godzilla title for mobile devices?
The most exciting thing for us is having people pick the game and immediately feel like they’re an unstoppable force, that they’re in control of such a great character as Godzilla – whether they’re a core gamer or just casual fan. We can’t wait to have the game out in the wild and in front of more people. Of course, it’s also been great to get a look at the new movie.

Be sure to mark your calendars - May 16 is when the king of the monsters will once again wreak havoc across our world. Except this time, we'll be the ones gleefully causing the destruction.