This vault-inspired base-building sim is a great distraction, but is it worth your bottle caps? 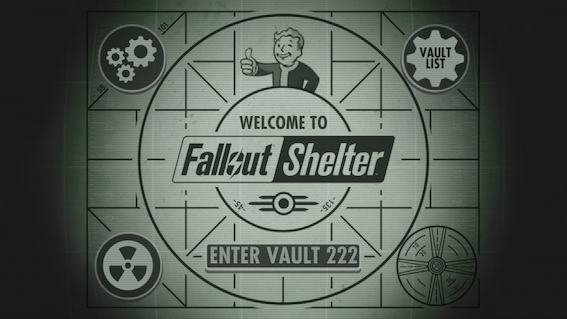 Behind Sony’s mind-bending conference (...that FF7 announcement), Bethesda had one of the most spectacular showings at E3. We got a closer look at Fallout 4, discovered Dishonoured 2 and were introduced to a curious little base-building sim known as Fallout: Shelter. Now, I’m not normally one to delve into an F2P game so readily, but Shelter had three major draw cards: i) it was free, ii) it was available immediately and iii) it was Fallout (something). Honestly, it’s been so long I’d play Angry Birds: Fallout if it was put in front of me. But that’s neither here nor there, the important question remains: Is Fallout: Shelter any good? That question is actually harder to answer than you might think, but I suppose it comes down to two things, how much cash you’re willing to fork out and how proficient you are at micromanaging.

Fallout: Shelter casts you as the benevolent/ambivalent/malevolent overseer of wasteland vault. You start out with one survivor knocking at your vault door, then a few more, and slowly the surviving stragglers begin to thin out while you get to work constructing a habitable living space for your new residents. From the get-go, Fallout: Shelter hides no resemblance to its mobile forefathers, like Tiny Tower.

To begin with, things are off to a cracking start. My small rag-tag group of survivors are cheerful, love their work and some of them have made short work of bonking like rabbits. We build a water treatment plant to keep radiation poisoning at bay, a diner, some living quarters and a power generator to keep it all running. As the attentive overseer, I’m rewarded for just about every action I make with “lunch boxes” (Fallout: Shelter’s booster packs). Opening these lunch boxes is both exciting and fruitful. I earn unique followers (like a luchador warrior, who quickly becomes my most valuable resident), acquire a few weapons, and earn a hefty share of caps. After hitting the jackpot a few times, I experience my first siege from the raiders. My workforce comes to an abrupt halt as the four scoundrels run about my vault, causing general distress for the people living there. In swoops my new best pal, Sir Luchador, and efficiently disposes of the raiders one-by-one and before I know it, it’s back to business as usual.

Yep, life in Vault 222 is just peachy. “I’m so glad to have found the Vault” they say, “Our overseer is so generous” they say. Before long, though, it’s the incessant bonking that is my undoing, as baby after baby arrives, so does another mouth to feed and before the sun sets on my first day as overseer, the cracks start to show.

Fallout: Shelter slowly weans you off the luxuries of free booster packs and the constant stream of arrivals. Though it’s not marked in anyway, you can feel the exact moment Bethesda decides to cancel your free ride and push you towards making purchases. After this point, filling my energy quota became an uphill battle. At the start it was simple, I created a power generator, I received electricity. I built a diner, my people were fed. But, nothing seems to work as it should any more. My electricity bar was constantly filled, while food and water withered. So, I scrapped one of my power generators and dedicated the majority of my resources to water but still, the water meter won’t budge and my underlings quickly succumb to radiation poisoning and, ultimately, some hardcore depression. Overnight, nearly every one of my minions (asides from the children and one oddly cheerful chap, pictured) go from being happy-go-lucky Oompa Loompa's of Vault 222 to a mopey bunch of characters who wouldn’t be out of place in a Darren Aronofsky film. 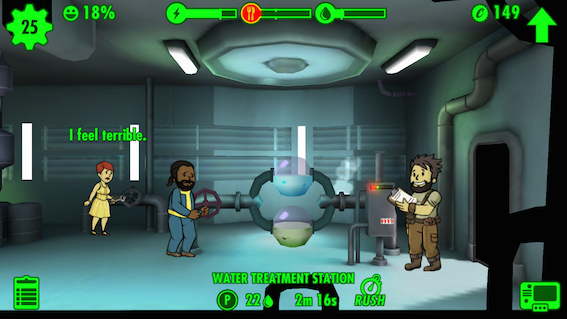 Into my second day, I remember that you have the option to send Dwellers out into the wastelands. By dragging your dweller from the vault and placing them outside, you send them on a recon mission. They collect caps, XP, weapons, armour and sometimes other dwellers– their journey is all documented in a journal, which makes for an entertaining read. With newfound hope, I make a last ditch effort to bolster some kind of morale. I equip a few dwellers with some power armour, some laser pistols and send them exploring in the wastelands– they were never seen again.

Things were grim. At first I blamed the game for trying to force my hand to my wallet– and maybe that is somewhat case – but the truth of it is, I’m just a really unreliable overseer, just as I was once a terrible father to my Tamagotchi (and more recently to my VPET). These dwellers don’t just chip away, accumulating points while you’re away. They need your constant attention. You need to collect resources, train your people and ultimately nurture a better quality of life for them. Something, I simply don’t have the attention span for.

In the end, I enjoyed the game enough to warrant the purchase of a few booster packs (thankfully I managed to keep it at a few). I’m sure that if you spent enough money, your people could live like royalty in a safeguarded oasis, away from all the ghouls, raiders and rad-roaches. But, then what? It becomes a base-building sim just like any other. I’ve kind of enjoyed slumming it, living on the brink of survival – it’s in the Fallout spirit!

Fallout: Shelter isn’t a great game, it may not even be a good game, but it’s certainly an F2P game that's on the right track. Ultimately, it pleased this Fallout fan and I’ll happily check up on my bitter and resentful dependants from time to time.

If you’ve got a heart and actually want to do what’s best for your colony of dwellers, check out our top tips for survival in Fallout: Shelter.

Update: The Android version has just been given an August 13 release date.