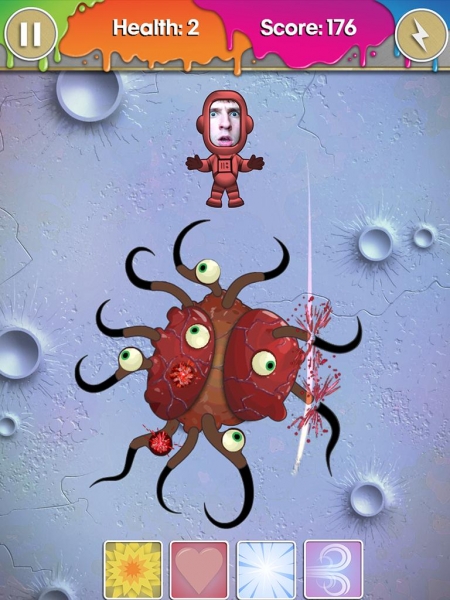 Face Invaders is a top-down arcade game by indie Australian developer, Electric Mammoth. With a quick selfie before the action begins, YOU are literally cast as the hapless hero defending yourself from waves of alien aggressors. It’s not quite as elegant a system as EA Sports' face modelling software, but pulling a silly face and watching it stare back as you as you fight for survival is part of the playful attitude the Mammoths capture with Face Invaders.

Face Invaders plays with a slightly different spin on the familiar tap and slash mechanic made popular on iOS by Fruit Ninja. There are ten different classes of insectoid enemies in Face Invaders, and each one requires a different combination of gestures to vanquish. Memorising these techniques is the most enjoyable part of the game. It amplifies the already frenetic gameplay, and when you fail, it's usually because of your poorly manipulated digits, knowledge that drives you to give it another go. That said, there are often huge spikes in difficulty and I found myself overwhelmed rather quickly a little too often.

This is somewhat balanced by power-ups that are purchased with achievable in-game currency, which can better prepare your for coming difficulty spikes. I did find myself forgetting to purchase these, however. Face Invaders is one of those games where you want to restart it immediately after defeat, and without a handy reminder to let you know you've accrued enough points to spend between sessions, a few times I charged straight on into inevitable death. There is also a small handful of bugs, such as kill streaks resetting randomly, that make some achievements painful to attain. These aren't game breaking, nor do they detract from the fun, but like the villainous Splurgons they must be squashed before we can experience this game in its entirety.

Electric Mammoth aren't trying to change the world with this addictive tap ‘n’ swipe arcade fix, but it's clear - even from just watching the launch trailer below - that a lot of fun was had making this game. It's totally worth a play for a $1, and kids in particular will undoubtedly get a giggle out of the gloriously shameless humour.

Note: There are two Face Invaders games on the App Store. Electric Mammoth's latest release is the only one with Grab It's tick of approval.