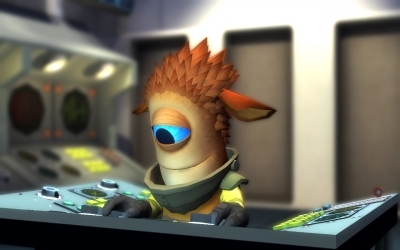 From the opening seconds of the below teaser video for Steel Wool Games' debut title, Flyhunter Origins, you can see the Pixar influence. A studio formed from ex-staffers of the famed animation powerhouse, its first foray onto the App Store is set to come in the form of a quirky and cute 2D platformer that recalls in equal parts Monsters Inc. and the iconic Rayman. Here's a note from the developer about the story:

"Let’s set the scene…  Zak is a bumbling alien spaceship Janitor and wannabe Flyhunter from Burgarol 3. He works on board the Flyhunter Crew’s legendary spaceship The Frog, but deep down he longs for an exciting adventure of his own. Somewhere in Earth’s orbit, while the heroic Flyhunters are deep in cryo sleep; The Frog’s cargo of super-important exotic insects from the latest hunt is mysteriously jettisoned into Space, crash-landing back on planet Earth! It seems that clumsy Janitor Zak is the only one around to save the day. Can this accidental hero swap his sweeping brush for a super-cool fly swatter and take on the role of daring Flyhunter? It’s a good job Zak’s used to cleaning up – because he’s in a huge mess! Hurry! Help this little dude complete his mission, before “The Investors” find out their expensive bugs are missing!

As you'd expect give the studio's history, the story will be cutscene driven, sure to give it more depth than your traditional iOS indie game. The gameplay appears to mix it up, too, with 2D platforming and 3D endless-running on the cards. The game is due out in Q3.

In the interim, if you're after some killer platforming, check out Last Inua. We feature a world exclusive making of for this delightful game in Episode 4 of Grab It, which anyone interested in discovering the best new iPad game should also check out.