Follow us down into this nightmare well as we move past the broad brushstrokes and look at this challenging treat from Moppin in more detail. 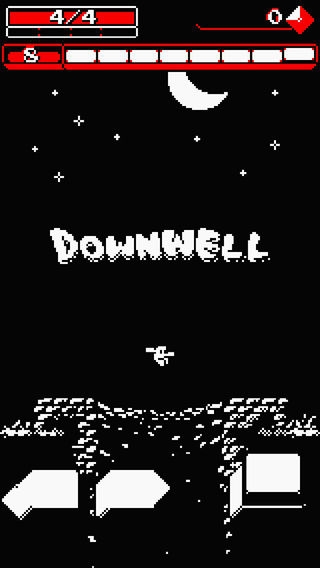 Players will think they have Downwell's measure after their first handful of descents; the mechanics of running, jumping and dropping platform after platform through a pixel art aesthetic, all while blasting foes and gathering collectibles, is an easy grouping of descriptors to rattle off.

Persist past your first dozen or so quick deaths, however, and Downwell starts to reveal itself as a stellar example of tight controls, finely tuned difficulty and subtly balanced gameplay. Layers of playability welcome both those choosing to mash and blast with prayers and luck, and those who prefer to learn a game as they would a skill, acquiring a certain level of satisfying mastery. It's a commendable feat when a developer can offer both ends of that spectrum within the one experience - well done Moppin!

The ingredients, by themselves, are straight forward: Gravity means a one way ticket in Downwell, although you can slow your descent by firing your gunboots, and stop altogether for much needed time-outs on platforms or destructible blocks.

A simple control scheme involving left and right buttons - with one more that both shoots and jumps - strips away unnecessary complexity, which is a good thing as you'll have enough to think about once surrounded by varied foes. Killing said foes is achieved by landing on or shooting them. Straight forward and simple.

After a few runs though you'll start to notice a myriad of small things that combine together to create those previously mentioned layers. Landing on an enemy does more damage, yet it's trickier, making blasting away with your gunboots a tempting choice if it weren't for a limited ammo clip that regularly leaves you unarmed. Adding to this choice of bopping or blasting foes, is the fact that your clip fills instantly on landing on a platform or an enemy. Red enemies can only be blasted, turtles can only be bopped, and with white ones it's the player's choice.

Bopping from one enemy to another without landing on the safety of a platform reveals a clever combo system that rewards bravery with extra bullets and gems. The higher your combo string, the greater the reward.

Can you start to see how all of the above ingredients synergise to offer up different gameplay styles? All those mechanics come together with smaller yet equally important details; the momentum of your avatar and different speeds and attack patterns of enemies all feel like they have been tuned to perfection, the end result being a package which you just eventually “get” after a certain learning curve unique to you.

Gems collected within each run can be spent in shops that are presented as a knowing wink to gaming's past. Health, extra bullets, lives, jet packs and more are all on sale in these safe havens, and while there, make sure you take a few seconds to breathe and ready yourself before venturing back out into the madness.

There is also a metagame that acts as a carrot beyond that of simply getting better. Accruing points allows you to level-up between games in order to unlock different "styles." One, for example, has a limited levitation attribute that can be used between replenishing ammo clips. Another simply gives more health.

There are more details to Downwell that flesh out an already attractive package; exiting the safety of a gem-rich cave or shop presents a safe zone that freezes enemies, giving players a fighting chance before battling on, while different colour palettes such as “gboy” or even “vboy” can be unlocked by levelling-up.

If playing on iOS, Downwell is a great option to to fit into your pocket on your iPhone, however playing on iPad moves the control buttons out of the play field and off to the side, making for a much preferred experience. PC gamers are also catered for via Steam.

Downwell is a gamer’s game in that it at once feels both familiar and fresh. The knowing nods and winks thankfully just complement a nuanced and worthwhile package, rather than trying to be the main attraction. This won’t be going into a folder on my iPad for quite some time - the quicker I can access this little gem after my fingerprint is read and verified, the better.