1. Guybrush’s first name came about from the game’s artists, who was using a program called Deluxe Paint. This program saved files as “brush” files. When designing the main character, who was still unnamed, the file was saved as “guy.brush” and a hero was born.

3. In Escape From Monkey Island, Guybrush discovers that Ozzie Mandrill has acquired and renamed the Scumm Bar on Melee Island to the Lua Bar. This is a reference to the change in the programming language used by the developers, from SCUMM to Lua.

4. Murray, the talking skull, was intended to only have a limited role in The Curse of Monkey Island (the first chapter only). But he proved so popular with test players that he was given a more significant, and recurring, place in Monkey Island lore.

5. The inspiration for Murray apparently came from a talking skull that designer Bill Tiller bought at Disney World while on vacation.

6. In The Curse of Monkey Island, if the player takes the time to examine the crumbling hole in the Goodsoup Family Crypt, Guybrush will squeeze through it and poke his head up into the Melee Island forest.

7. Largo LaGrande, from Monkey Island II: LeChuck’s Revenge, was named after the town that Ron Gilbert grew up in – La Grande, Oregon.

8. In Tales of Monkey Island, Club 41 was named after the 40MB file size limitation of the Wii. The developers initially wanted to include an additional puzzle in the game but couldn’t fit it in, making reference to the 41stmb that was unable to be included.

9. In The Secret of Monkey Island, if Guybrush stays underwater for more than 10 minutes he will drown; a reference to his claim that he can hold his breath for 10 whole minutes.

10. In The Curse of Monkey Island, if Guybrush “picks up” the seawater at Blood Island Beach 26 times, he will walk into the water and appear under the pier in The Secret of Monkey Island, where he will find his own drowned corpse. 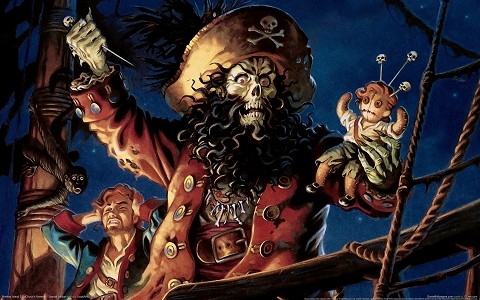 11. The man in the troll suit that prevents Guybrush from crossing the bridge in The Secret of Monkey Island is revealed to be George Lucas.

12. In The Secret of Monkey Island, Guybrush can examine a stump in the forest. Upon doing so, the game prompts the player to insert a number of fictitious discs. The LucasArts help desk received so many calls regarding these “missing discs," that the joke was subsequently removed from future releases of the game.

14. The word Revenge in the title “Monkey Island 2: LeChuck’s Revenge” is likely a reference to an early name for Star Wars Episode VI, which was branded Revenge of The Jedi, rather than Return of the Jedi.

15. The insults for the sword fighting sequences in The Secret of Monkey Island were conceived by Orson Scott Card, author of the Ender’s Game series. He apparently received help from his kids in coming up with some of the more lame insults.

16. When Guybrush is stuck in the quicksand during The Curse of Monkey Island, there is a sign nearby with facts about a “Pappapishu Bush,” with pappapishu being a fictional native word meaning “ouch.” If the player read this sign, in all future instances where Guybrush is supposed to say ouch, he will instead say pappapishu.

17. If you type the word “skull” anytime during Escape From Monkey Island, Murray will appear on the screen laughing.

18. Ron Gilbert has said that he never intended for Guybrush and Elaine to end up together.

19. There is a secret code in The Secret of Monkey Island that allows the player to instantly win the game. If the player presses CTRL+SHIFT+W, they will be prompted with the message “Are you sure you want to win?” By selecting yes, the game will immediately end. You’re going to go and try that out now, aren’t you?

20. The Monkey Island games are crammed to the brim with pop culture references and LucasArts in-jokes. If you look closely enough, you’ll find references to franchises like The Terminator, Star Wars, Indiana Jones and Monty Python, in addition to references to other LucasArts games like The Dig, Loom and Grim Fandango (which just came out on iOS by the way). 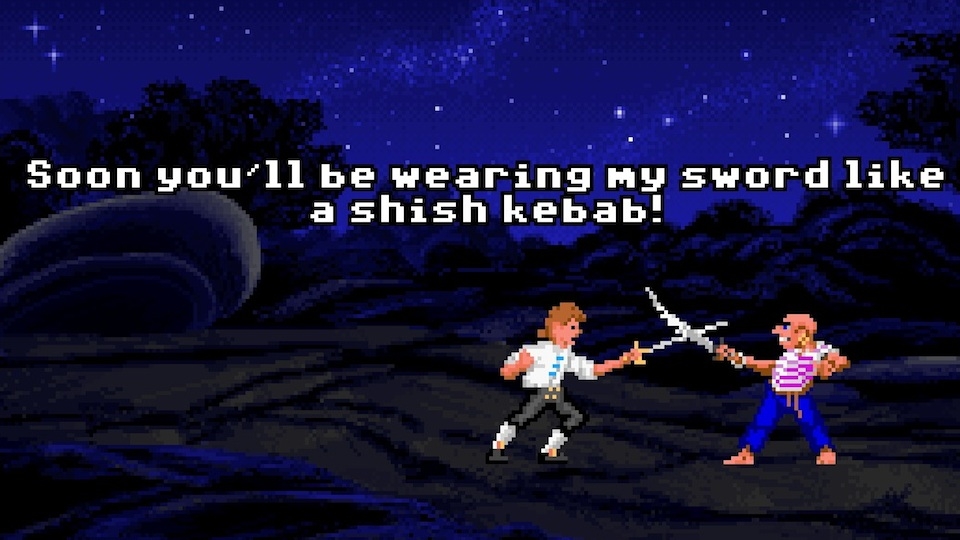 22. The “real” secret of Monkey Island has never been revealed. Series creator Ron Gilbert intended to reveal the secret at the end of the third instalment, but left the company after LeChuck’s Revenge.

24. At the end of The Curse of Monkey Island, a song duet called “Plank of Love” between Guybrush and Elaine had been written to play over the credits. However, the production team ran out of time to record the song.

26. As a special bit of bonus trivia, Gilbert has stated that if he could make Monkey Island 3a, it would have the following features:

- An enhanced low-res retro art style
- Be a hardcore adventure with no tutorials, no hints and no “pansy-assed” puzzles
- A full on inventory
- Released in boxed physical form
- Dialogue puzzles
- Full voice acting
- He would rebuild the SCUMM programming language just for the game
- Be made by a team of less than 10 people
- It would not be the Monkey Island 3 that Gilbert envisaged some two decades ago
- The press won’t get advanced copies

Gilbert makes one final point about what Monkey Island 3a would be, which is worthy of its own emphasis. Here it is:

“The game would be the game I wanted to make. I don't want the pressure of trying to make the game you want me to make. I would vanish for long periods of time. I would not constantly keep you up-to-date or be feeding the hype-machine. I'd show stuff that excited me or amused me. If you let me do those things, you will love the game. That, I promise.”

Well, we hope you've learned something new about Monkey Island or, at the very least, reminisced about some of the series' finest moments. Let us know in the comments below if you have some more trivia that isn't on the list.