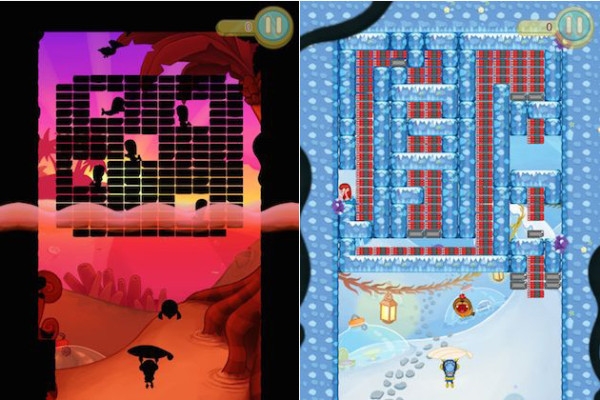 The brick-breaker game genre is best imagined as a single player pong with occasionally fancy backgrounds. I get the core concept, but generally, after a few mind-numbing minutes of brick destruction and the inevitable tedium of watching a ball bounce in geometric patterns around the final brick, evil thoughts enter my mind. Like the worst and most despondent thoughts a gamer could possibly have, like, “what am I doing with my life?” So I give Sky Tyrannosaur extra credit for its brick-breaker title Blowfish Meets Meteor because, not only did I avoid such existential crisis while playing it, but the charming gameplay and puzzle design is truly impressive.

So why all the brick breaking? What’s the story? Well, the game opens with a well-animated sequence of a meteor on a doomed path to Earth. Instead of striking land, it strikes sea and causes disaster in the underwater realm. Through this chaos, blocks and piranhas have (conveniently) trapped mermaids in two-dimensional prisons and it’s your duty to free the beautiful hybrid fish-ladies with some tasty pong-tennis skills. Beware though; saving all the mermaids requires traversing through six different worlds, each with a ferocious (sometimes infuriating) boss waiting on the final level.

This simple premise is surprisingly fun. Initial levels are basic and provide a good tutorial to get you set for when the difficulty truly amps up. Destroying a number of bricks in quick succession will net you some TNT, which can conveniently blast wherever you point your finger at, and other fish will occasionally turn up with power-ups that alter your sea-shell paddle into a sticky treasure chest or a shield for protection – both with unique tactical utility.

Each level has a particular secondary objective (in addition to the primary of saving fish-biddies) such as “don’t take any damage,” which will net you more points when your performance is scored. These points are converted into gemstones to be used in the aptly titled Gemstone Cavern where they pour out of a tap and gradually destroy a nasty vine protecting a secret. Unfortunately, I did not uncover said secret, but the presence of it provided inspiration to go for maximum points each level.

I love the character design and level animation – they are charming and visually quirky. The silhouette levels at sunset were particularly pretty. Also the music and sound effects are great, especially during boss battles. However, considering all the positives going for Blowfish Meets Meteor, I also had a couple concerns.

Firstly, the controls felt a bit off. Occasionally the character would lag behind my finger movements, resulting in immense frustration on harder boss battles – also the sweet spot for control (I played on an iPad 2) seemed to be where my big fingers would block the view of my character. Secondly, some of the boss battles were just plain annoying. For example, the electric eel boss has an unavoidable attack unless you acquire the unpredictable shield power-up. I thought that some explanation could be beneficial to the player in these circumstances (especially considering that was only the second boss).

Yet I remain super impressed with Blowfish Meets Meteor. The instantly likeable visuals and unique presentation are evidence of a game given lots of love. Furthermore, there is a true sense of satisfaction at beating some of the trickier levels and bosses. The game is reasonably priced at $2.99, and there are no IAPs. Blowfish Meets Meteor is a solid brick breaker and has quite honestly made me rethink my attitudes towards some of the more generic video game genres – and it also has very fancy backgrounds.