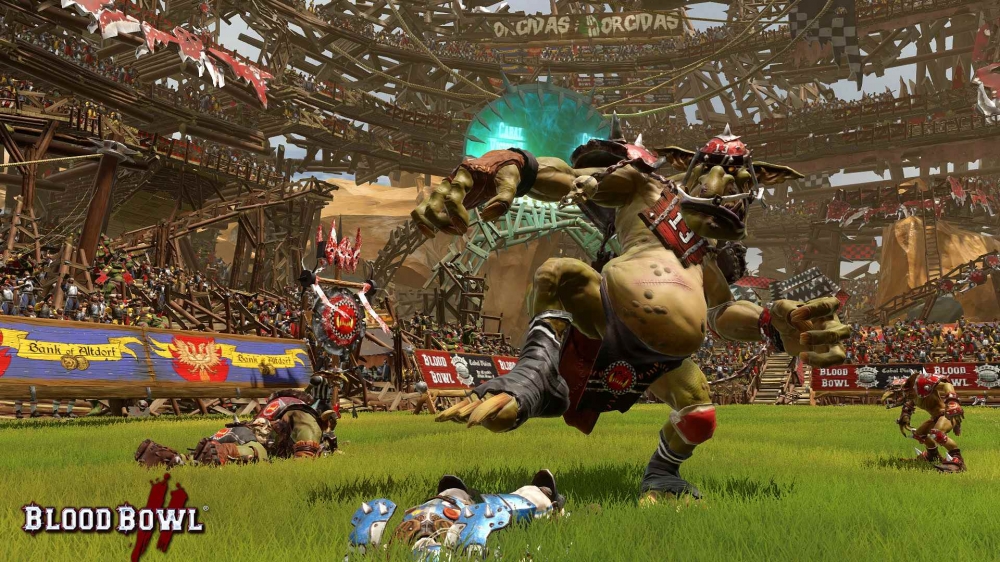 The game itself is a parody of American Football, where each team takes turns to kick off and needs to run the ball into the other player's end zone to score a touchdown. However, in Blood Bowl, the rules are much more lax, and can be broken often throughout a match. Orc teams can have their ogre player throw smaller goblin players across the field, Chaos teams can field minotaurs, Dwarven players can ride into battle on a giant steam roller. All of these options make the game dangerous, and players are frequently injured, and occasionally die horribly mid-match. It makes each match astonishingly unpredictable, and you may not recognise your team by the time the siren blows.

Game On
The gameplay is well presented; each player takes turns to position their characters across the grid. They can move the ball, make passes, hit opponents and so on. Any interaction between characters is then measured by dice and statistics. If you want to run a character past an opponent through their blocking zone, you need to roll a dice. The chance of each successful roll is shown on screen, so you always know if you have a 60% chance to make a pass or a 12% chance to make it past that Ogre.

I am glad that these chances are all laid out on screen, but I did find the disparity between percentage chances and dice rolls a little disconcerting. You don't see the dice roll happen, you just see the percentage, hear it roll and see if you succeed or fail. I feel like this could have been a bit more clear by making it all dice or all percentage instead of the mix.

Get The Original Blood Bowl on iOS

Characters are wonderfully detailed as you'd home from a title with tabletop origins, and unique bits of armour, hairstyles, tattoos and abilities all help to make them stand out on the field. Animations are great, and the slow-mo camera showcases heavy hits well. Big players hit with a lot of weight, and smaller characters dance out of the way of lumbering strikes. The audio is functional, but could probably be traded for any other sports game; making a crowd sound unique isn't easy. The best part of the sound is the two commentators, Jim and Bob, a vampire and an ogre who speak over the whole match and generally mock both teams.

These two are very satirical and, I think, quite funny. I understand that bad puns and references aren't for everyone, but the commentators telling a frozen player to “let it go,” or talking about social media networks FaceTome and Twerper is funny to me.

This Season's Highlights
Comparative to 2009's Blood Bowl, not a lot has changed in the moment-to-moment gameplay. The rules are mostly the same, but the experience has been tightened up. Following the development and release of Blood Bowl 2 I heard that the focus this time around was on making a fun video game, rather than a faithful recreation of the tabletop. Die-hard fans might not like the departure, but I feel like Blood Bowl 2 is a lot easier to understand than the original, and I would happily pull it out to play with friends and be confident that they would understand it. 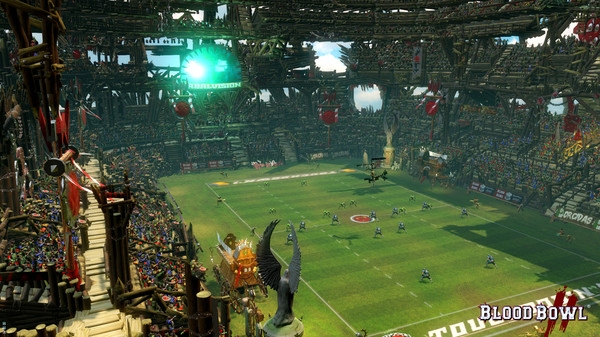 I found after playing for a while that Blood Bowl 2 showed me which team I should be playing. I went into it thinking that I would play the Dwarves - sturdy and powerful - creating an unstoppable line and marching up the pitch throwing enemy players aside. But I found that they weren't as good with the ball and couldn't move as far as I wanted. I ended up playing as the Orcs; they are just as powerful, but have a bit more variety to their unit choice and I felt that I could change tactics a bit mid-match. Orcs and Humans are very well rounded and allow for a number of gameplay options, but some of the other teams felt a bit too pigeonholed into their respective playing styles, making them a bit harder to play if that isn't your natural style.

One of the elements of Blood Bowl 2 that I loved was that teams are permanent, as are changes to those teams. You build the team that you will take into a game (or choose a pre-made one), but then what happens in the match is permanent. Player will gain experience as they would in an RPG - if a player dies, they are gone, and given enough time, they can even retire and live a happy life. Though none of mine made it that far.

Touchdown
Blood Bowl 2 was a bit of a departure for me having not delved into the tabletop nor played hours of the first game. But I found after a while that the competitive and tactical gameplay had me pretty hooked. Over the past weeks the online rooms has seen a few players available for battle, so hopefully the online community will stay strong. Blood Bowl 2 is a solid game to play with friends - bloody, underhanded and satisfying.