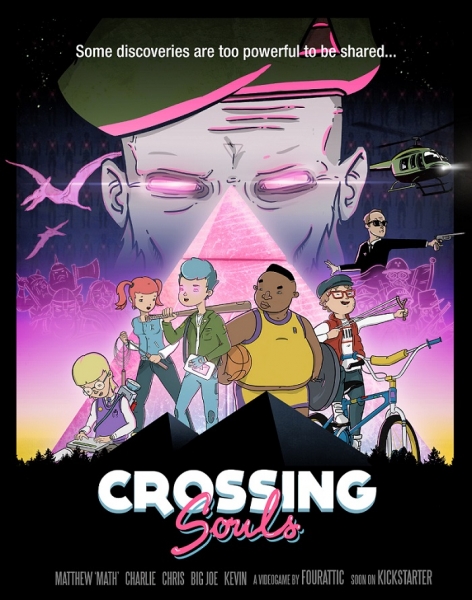 In the summer of 1986 five friends from California make a mysterious discovery in the woods outside their quite hometown. The contents of this discovery will lead them on an epic adventure across the plane between life and death and have them entangled in a government conspiracy.

What is this, you ask? Surely Spielberg's latest coming of age blockbuster? No, the answer is Crossing Souls. Developer Fourattic's upcoming title is an 80's inspired action adventure, where the player controls five kids, each with their own unique personalities, across the world of the living and the world of the dead. Players will utilise each character’s varied weapons and abilities, and a device that allows players to traverse two different realities, to solve puzzles. This puzzle-solving feature is reminiscent of Chronology and The Silent Age, where players are constantly required to alter the landscape to reveal useful hints and objects from another time.

It's no secret that moviemakers and game developers have been harvesting the 80's theme for all its worth in the past few years. I could be wrong, but I think it started with Nicholas Winding Refn's Drive when we began to see more and more of this pink and blue neon glow plastered across our televisions and gaming devices. From indie games like Hotline Miami and Majestic Nights to bigger titles like The Wolf Among Us, the aesthetic is prevalent. Some are milking it for its “cool factor,” while others are embedding its influence into every aspect of their creation.

We recently previewed Australian indie Majestic Nights for our PAX AUS edition of Grab It and spoke to Epiphany Games' Samuel Jensen about this abundance of 80's nostalgia.

"Yeah the whole "80's is so hot right now" thing is a bit of an issue, but to be perfectly honest, it just suits the other half of the setting - conspiracy theory - so damn well. There was really no other choice."

The same could be said for Crossing Souls. For a game that seems to be a blend of The Goonies and everything we hold dear about early action adventure games like Legend of Zelda and Earthbound, the Californian summer setting at the tail end of the 80's sounds like a perfect fit.

Crossing Souls has only five days and $5000 left for its $45,000 goal. Take a look at the Saturday-morning cartoon style trailer below if you're not already sold. But also make sure you head on over to the Kickstarter page to check out the synopsis, character bios and much, much more. If not yourself, do it for me. I need this game.

References:
- The Wolf Among Us
- Chronology
- The Silent Age
- Grab It Magazine Episode 8