They have iOS classics in their blood, but can the team at Prettygreat deliver another original casual gaming gem? 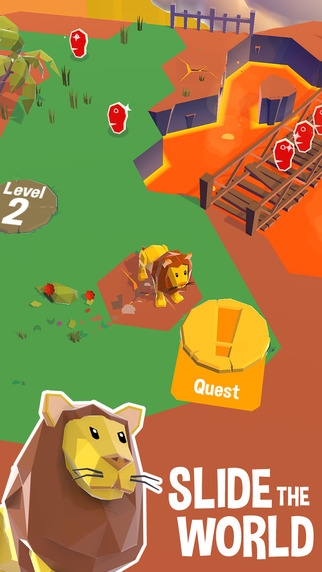 It’s hard to argue against including Jetpack Joyride and Fruit Ninja among the first big wave of games that helped propel iOS towards becoming the valid gaming platform that it is today. Playing to the strengths of the touchscreen and mixing in a healthy dose of charm and polish, these games were key in taking Australian developer Halfbrick to the lofty heights at the top of the App Store charts.

It was from this altitude that three key components of Halfbrick’s success - Luke Muscat, Phil Larsen and Hugh Walters - bailed out in a search for new challenges. Forming Prettygreat, and receiving a $500,000 parachute from fellow Australian indie success story Hipster Whale (Crossy Road), the talent and funding was in place, and the iOS gaming landscape waited for the new (if pedigreed) studio to do its thing.

Well the wait has ended and Prettygreat’s debut game has appeared in the form of Land Sliders. Was the wait worth it? Is the game a worthy sum of its considerable parts?

All the boxes ticked by the previously mentioned Jetpack Joyride and Fruit Ninja - charm, polish and making the most of touchscreen mechanics - are suitably checked by Prettygreat’s Land Sliders.

The game’s mechanical linchpin is a nice twist. While your avatar stays rooted to the centre of the screen, sliding the surrounding landscape underneath it facilitates movement. It takes a little getting used to but works well. Using this mechanic, Land Sliders becomes a game of avoidance and collection, as you explore the randomly generated levels avoiding enemies and seeking out goodies.

Charm is in abundance thanks to a multitude of cute, colourful and sometimes surprising characters (you can play as a photogenic taco!). Every aspect of the game has polish to spare - from the catchy music to the small touches such as different characters collecting items suitable to themselves rather than just coins, coins and more coins. Giraffes want carrots, RPG guy wants experience, the light bulb wants lightning… and you get the idea. It makes unlocking yet another character all the more rewarding.

This idea of collecting playable characters that affect the game’s aesthetics is not the only element shared between Land Sliders and Hipster Whale’s Crossy Road, as Prettygreat has also borrowed its benefactor’s free-to-play monetisation model. On ending a game players will often be presented with the choice of watching an ad for some free coins - and after collecting one hundred these can then be spent purchasing a new character to play with - or you can of course just go ahead and buy them with real dollars. It’s a benevolent system mercifully free from dual currencies and timers, and seems to be fair for the studio and player alike.

My one complaint with Land Sliders is that while these guys do casual gaming exceedingly well as evidenced in their past hits, this new game somehow feels a little too casual. It almost feels like a beautifully presented game mechanic rather than a full game, as I found myself wishing it had just a little more meat on its bones other than just collecting and avoiding for the sake of earning yet more characters for a slight visual effect.

Having said that, despite its simplicity, the wonderful presentation and cast of characters does keep drawing me back in, which is a big compliment, and I look forward to seeing Land Sliders evolve - it really is a lovely canvas on which to build. The studio recently teased a Halloween update on its Facebook page, so fun seasonal updates will be something to look forward to.

Prettygreat has hit the ground running with its debut effort. Land Sliders proves these guys are not about to run out of original ideas, and certainly have the talent with which to execute them. Onwards and upwards.