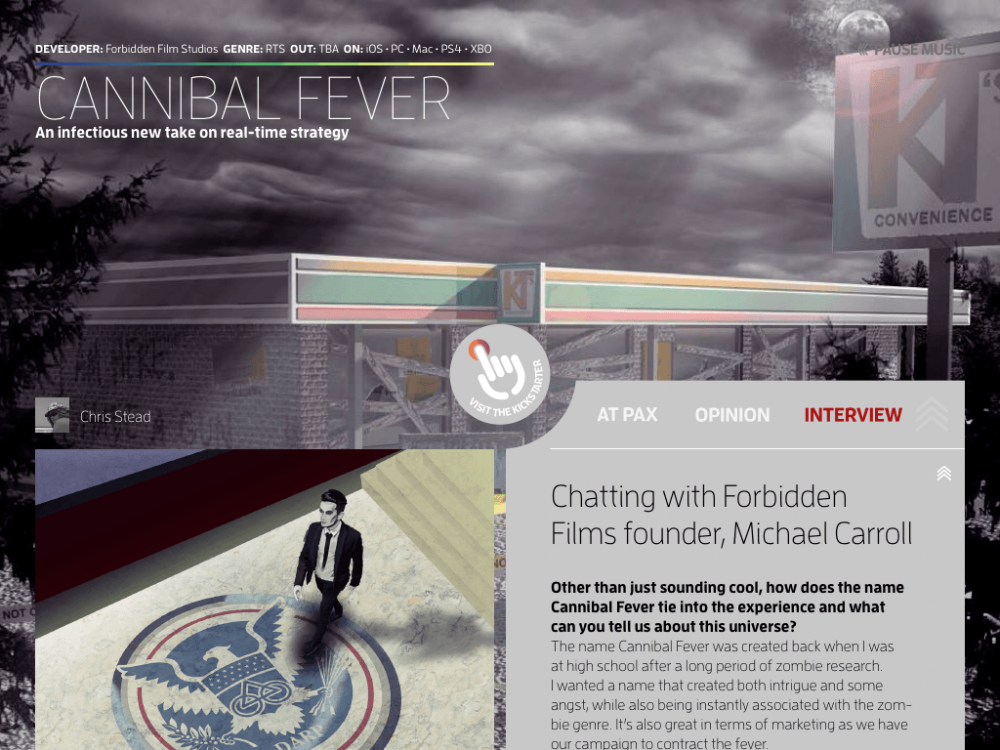 The Penny Arcade Expo (PAX) is always a smorgasbord of game announcements and new projects. When writing Grab It's PAX AUS companion app we stumbled upon Cannibal Fever, announced this year by Forbidden Film Studios. It’s an ambitious project by this small Victorian developer with a background in films. If you’re tired of the industry making cookie cutter zombie shooters, and want to see something with more substance, this could be for you. Cannibal Fever looks smart, tactical, multi-faceted and challenging.

The Kickstarter campaign has only just begun, working towards a $550,000 goal in 29 days.

Cannibal Fever is slated to be a fast-paced real-time-strategy game about leading a horde of zombies. The story involves an avant-garde marketing campaign for the latest zombie film Biohazard triggering the real zombie outbreak. Plunging the world into chaos, and the player into a writhing mess of undead shamblers. The player takes on the role of the leader of the zombies, or the leader of the surviving humans.

Rather than the usual RTS progression of collecting resources and building units, Cannibal Fever starts at the combat phase, in which you send units to capture buildings and spread the disease, or reinforce to defend, depending of course on your choice of faction. Michael Caroll - founder of Forbidden Film Studios - chatted to us about what seperates Cannibal Fever from the traditional RTS formula, citing Red Alert, Age of Empires and Z as his top influences:

“No zombie is going to be gathering supplies or building structures, but we wanted to be able to control hordes of infected. The universe is diverse and is meant to be explored and experienced, not just played.”

The Kickstarter campaign has some ambitious goals, but ones that use the studios background in filmmaking. A number of voice actors are already attached to the project including John DiMaggio, Jim Cummings, and Jamieson Price as well as other secret actors. Characters are also going to be entirely animated using motion capture technology, giving personality and realism to their movements. Finally - in the vein of Command and Conquer - the story is going to be told through live action cut scenes. We asked Michael Caroll about telling stories in this medium:

“During the years we have been operating we have gathered a great bunch of people from all aspects of our industry. I think that this is really important so that we can create the best product possible and push what is capable in gaming.”

Check out the rest of our interview and opinion in the Grab It PAX AUS episode out now on the App Store, and currently free. Also, head over to Kickstarter to have a look at the project.