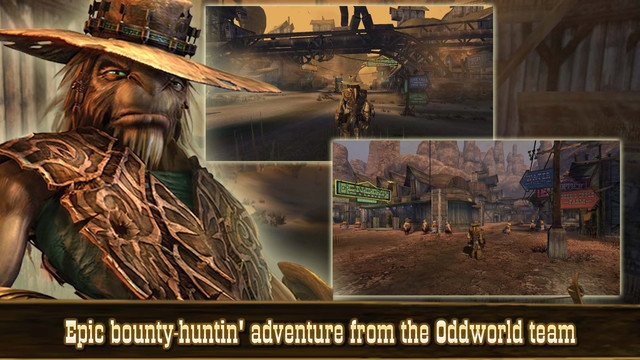 Update: Oddworld: Stranger's Wrath seems to have missed its original release target of Q2 by exactly two quarters, but with gaming classics, the old adage of better late than never still holds water. To be honest, until it showed up on the App Store today, I'd completely forgotten about it since posting the original story back in March, which you can read below. Grab the game right here and let us know on the social feeds what you think as far as how successfully Stranger's Wrath has translated to touchscreens. Enjoy!

Original Story: In 1997 Abe's Oddysee launched on the PlayStation One, blending dark humour, subversive social commentary, fresh puzzle platforming ideas and visuals that were next-gen for its time. These ingredients all came together to forge an absolute classic.

Several games followed all set within the Oddworld universe, including Stranger's Wrath in 2005. The tale of a bounty hunter saving up money for his operation is being brought to iOS by developers JAW (Just Add Water) and Oddworld Inhabitants.

Combining third-person adventuring with first-person shooting (with ammunition that gives a new meaning to "live ammo"), the gunplay will be an important factor in the success of Stranger's transition to touchscreens. The developers are giving players a choice of aiming via a virtual joystick, or a gyroscopic method, with movement to be handled using a twin-stick approach. We'll be keen to see how all this comes together in the final product.

Enhanced visuals, an interface redesigned for touch and hidden easter eggs (!) are also on the list of things to look forward to.

Oddworld: Stranger's Wrath is set for a Q2 2014 release, which means we won't have to wait long. It's great to see developers bringing these former console and PC classics to iOS, and taking the platform seriously. Check out the trailer, and also check out some other classics that have already made their way to iOS in the awesome list below.