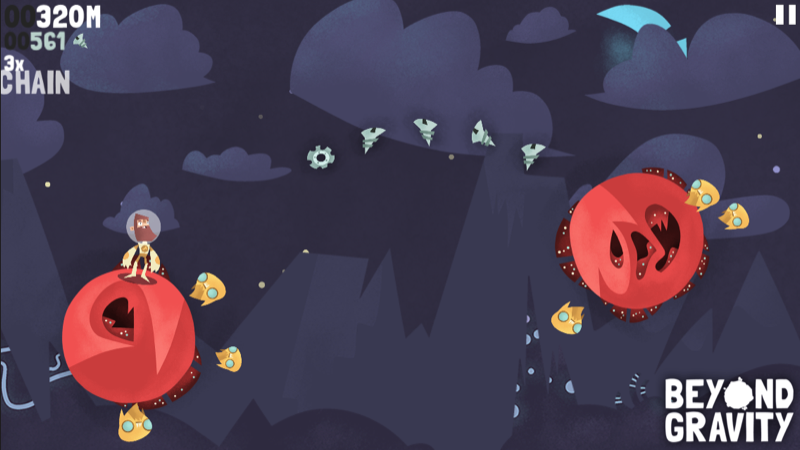 There’s no need for alarm, but you do need to follow my instructions carefully. First, go and quickly close the curtains. Then unplug the phone (does anyone have a landline anymore?) and cancel any social gatherings (yes, even box socials) you may have planned for the next month. Take a deep breath and prepare yourself because you’re going to need an insane amount of time to experience all of what the top ten premium games of July have to offer. More so than any other month in recent memory, the games on our list for July are quite an eclectic bunch. Everything from an epic monster hunting adventure in which you could easily sink hundreds of hours to a heart-pumping gun-toting first-person shooter to a game where you experience life from the perspective of a mountain.

If you somehow manage to get through all of these amazing games, you may also want to check out our Top 50 Best iOS Games Of 2014 So Far. If you see a game you like, you know what to do – grab it!


10. Beyond Gravity (Qwiboo)
Compared with most other games on this list, Beyond Gravity is quite a simple affair. But it is a simple idea executed very well. With your spaceship having been destroyed, the only means of surviving the delightful cartoony vacuum of space is to jump from planet to planet. Each celestial body rotates in its place, meaning timing is everything to achieve that perfect space jump. Defying the wacky physics of space poses a serious challenge for those willing to take it on. Fortunately, it is a challenge that always feels achievable thanks to smart level design and unlockable upgrades. Like a well manicured English gentleman, Beyond Gravity simply exudes charm, meaning you’ll be strapping on your moon boots more often than not.
Grab It Now

9. Civilization Revolution 2 (Firaxis Games)
Did you know that a synonym for the word “strategy” is “Sid Meier?” Ok, I might be wrong about that, but we all owe a significant debt of gratitude to the grandfather of strategy games. Revolution 2 is the first game in the Civilization series to be designed exclusively for mobile devices. Interestingly, Revolution 2 takes a rather streamlined approach compared with its big brother counterparts, with much of the complex strategy elements paired back. Ponder on that what you will, but it makes Civilization a far more accessible title for newcomers. And what certainly isn’t missing is the absolute joy of getting drunk on power and commanding an empire to satisfy your every whim.
Grab It Now

8. Blackwell: Convergence (Wadjet Eye Games)
Wadjet Eye Games is well-known for its noir-inspired point-and-click adventure series, Blackwell. The series is refreshingly offbeat, unless you consider a game that follows an introverted female journalist and her family spirit guide in a quest to guide other spirits into the light a rather normal premise. Originally a PC-only title, the first three games in the series were recently ported to iOS. The third game, Convergence, is by far the best of the trilogy. Visually it is the most impressive, with a sharp art style that remains true to its noir-inspired roots. But what sets Convergence apart is the cleverness of the puzzles wrapped around its intriguing story. Wadjet Eyes Games doesn’t take the player for a fool, with solutions to puzzles requiring some genuine flexing of your brain muscle. Convergence is both an excellent introduction to the Blackwell series and a great game to showcase the awesomeness of point-and-click adventures on mobile devices.
Grab It Now

7. Hellraid: The Escape (Techland, Shortbreak Studios)
While anticipation has been building for Techland’s upcoming hack-n-slash adventure Hellraid, on PC and consoles, a mobile spin-off was recently released with relatively little fanfare. But it’s surprisingly good. If the title didn’t give it away, Hellraid has quite dark undertones with a sorcerer having imprisoned your soul. It’s your job to figure out why, but more importantly to get the heck out of there. All manner of foul beasts stand between you and sweet freedom, and are more than happy to oblige by killing you over and over again. Broken up into a number of self-contained levels, the emphasis is on using your wits to escape rather than frenetic button-mashing action. The puzzles are clever and challenging, and make smart use of the iPad’s interface. The Escape is not only an excellent introduction to the Hellraid universe, it is a worthy standalone title.
Grab It Now

6. Modern Combat 5: Blackout (Gameloft)
Praised by some (and with tongue-in-cheek by others) as the Call Of Duty of mobile devices, you know what you’re going to get with the Modern Combat series – slick, fast-paced action with big setpiece moments. Modern Combat 5: Blackout does not disappoint, with Gameloft once again showing why it is the master of the mobile first-person shooter. Gameloft has worked harder than ever to make Modern Combat as accessible an experience as possible, with a wide variety of control options to ease players into the FPS action. Satisfying gunfights and a deep customisation system round out what is not only the best entry in the series, but one of the best FPSs on iPad.
Grab It Now

Also check out our Top 10 FPS Games on iPad, in Episode 2 of Grab It.

5. Monster Hunter Freedom Unite (Capcom)
Have you ever noticed how many games start out with the promise that it offers the boldest and deepest experience you have ever played? Such games clearly haven’t met Monster Hunter Freedom Unite. Capcom’s port of the 2008 PlayStation Portable cult hit will have you setting out on one of the most epic adventures available on iPad. There’s no mistaking what this game is about – hunting monsters. And what a satisfying experience it is. But satisfaction doesn’t come purely from besting monsters much more powerful than you: it is the thrill of the hunt. Spending hours methodically preparing a strategy, training your character and collecting loot merely scratches the surface. If you have a spare few hundred hours, then you may just be able to get through all this game has to offer.
Grab It Now

4. MTN (David O'Reilly)
Even after playing Mountain, I still don't quite know what the heck it is. Mountain isn't a game in the traditional sense. There aren't any controls and you don't really do anything. You are simply a mountain, endlessly floating, merely existing. Days drift by leisurely. All you do is observe and listen to the musings of your mountain. Mountain rewards those who persist. Not with unlockable in-game items, achievements or bragging rights for being the top of the leaderboard. But with the reward of simply existing as a mountain. Odd rewards you might think, but ones that have much more significance when you begin to appreciate Mountain for the experience that it is.
Grab It Now

3. The Wolf Among Us – Episode 5 (Telltale Games)
After being agonisingly drip fed episodes of Telltale’s The Wolf Among Us over 8 months, the series has finally wrapped up in style. In doing so, Telltale has erased all fears that it is merely a one trick pony following the success of The Walking Dead. The end of Sheriff Bigby’s first outing is an ultimately satisfying one, tying up all the loose plot threads while leaving one final mystery for the inquisitive to unravel. But the stand out of this episode is Sheriff Bigby himself. The choices made as Bigby throughout the course of the game come to fruition and the consequences need to be dealt with. It is a powerful experience and one that will leave you reflecting on your own moral compass.
Grab It Now

2. 80 Days (inkle)
Digital gamebooks are so hot right now. 80 Days by inkle is based on Jules Vernes' classic 1873 novel Around The World In 80 Days. Similar to the novel, 80 Days follows the stories of Phileas Fogg and his faithful valet Passepartout as they race around the world to win a handsome wager made with some snooty English gentlemen. What sets 80 Days apart is that your choices have a massive impact on the story progression, with over 150 cities to visit. Multiple playthroughs are a must! But what will stick with you the most is the people you meet in your travels, enriching the game in such a way that you’ll want to pack your suitcase once more and set off on another trip all over again.
Grab It Now

1. Traps n' Gemstones (Donut Games)
Deliciously named developer Donut Games rounds out our top 10 list for July. Seriously, Donut Games deserves top spot purely on the basis of its name. But it just so turns out that its 2D action platformer, Traps n' Gemstones, is a gem not to be missed. What makes Traps n' Gemstones even more impressive is that it is unlike anything else Donut Games has released to date, which has traditionally focussed on casual titles. Traps n' Gemstones gives off a really fun vibe – think Indiana Jones mashed together with the classic Metroidvania level design. And with elements of puzzle solving, loot collecting and exploration on offer, Donut Games has squeezed a lot of fun gameplay ideas into this excellent adventure.
Grab It Now

Is there anything we missed from July that should have made it into the top 10? Disagree with something that has made it on the list? Let us know through our social media channels or in the comments below.