Those of you who have picked up Episode 4 of Grab It will have caught some of the tunes from the atmospheric platformer Last Inua already. As you read through our world exclusive making of feature, the score plays in the background. As part of our coverage of the game leading up to its release on May 8, we have managed to secure six of the songs from the soundtrack that you listen to right now through Soundcloud below. We hope you enjoy the listen and be sure to check out the feature in Episode 4, which is joined by a hours of other great content. For music buffs, this includes an interview with composer Nathaniel Chambers on how he goes about creating soundscapes for indie games, and our Top 10 Musically-Driven Games on iPad.

Also remember that anyone who signs up for our Twitter or Facebook pages, and/or shares one of our comments or posts, before May 8 instantly goes into the running to win one of five copies of the game.

If you've been keeping an eye on the site, you'll know that Episode 4 of Grab It is now on the App Store - yay! - and that we have a world exclusive making of feature for Last Inua, by Glowforth Game Studio, on our cover. You can grab the episode here - it's an amazing story. We are currently drip-feeding new details about Last Inua each day in the lead-up to its release, and today we have a gameplay trailer for you to enjoy below. And then there is also our competition.

For a chance to WIN a copy of Last Inua, all you need to do is share this story through one of the social feeds above and put a #grabitmag in there so we can track it. When the game comes out we'll pull out five names and award them a copy of the game. The more you share, the better your chance.

We hope you have had a chance to enjoy our world exclusive making of feature for Last Inua, by Glowforth Game Studio, in Episode 4 of Grab It. If not you can grab the episode here - it's an amazing story, and there is stacks of other content to enjoy, too. Today we have some good news for you. The wait for this excellent platformer isn't going to be a long one, with the developer revealing that May 8 will see its worldwide launch. Ink it in gamers.

While we wait, here is a new screenshot for you to enjoy. It's from inside a Polar Bear - correct, you get to platform through the guts of this beast. 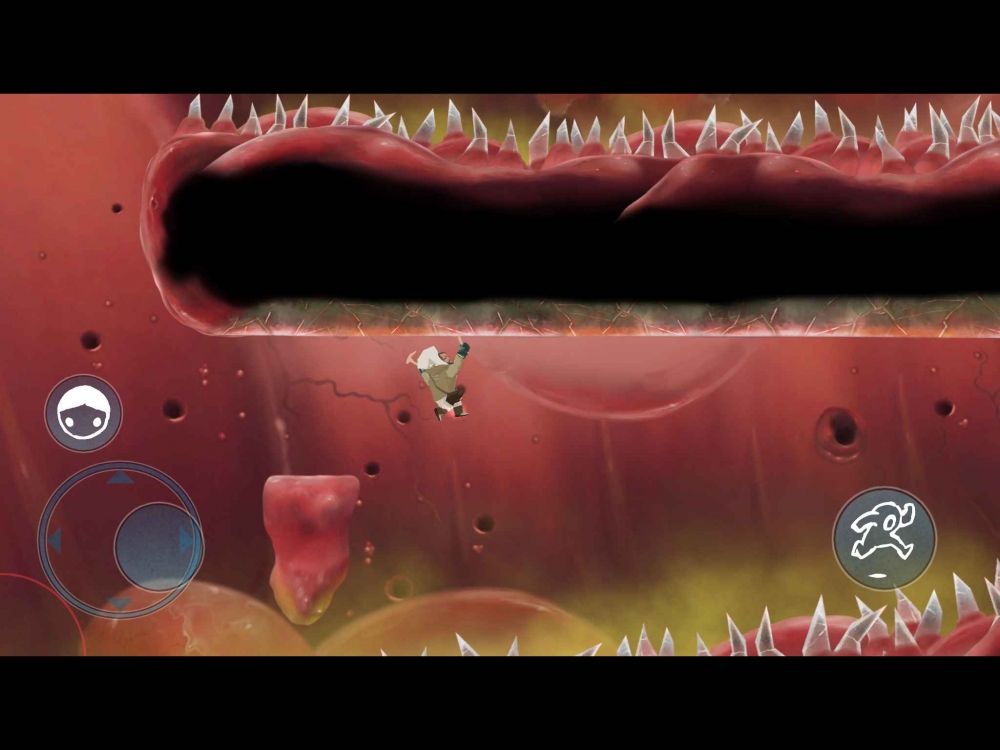 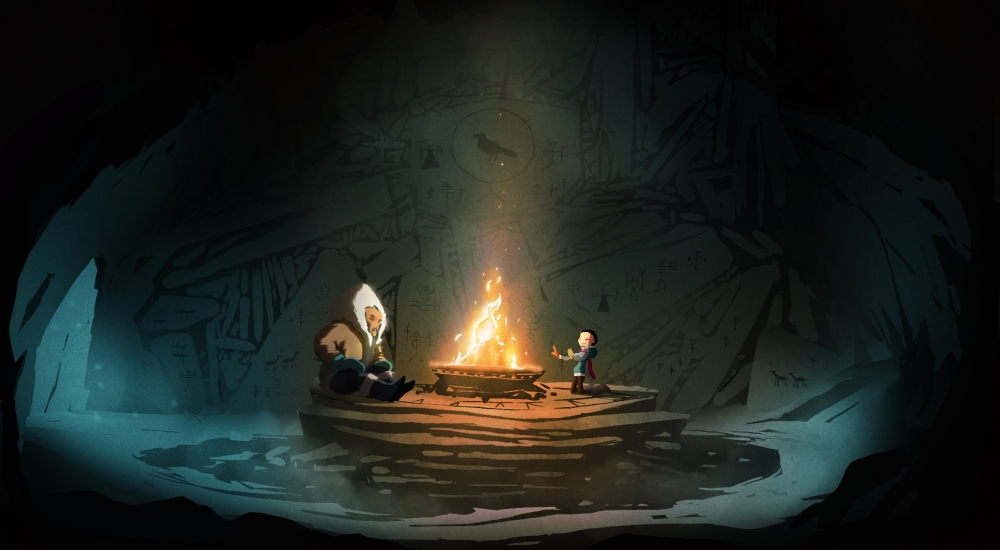 For those of you who missed our big Episode 4 reveal yesterday, the latest edition of Grab It stars as its featured game, Last Inua. Developed by Glowforth Game Studio, this visually stunning atmospheric puzzle platformer will be hitting the App Store very shortly and we have - amongst many other stories - a world exclusive Making Of feature on the game. You can download the latest episode here:

Perhaps one of the most inspiring aspects of the game's development is how it was created by a team with basically no experience making games. Inspiring because the finished product is so polished and fun, and the vision so well realised.

Here is a little snippet from the Making Of; a quote from Glowforth founder Zoot Nel:

“The ambition was to just start from somewhere and then move forward step by step. However, we started to build the game as a team with only one programmer that had done it before; the rest had really no clue what was coming. So at the time the question was not only about how to make it happen, but how to set a clear focus. How to choose the one idea between so many.”

For a chance to WIN a copy of Last Inua, all you need to do is share this story through one of the social feeds above and put a #grabitmag in there so we can track it. When the game comes out - we will reveal the date tomorrow - we'll pull out five names and award them a copy of the game. The more you share, the better your chance.

In the meantime, grab Episode 4 now and immerse yourself in the visually spectacular world of Last Inua. 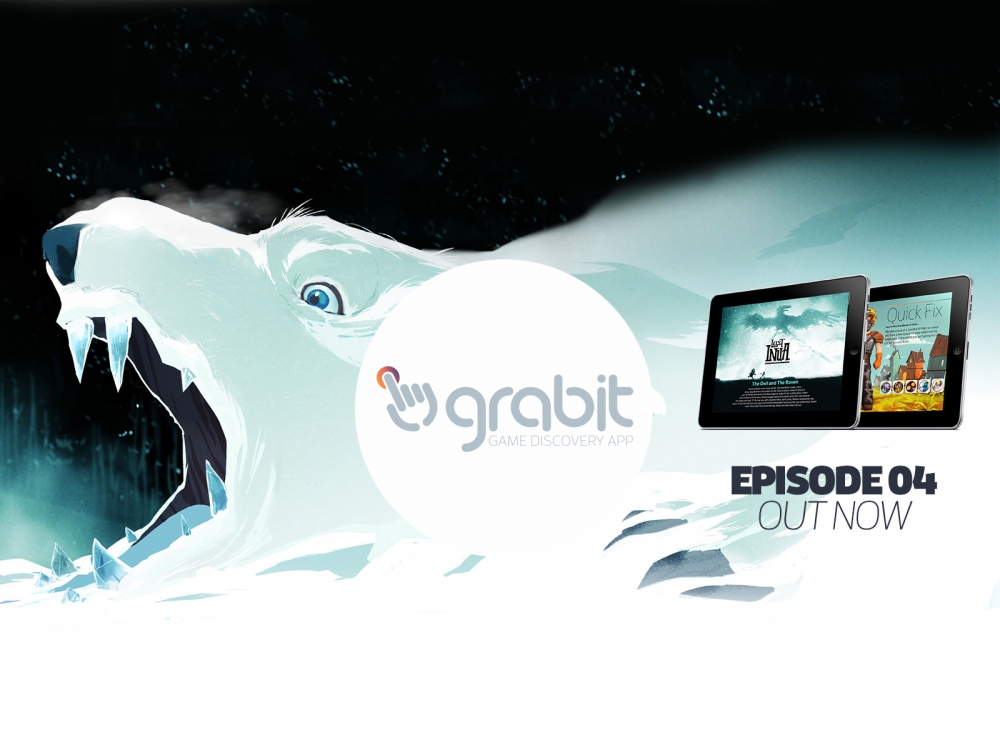 It’s with great excitement that we announce that Episode 4 of Grab It The Game Discovery App is now available on the App Store. You can grab it here for the bargain price of $2.

Our feature game is the atmospheric and visually gorgeous puzzle platformer Last Inua by Glowforth Game Studio. After catching our eye with its initial video teasers, we began chatting with the European-based studio about the experience they were creating and were suitably impressed. Shortly after we began working on a detailed making of feature to showcase Last Inua in our interactive game discovery app. Filled with insightful quotes, concept art, sound bites and footage, the making of will take you deep into the development journey of this great game.

Want to WIN a copy of Last Inua? Over the course of the next week, we will be celebrating Episode 4 with a number of exclusive stories on this blog about Last Inua. To go in the running, share a link to any (or all) of these stories via your social sites and include the #grabitmag so we know of your awesome support. The more times you share, the more chance you have of winning. We'll be giving five copies of Last Inua away the day it goes on sale to those who got involved.

It is, of course, but one of a number of highlights in this episode. Rodeo Games’ co-founder Ben Murch (Warhammer Quest) drops by with an intriguing tale about his journey into game development, which is a super insightful and fun read, especially for those thinking about getting into game development. We also speak to Disruptor Beam (Game of Thrones: Ascent), Treefortress Games (Bardbarian), Artifex Mundi (Nightmares from the Deep) and Kamibox (Sometimes You Die) about the challenges, successes and big decisions they faced in the creation of their latest releases.

We have something of a music theme to this episode, too. Indie composer Nathaniel Chambers tells us all about why creating the soundscapes for indie games is such a complex, fun and rewarding experience, offering up some great tricks of the trade and handy software tips. In honour of that, we run through the top 10 musically-driven games available on iPad – you’ll be surprised by some of the big stars in involved in that.

You’ll also find a stack of news and opinion, plenty of interactive elements to play with, theme songs, 10 reviews and video footage, and plenty more. Grab It now and discover something new.