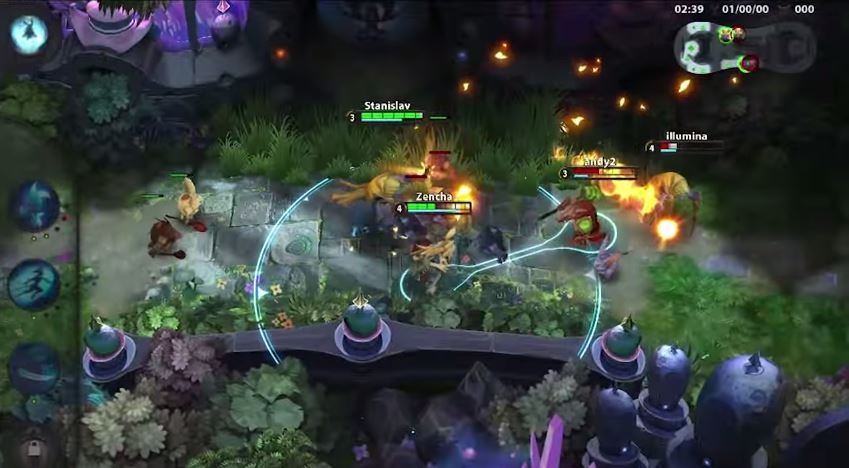 It’s both crazy and awesome, all at the same time, that there’s only seven weeks left till Christmas! Where did that year go? Perhaps you’re saving a pretty penny or two to buy presents for your loved ones (i.e. yourself?) Or maybe you’re holding out for some sweet post-Christmas sales. In any case if spending your hard earned money sounds too much like a chore, rest easy. We’ve put together our top 10 best free iOS games for the months July through September. For the wonderful price of absolutely nothing, you can’t really go wrong by picking up a few of these stellar titles.

When you’re done checking out the following games, be sure to also have a look at our Top 50 Best iOS Games of 2014 So Far (January to June) and our Top 10 Best Premium iOS Games of September. Still not enough gaming for you? We just released our biggest episode ever, covering all of the amazing indie devs who were on show at PAX Australia. Even better, it’s free right now for one more day! Grab it here.


10. Max Gentlemen (The Men Who Wear Many Hats)
Some games are like complex pieces of art. They lead us to stroke our imaginary beards (or real as the case may be) while we turn an introspective eye on ourselves to ponder the meaning of life. And then there’s Max Gentlemen, a game that’s all about stacking hats in the most gentlemanly manner possible. Truly. One minigame pits you against a well-manicured gentleman in a bar where every beer you manage to drink before your opponent gives you another hat to stack. This all takes place while avoiding flying boomerangs and darts, with a brawl going on in the background involving muscly men hurling gentlemanly insults at each other. It’s ludicrous and completely wacky, but also a very fun diversion especially when played with mates.
Grab It Now

9. Melissa K and the Heart of Gold (SDP Games)
Hidden object adventure games are a dime a dozen on the App Store, so it takes something pretty special to stand out. Melissa K and the Heart of Gold is one of those games. Melissa K has to be one of the best looking games I’ve ever had the privilege to play. From the lush foliage of the deep jungle to the opulence of Buddhist temple grounds, the exquisite worlds are a pleasure to explore. The variety of challenges and puzzles on offer are also second to none. Throughout my six hour playthrough I never encountered the same puzzle once, which kept the game always fresh and exciting. You can play Melissa K for free for several hours before you need to pay to unlock the rest of the game. But by then you’ll be well and truly hooked.
Grab It Now

* To read our full review of Melissa K, be sure to pick up Episode 7 of Grab It

8. Sky Force 2014 (Infinite Dreams)
if you cast your mind back 10 years, you may recall a little arcade title called Sky Force. Enter 2014 and we now have a 10th anniversary edition, back bigger and better than before. Sky Force recalls the glory days of vertical scrolling shooters with lots of explosions, insane power ups, badass bosses and absolutely no cover. With a one touch mechanic, the controls are as simple as you can get and feel incredibly responsive. Might I say the game looks downright gorgeous too, with Infinite Dreams doing a wonderful job of updating the game for the modern era. Every now and again it's nice to pick up a game where no thinking is required, apart from watching lots of baddies explode in a satisfying hail of destruction.
Grab It Now

7. Pokemon Trading Card Game Online (The Pokemon Company International)
Pokemon is slowly but surely taking over the world. And I’m ok with that so long as they continue to pump out quality merchandise. Pokemon Trading Card Game Online is basically a trading card version of the TV show. Which is totally a good thing. Building a deck of Pokemon is thoroughly satisfying, while armchair strategists will have a field day with the depth on offer. But even though the game is naturally tuned directly into the hardcore Pokemon community, non-fans wanting to have a look-see will also have a blast. The learning curve is gentle and newbies can use prebuilt packs. Post tutorial, the game is stuffed to the brim with content including online games against friends or strangers, tournaments and a massive solo campaign. In terms of polish and depth, it’s every bit as good as other heavyweights like Hearthstone or Magic 2015.
Grab It Now

6. Tiny Tower Vegas (NimbleBit)
As the latest installment in the Tiny Tower series, NimbleBit hasn’t strayed far from the tried and true formula for Tiny Tower Vegas. For rusted-on fans, basically just imagine Tiny Tower infused with a gambling theme. But for those unfamiliar with the series, Tiny Tower is a sim management game where the objective is to effectively manage your tower by progressively opening up new floors, stocking them with over-the-top enthusiastic employees and reaping the benefits of greedy consumerism. In Tiny Tower Vegas, the blueprint remains the same, except it’s all about filling your tower with retail shops, penthouse suites and gaming rooms. Although micro managing your employees and running a business may sound too much like work, NimbleBit manages to take the edge off with an injection of charm, cheerful environments and cheesy characters.
Grab It Now

5. Paperama (FDG Entertainment)
Sometimes the best games are those that you stumble upon by accident. Paperama is one of those games that I happened upon by chance but which now has a permanent place on my iPad. At a glance, Paperama has a very simple premise: fold origami. But despite first appearances it’s actually quite a challenging game which will have you thinking outside the box. Each level throws down a new challenge, requiring a certain object or animal to be made within a given number of folds. It’s a more subdued experience than most people will be used to, but one that is genuinely relaxing, rewarding and just a little bit different than anything else out there.
Grab It Now

4. Angry Birds Stella (Rovio)
You’d think after having their precious eggs stolen time and time again, the titular Angry Birds would smarten up and set up shop elsewhere. Apparently not. Angry Birds are back for another round of catapulting and demolishing the structures of their arch nemesis, the pigs. This is the Angry Birds that we’ve all come to know and love with a few minor tweaks to the gameplay, including new powers and coins to collect. There is also a new protagonist in the form of the lovely Stella. It’s not radically different from what we’ve seen before, but Rovio has clearly mastered the addictive formula while giving us even more features we didn’t know we wanted. With interesting level designs and an infectious cheery attitude, more Angry Birds is never a bad thing.
Grab It Now

3. Phoenix Wright: Ace Attorney - Dual Destinies (Capcom)
Everybody’s favourite lawyer (yes, some lawyers are actually tolerable) returns to the courtroom for another round of crazy antics and incessant shouting of the word ‘OBJECTION!’ As a port of the 3DS game, Dual Destinies is a natural fit on our trusty mobile devices. If you haven’t come across Phoenix Wright before, the game is more in tune with the likes of an interactive novel with less focus on gameplay mechanics. At most, you’ll be asked to piece together a trail of evidence and select from a number of dialogue options when interviewing/prosecuting a witness. Phoenix Wright himself is likely a bit crazy – imagine a Japanese version of Allan Shore from the TV show Boston Legal and you’re pretty much on the money. This makes for some incredibly bizarre and head-scratching courtroom interactions. But that’s what makes this series so special.
Grab It Now

2. Fates Forever (Hammer and Chisel)
Perhaps when you think of a MOBA (multiplayer online battle arena,) the first thing that comes to mind is heavy hitting titles on PC from the likes of Blizzard. Well, the humble MOBA has outgrown its simple roots with mobile gamers able to get in on the experience in the form of Fates Forever. You may be sceptical about whether the complexity and strategic depth of a MOBA translates well to a mobile device. Rest assured, Hammer and Chisel has crafted an experience on par with any PC title. In fact, in our review of Fates Forever we called it a fully fledged MOBA experience “that stays true to the recipe that has made the genre so successful while making as few concessions as possible for the mobile experience.”
Grab It Now

* To read our full review of Fate Forever, including an interview with the co-founder of Hammer and Chisel, be sure to pick up Episode 7 of Grab It

1. Magic 2015 (Stainless Games)
Rounding out our top 10 free games for July through September is a game with a long history and one which commands an almost religious following of hardcore fans – Magic: The Gathering. Undoubtedly, anyone that’s been around long enough will have heard of Magic and the legacy that’s been left in its wake. However, when Magic made the jump into the digital world a few years ago, there was a yearning gap between it and the physical tabletop version. Wizards of the Coast has clearly been listening to fan feedback over the past few years, with Magic 2015 being the most refined and engaging digital iteration yet. Not only does Magic 2015 offer far greater strategic depth for fans, it is also very welcoming to new players. The effort that has gone into bringing the game closer to the beloved real-world version pays off in spades, proving beyond a shadow of a doubt that Magic remains the undisputed king of digital collectible card games.
Grab It Now

* In Episode 6 of Grab It, we have an exclusive in-depth feature of the making of Magic 2015, as well as a detailed review and a guide from competition player and judge, Matt Baird, on how to get started playing Magic.