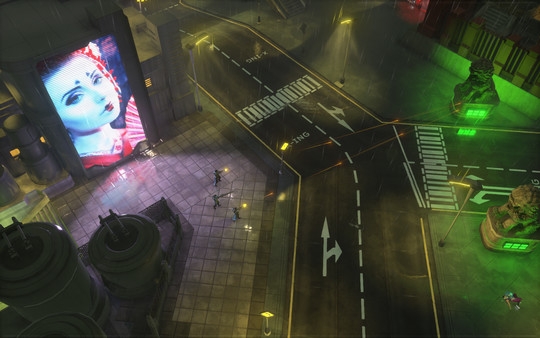 This might come as quite a surprise, but it’s now been 20 years since iconic developer Bullfrog released its critically acclaimed tactical shooter Syndicate and sequel Syndicate Wars. Feeling old yet? The Syndicate series is one of those games that always features high on critics’ must play lists. And for good reason. The gritty real-time isometric squad shooter laid down a blueprint for not only the many games that sought to emulate it, but for an entire genre.

Unfortunately, following the release of Syndicate Wars in the mid 90s and with the shuttering of Bullfrog in 2001, the series largely went dark. Sure, there was a reboot in 2012 that reimagined Syndicate as a first person shooter. But the less said about that game the better.

For years, hardcore fans clamoured for another entry in the series that remained true to its roots. While we may never see another classic game with the Syndicate branding on it, we’ve got the next very best thing - Satellite Reign.

Australian-based developer 5 Lives Studios took to Kickstarter in June 2013 with the promise of creating a true spiritual successor to Syndicate Wars. With several developers from the defunct Bullfrog on board, the promises were lofty and expectations even higher. With over 15,000 backers giving their blessing to 5 Lives Studios to the tune of $500 000, fans were excited.

But the fact is we all have fond memories of Syndicate. So to take on a project such as this shows that 5 Lives Studios has a decent set of cojones. Mess with the formula and you mess with our nostalgia. So how is progress on Satellite Reign? Is it actually shaping up to be a true spiritual successor to Syndicate Wars?

Even at this early stage, I love what 5 Lives is looking to achieve. 5 Lives has managed to capture that feeling of a futuristic, sci-fi cyberpunk city in the vein of Bladerunner or Deus Ex. Giant billboards advertising sleazy strip joints flicker with garish neon lights. Citizens rush by, eyes downcast, not wanting to be caught even giving so much as a sideways glance at their neighbour. The soldiers of the totalitarian regime cluster together flanked by the all seeing, all knowing floating cameras. The atmosphere is one of a once vibrant yet seedy metropolitan city having been trampled underfoot by the crushing oppressiveness of big brother. 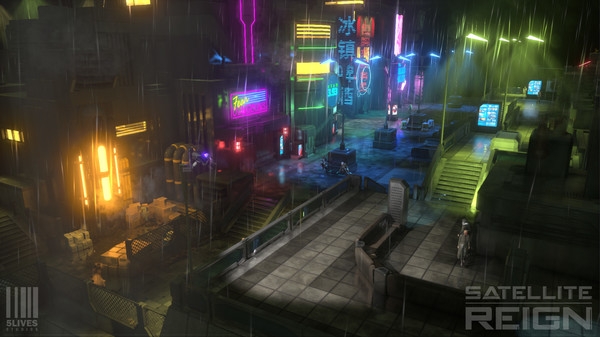 This is exactly the atmosphere that 5 Lives is looking to immerse us in, and where we find ourselves thrust in. In the words of the dev:

“The world’s governments are manipulated by mega-corporations. Society is structured to the benefit of those in power and corporate police patrol the streets to maintain the status quo. But now, a mysterious organisation has risen from the depths of the city. They’ll have to bribe, steal, hack and augment their way through the barriers between them and their ultimate goal. But what are they trying to achieve? To free the masses from the corporate stranglehold, or to take control for themselves?”

Although there is alot of work to still be done on beefing up the visuals and squashing numerous bugs, I was in awe at how gorgeous Satellite Reign already looks. The flickering lights of the city’s lampposts shimmer off rainwater puddles on the sidewalk. Buildings are gorgeously detailed down to the finest line. Discarded rubbish litters alleyways. My eyes were drawn all over the screen to the brightly lit advertising. Frankly, I truly believed in the city that 5 Lives has created. I could totally be convinced that it exists somewhere. Not that I’d want to live there!

In exactly the same fashion as Syndicate Wars, I controlled a team of four agents making decisions in real-time. But unlike Syndicate, I really appreciated that each agent is not simply a carbon copy of one another. Each has their own unique and distinct abilities. One of my agents was proficient in the ancient art of shooting people in the face while another excelled in hacking. This meant that I was genuinely invested in each of my agents, taking care to keep them alive. I imagine that further customisation and upgrading each character will play a big part in the rest of the game.

The handful of missions that I played were genuinely interesting and meaningful. Rather than resorting to mere fetch quests or busy work, each mission had a permanent impact on the game.

An early mission tasked me with rescuing the fourth agent of my gang. After bungling a lame attempt at sneaking into the military base, all hell broke loose resulting in an intense firefight with a bunch of goons. The AI is still a little underwhelming at this stage, but I wouldn’t expect anything less from a Steam Early Access game. However, after hightailing it out of there I had gained a fourth member of my party, who happened to be quite proficient in the art of hacking.

I should also note that I appreciated the freedom given to me to approach this mission. From the outset I had the option to go in all guns blazing or take a more stealthy approach. The dev has noted that these choices will permeate the whole game. Handing choice over to the player is empowering.

Another mission tasked me with infiltrating the headquarters of a surveillance company and hacking into their database. Naturally, the place was well protected by guards and security cameras. With a healthy dose of luck, I surprised myself by making it through undetected. After hacking into their system, the speed of the surveillance equipment in the sector was permanently reduced by half. This paid off in later missions when I was able to sneak by various surveillance equipment which moved at a snail's pace. 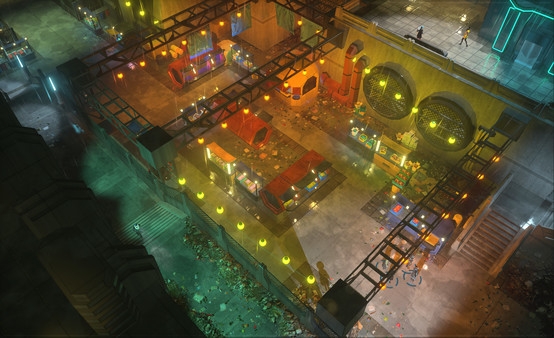 Even at this early stage, dare I say that Satellite Reign is the spiritual successor to Syndicate Wars we’ve been patiently waiting for all those years. There’s still a fair bit of work to go into the game but 5 Lives is responding promptly and with open ears to the feedback from Steam Early Access users.

There is currently no information on when 5 Lives is planning to release Satellite Reign in its final form. But when it does, it will be coming to PC, Mac and Linux. If you can't wait that long, however, you can always buy into the Steam Early Access game (which can be found here.)

Further information on Satellite Reign can be found on the dev's website. Also, be sure to check out the trailer below.