Overcooked is developed by first time chefs Ghost Town Games, and published by Team17. You may remember Team17 as the guys who made the Worms series, and in this instance its pedigree for multiplayer mayhem shines through.

Overcooked is a frantic, multiplayer cook-em-up that has you managing a kitchen with up to four players. It's like Cooking Mama meets Broforce: you have all these players working toward the same goal, but you often spend more time burning food, dropping ingredients and falling off moving vehicles than meeting orders.

When everything goes well, it’s a brilliant ode to cooperation and coordination. When things go poorly, it’s a kitchen nightmare that would make Gordon Ramsay squirm. 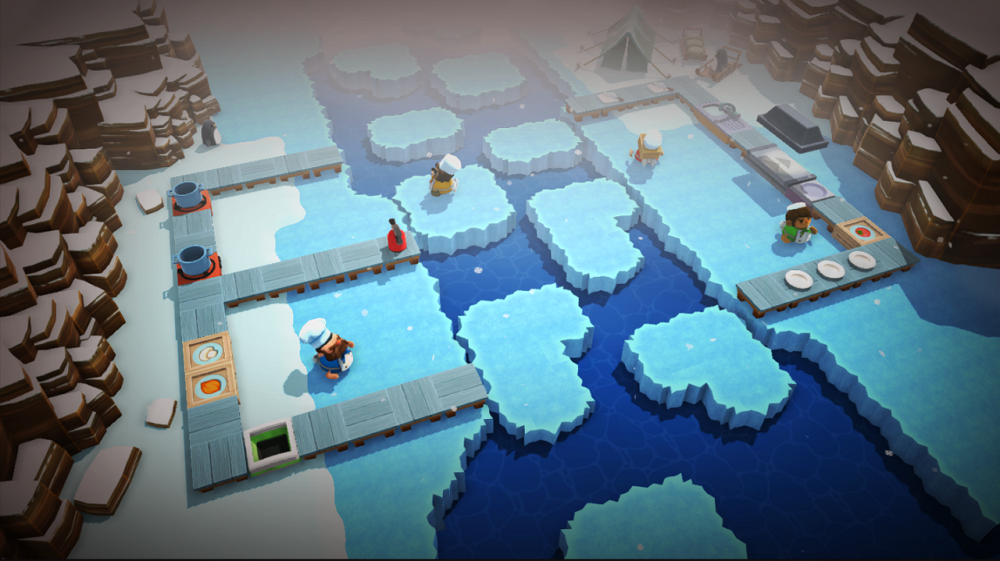 The basic gameplay is relatively simple in theory: orders come in, you chop the ingredients, cook them and serve them to customers. However, in practice it is a very different kettle of fish.

Every level is completely different, but the recipes stay the same. So each time you’re forced to mix up your strategies to meet the new conditions. Early levels have you cooking over a lane of pedestrian traffic and dodging passers-by, but later on you'll be sliding across giant floating blocks of ice in a frozen river cooking fish and chips for Eskimos.

The levels are specifically designed to stop you planning and keep you on your toes. They all fit into themes, from suburban kitchens to pirate ships, haunted castles and moving vehicles.

One of my favourite levels had us cooking in two mirrored halves of a kitchen with a giant conveyor belt circling the outside. We were set to create burgers that needed a cooked meat patty, chopped lettuce, chopped tomatoes and a bun. I only had the cookers and the ingredients on my side, so everything needed to be taken out of crates, put onto conveyors and chopped up by my team mates on the other side before I could cook and send it back to be plated up. 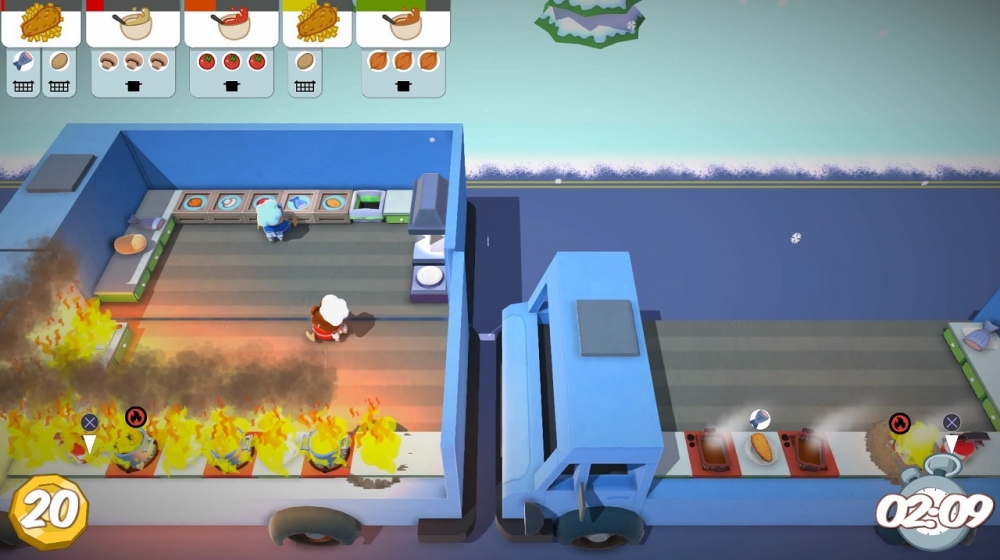 We don't have much thyme!

All this culinary madness is loosely framed in a story about protecting the world from a giant spaghetti monster. You trundle around the overworld in a little yellow bus from level to level and unlock new areas in which to cook. Each level can be beaten relatively easily, but the game relies on the three-star system popularised by games like Angry Birds, which keeps you coming back to your favourite kitchens and trying to out-cook your best records.

The real pressure here is the timer, Overcooked levels are short enough to pick up and play, but fast enough to force you into a frenzy. Most levels fall in around the 4-5 minute mark, with a large timer keeping track in the bottom corner. Brilliantly, the music is paired with the timer, so it picks up and gets ever faster as the timer ticks down. This is the best kind of game audio interaction; it drives you faster without realising and keeps you aware of the gameplay even as you're focusing.

Now despite all this praise; Overcooked isn't flawless. It's not a game that you'll pick up and play on your own - with one player you swap back and forth between chefs to get things done, while the other stands by and watches things burn. It's undeniably harder, but lacks the character and frantic charm that you get from playing with friends.

There are also some little quirks with dropping items and picking them back up - occasionally the game  doesn't see you standing in the right space to select an item and you need to move around to make it pay attention. But these are like one bad experience at your favourite restaurant; you'll likely move on and go back again.

There is also a competitive mode that needs to be called out, though the crux of the gameplay is in co-op, having two rival kitchens competing for degustational dominance is the icing on the proverbial chocolate sundae. I played with three friends using four controllers on PS4, but if you're light on controllers you can have two players share and use one joystick and set of triggers each. That just makes it more complicated... and that's a good thing.

So what is Overcooked in a nutshell? I'd say it is one of the best modern couch co-op games to be released this decade. It has everything going for it; a charming art style, great sound, awesome gameplay and it makes emergent stories that you'll talk about for days.

Hosting a dinner party at my place sure just got a lot more interesting.