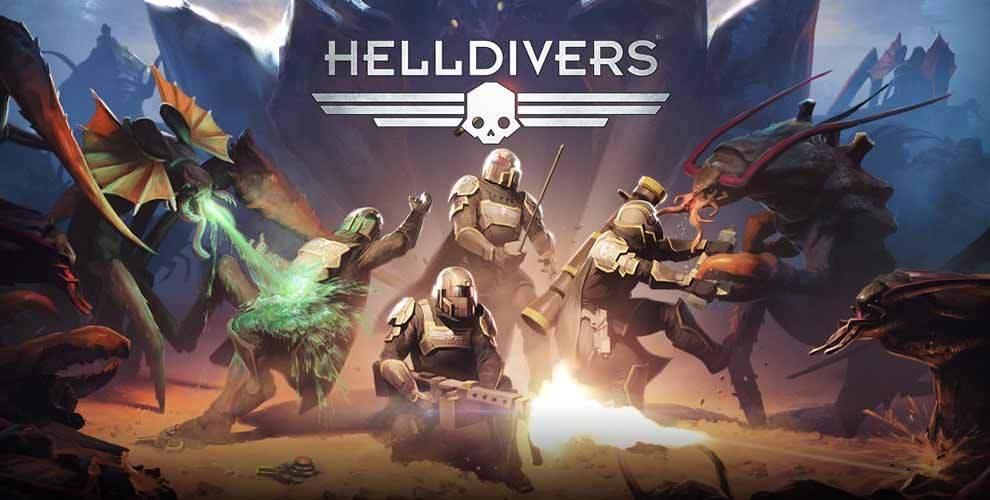 The war is fought on three fronts; against the hideous bugs, the lumbering cyborgs and the mysterious and powerful illuminate. How you equip your Helldiver is the first tactical decision, as different enemies need different approaches. Cyborgs for instance need armour piercing guns, and forgetting a close-quarters weapon against the bugs is a sure fire way to get chomped.

Helldivers pays homage to classic twin-stick and bullet hell shooters, with some spectacular modern sensibilities thrown in. You control your helldiver with the left stick on a controller, or WASD on the keyboard, and right stick or mouse to aim. You have buttons to reload, sprint and hit the dirt if the bullets start flying. Finally, you have codes to call in stratagems to turn the tide in your favours, but more on that later. The visuals are on par with Arrowhead’s previous (and excellent) Magicka games, but the sound design is gorgeous, at times thunderous and booming as bombs drop and machine guns rattle.

We Who Are About To Die

You will die, you will die a lot. But Helldivers doesn’t penalise you at all for accepting that you will be dismembered, gutted, shot, blown up and burnt to a crisp. So long as another battle brother survives to call in another drop pod for you, you can be back into the thick of the action in seconds.

Helldivers is a game to be enjoyed with friends - the type where you grab a beer, order some pizza and dive into it. You won’t be carefully picking off enemies or plotting a tactical ambush, you’ll be fighting for your life and flying by the seat of your pants. You must quickly respond to what the game throws at you, and you’ll spend much more time on the back foot than the front.

Levels play out across randomly generated maps with random objectives across different planets. You could be fighting bugs on a lava planet around molten rivers, or mechs in the jungle avoiding sprays of acid. The maps are varied, but as with a lot of games that use random generation, I would have loved a bit more variety in the design or some more spectacular set pieces. 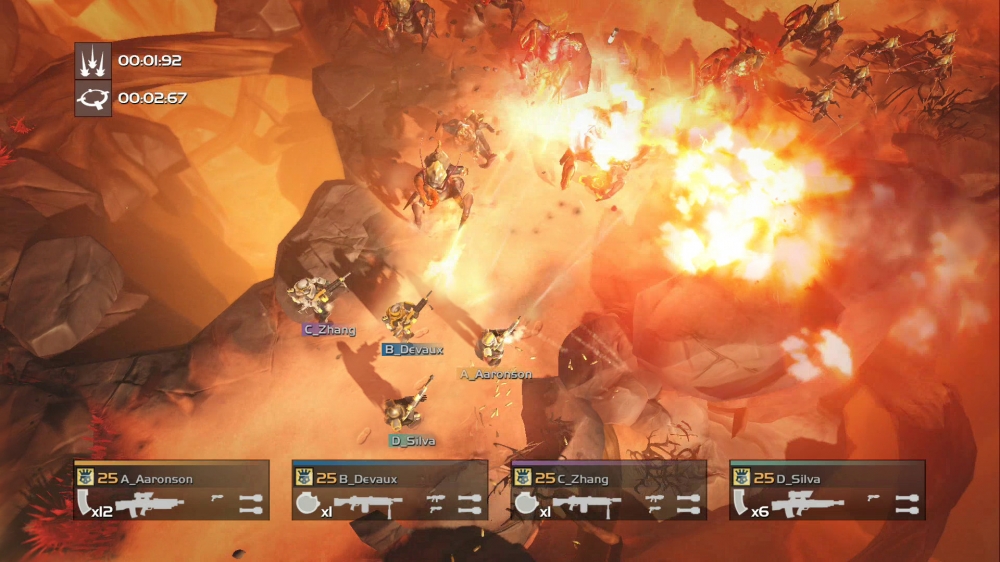 Buttons Are Your Friends

Everything in Helldivers is hectic and stratagems keep you alive. Stratagems are the abilities and weapons that add an element of tactics and decision making to the game. These stretch from an LMG with rapid fire and a trunk of ammo, all the way to airstrikes and tactical mech-armour.

Calling down a stratagem is one of the biggest decisions you can make mid battle as selecting the right one means stopping everything else to follow a string of on screen prompts - like entering a code - so you can toss out the beacon like it's a grenade. These code be simple - such as down, down, up, right on the arrow keys for a resupply beacon - but can stretch up to seven inputs. These need to be pressed in sequence correctly, a daunting task to complete accurately with bugs nipping at your body armour.

These codes also carry over to every one of Helldivers objectives, whether it is raising a beacon, calling in the drop ship or planting a bomb on a bugs nest. Finding the balance between speed and accuracy makes these tense moments as inputting combinations can take you out of the fight for valuable seconds.

Many of these stratagems are designed to utilise your whole squad, such as the M5 APC, a four person small tank with individual mounted weapons. Or the recoilless rifle, which comes with a box of ammo and a massive reload time, unless you have a teammate carry the ammo for you, then they can reload for you almost instantly. 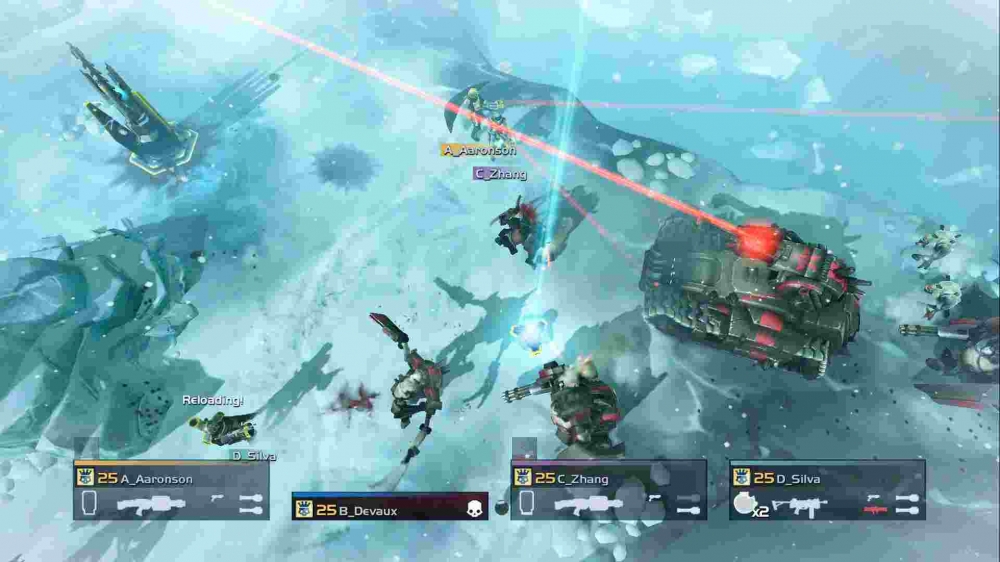 It is great to see a game throw off the usual shackles around multiplayer. Helldivers throws open the floodgates to any combination of players you can think of and it is very refreshing. I had some friends over to test with me - two of us on one computer, and two on another. The game played just as smoothly when we tried four of us on one machine, and every one of those friends bought copies and jumped straight back into my game from home that night.

Dropping in and out of a game is simple, whether you are in the lobby or mid match. Having a teammate hurtle out of orbit and crash land into your bug infested battlefield gives an awesome sense of camaraderie and scale of this ongoing war.

Friends can be just as deadly as the enemies though, and finding out how to best compliment your squad can take some time. Friendly fire is very, very real in Helldivers. Stray grenades, shotgun blasts, artillery strikes and landing vehicles can all kill you. I’ll never forget fighting my way through a hoard of screeching insects only to get crushed by the drop ship at the end of the level. It was a humiliating way to finish a valiant fight, but I was revived in time to hop aboard.

Buyers on Steam may worry seeing that the game launched with 14 pieces of DLC, thinking that this is some money grab. But rest assured this is a year's worth of DLC, which was produced for the PS4 version. I would have liked to see these all included in the PC release, even for a slightly increased price, but there are more than enough weapons to keep you splatting bugs without prying your wallet open again.

Helldivers is just the right mix of challenging and addictive. It is a true multiplayer arcade shooter and if it had been around when I was a kid I would have spent all my pocket money playing it.

I can’t recommend Helldivers enough for fans of couch co-op, but choose your friends wisely and prepare for hell.

Grab the game here on PS4.

Grab the game here on Steam.