Angry Birds meets Plants vs. Zombies in this feline frenzy. 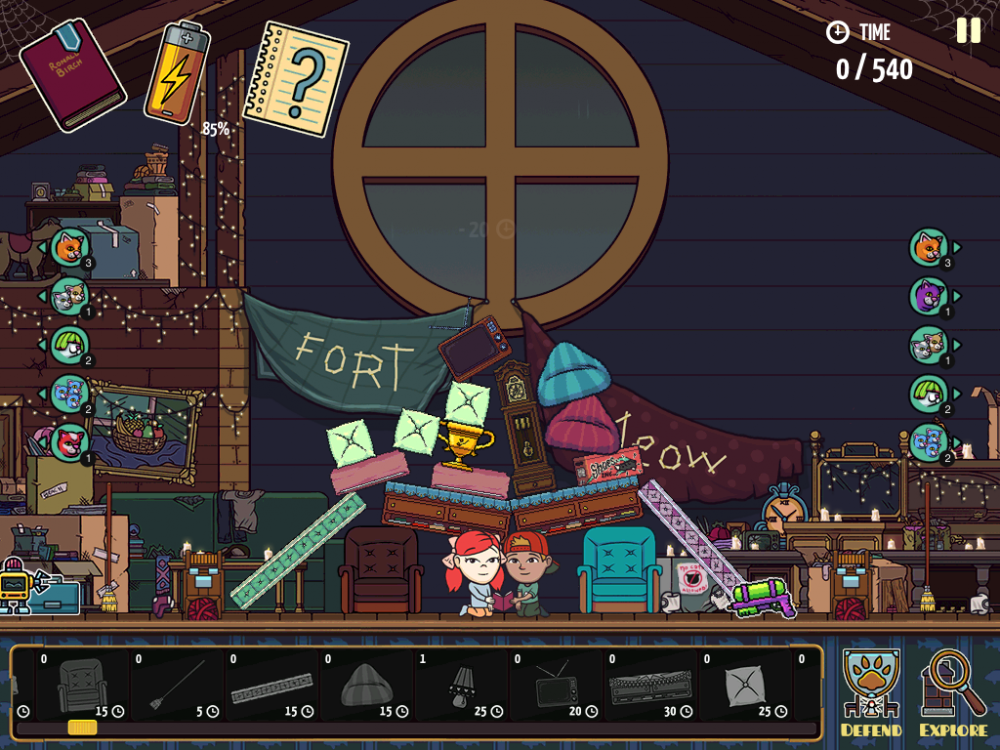 Throughout history, no war has been waged more ferociously than that between man and cat. Having owned a number of cats I can attest to their amazing ability to kick my blood pressure into overdrive in an instant, even while coming across as aloof and insipid creatures. But perhaps one of the most hotly contested battles is that for precious lap space. Even while trying to write this review, I shooed away a cat multiple times. No clear winner has ever emerged. This ongoing struggle lies at the heart of Fort Meow.

Our story begins with young Nia popping over to her grandparent’s house for a sleepover. But instead of being greeted with a smothering hug and freshly baked cookies, all Nia finds is a darkened house and her grandparents suspiciously absent. Trudging up to the dusty old attic, Nia happens across her grandfather’s journal.

Thinking that it might shine some light onto her grandparent’s whereabouts, Nia settles in to pore through the journal’s mysteries. But not all is as it seems. Flashing yellow eyes from the darkness and the skittering of paws on the floorboards alert Nia that she is not alone. Before she has a chance to gather her thoughts, like a Randy Orton RKO, outta nowhere cats come flying at Nia from every angle. You’d almost think that the cats don’t want Nia to read what’s in the journal... 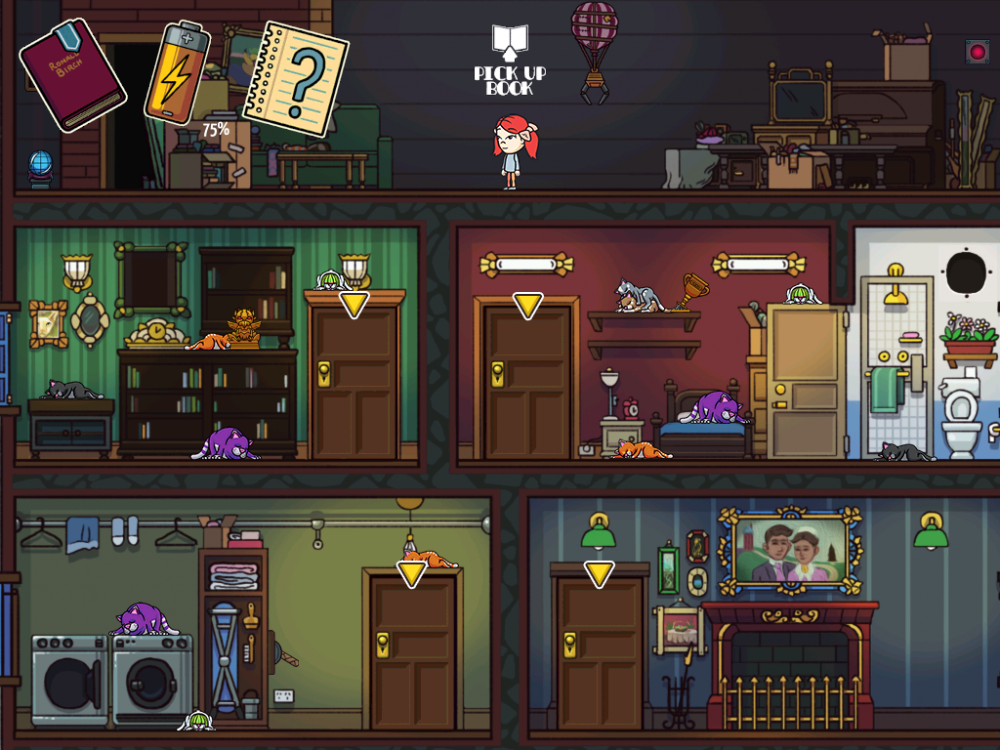 Fort Meow is an interesting take on the “defend your base” genre, combining the gameplay elements of Angry Birds (if you were playing as the pigs) and the strategic element of Plants vs Zombies. Each round an assortment of mischievous cats fling themselves at Nia to stake their claim on her lap and prevent her from reading the mysterious journal. The only means Nia has to defend herself is to build a little fort out of common household items.

Nia starts off with access to basic items like mattresses, brooms and chairs. The number of items Nia can place each round is dictated by “time," which is basically the currency of the game. Playing around with the item placement is quite fun, as they adhere to real-world physics. Getting a mattress to rest at an angle requires some deft finesse and thoughtfulness.

Once you’re happy with your makeshift fort, the cats will start hurling themselves your way with reckless abandon in an attempt to knock it down. Each round of successfully defending her precious lap space from the throngs of felines brings Nia closer to solving the mystery of where her grandparents have gone. But this also means the difficulty slowly ramps up, though never to the point where it is frustrating. New cat types enter the fray, like the appropriately named “fat cat,” which can instantly demolish any poorly constructed forts. Each cat type brings its own challenges, meaning that being thoughtful about item placement - particularly in the later stages - is much more important. 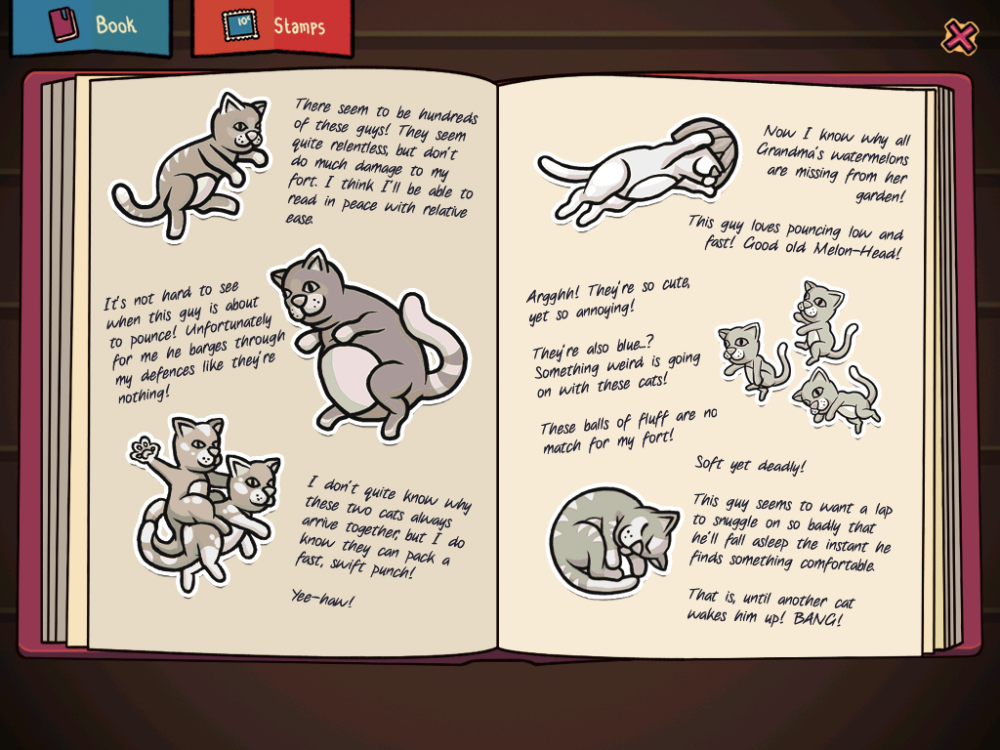 To counter the increasingly ferocious cat invasion, Nia gradually has access to a greater variety of household items to add to her fort. Grandfather clocks, toasters, foam dart guns and bean bags all have their own special properties to counter specific types of cats. It’s fun to play around with these items because seeing cats get squished, drenched and shot is perversely fun. Don’t worry, I’m not a monster though. It will all make perfect sense as the story unfolds...

As fun as Fort Meow was, I wouldn’t have minded if Upper Class Walrus had upped the difficult somewhat more. I failed an individual level no more than once and that was usually because I was being fairly indifferent to my item placement. Also, in total, it took me around an hour and a half to finish the game. I was disappointed that there wasn’t really anything more to do at its conclusion. Even a new game plus with a higher difficulty level (and more cat types) would have been a solid inclusion.

Despite the rather generic sounding name, Fort Meow is not just yet another cat game on the App Store. Fort Meow is a cute, clever and light-hearted take on the fort defending/strategy genre. For those who hate cats with a passion, you can also take solace in being able to get revenge on them. Just don't translate any of those ideas into real life.

You can grab Fort Meow on Steam and iPad.