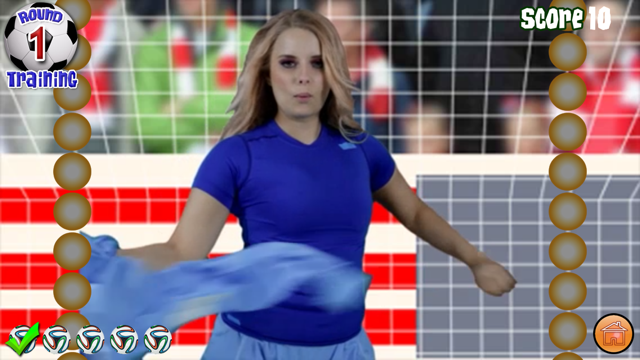 So I just got this email about a “game” called Penalty Shoot ‘Em Off where you flick soccer balls at women to strip them of their goalie get-up. In fact, it came in last week but I wasn’t sure what to do with it. On the one hand, it’s so horrendously bad it’s actually hilarious – like those YouTube videos where idiots hurt themselves – and you kind of want to point at it and laugh with your friends. But I am adding to the problem by talking about it.

Ultimately laughs have won out, and if nothing else this game sets the low bar all of the other awesome indie games we showcase on this site have kept themselves above by actually putting in the effort to create something of artistic merit and driving community growth. Many of which, sadly, will not sell as much as this filth.

I’ve played the game. Basically, a female goalie stands in front of the net. She doesn’t dive or try and stop the ball at all, meaning that if she actually blocks one of your shots then you’ve got problems beyond just downloading this game. Flicking the ball even remotely to either corner gets you the goal you need to see said player begin to strip. This sequence begins with the tackiest stripping music you could possibly imagine, a little dance, and then a layer is peeled off. Score all five goals and you get her down to her underwear…

It’s free to get the first goalie to strip off, so you can try it for yourself if you don’t believe us. If you want to get all five girls to drop their gear it’ll set you back $1.99. There’s no way I’d do that, but I can’t deny that the sheer hilarity of the five minutes I did play will stick with me long after I’ve recorrected my soul with any of the great indie games that just made our Top 10 Best Free iOS Games of April article.