Part II of Tim Schafer’s ode to the genre he helped established has arrived, and it should have come with a pair of rose-tinted glasses. 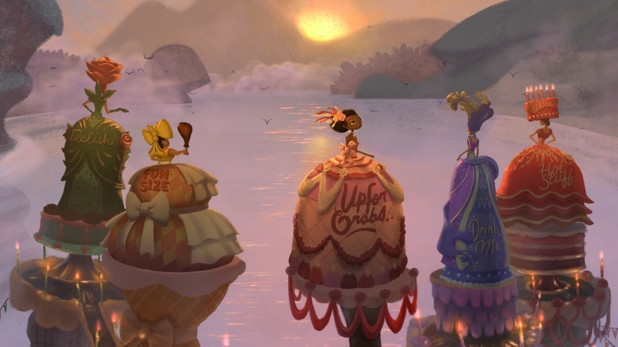 The Golden Years. For many people, this period encompasses their transition from childhood to early adult life - that blissful interlude where opportunity outpaces responsibility. The joys and pains we experience during this formative time become the memories that stick with us to the very end. But memory doesn't work like recorded video; it changes over time, and the things we think we remember may be nothing more than figments of our imagination. While this has always been an inescapable limitation of the human mind, nostalgia remains an effective marketing tool.

It’s unfortunate then that the lustre of our treasured memories doesn't always hold up under the harsh light of reality.

I recently became keenly aware of the flaws of my own memory while playing through Broken Age, the Kickstarted point-and-click adventure game from Double Fine Productions. Makers of the critically-lauded Psychonauts, Double Fine is headed up by Tim Schafer, the man behind a number of the genre’s true classics, including Maniac Mansion, The Secret of Monkey Island, Grim Fandango and Day of the Tentacle.

For those who did not follow the runaway Kickstarter success of Double Fine Adventure (as it was initially known), the project began with a relatively modest goal of raising US$400,000 to develop a game that harkened back to the adventure games of yore, focusing on witty writing, fiendish puzzles and bucketloads of charm. By his own admission, CEO Tim Schafer had hoped for, but not expected, at best a warm reception. What he received was an inferno. Fans clamouring for a return to the neglected genre threw their money at the project, signalling their support to the record-breaking tune of US$3.5 million. What had been pitched as a small labour of love exploded into a media sensation, paving the way for countless publisher-unfriendly projects to follow on in its crowd-funded footsteps.

It's just too bad it had to be an adventure game.

My memory tells me that I loved the classic adventure games back when they were the cornerstone of PC gaming. Sam and Max: Hit the Road remains indelibly woven into the tapestry of my childhood with its sheer off-the-walls craziness. But that was many years ago. The style of adventure games I play now - namely the Telltale brand of story-focused, puzzle-lite experiences - bear little resemblance to those aforementioned titans of the genre. But I, like many others I know, believed that it was simply a lack of games in the older adventure style vein that was to blame for my focus shift. If a new old-style game were to come out, I thought, I'd be all for it! Now, having finished Broken Age, I know I, at least, was wrong.

Broken Age isn't a bad game. The charm is there. The witty writing is there. The fiendish puzzles are there... and that's where the problems start. In their attempt to recapture the glories of adventure gaming's past, Double Fine might have gone a little too far. There is a reason that few games nowadays include the ability to use every single item on every single object in the environment, let alone require it. It's simply not enjoyable, and plenty of games – L.A. Noire, Life is Strange and most of Telltale's titles, for example - have come up with ways of crafting satisfying puzzles without demanding the player bash their head against the game for hours on end. Heck, 'adventure game logic' is a concept in its own right, and it’s not one that is often used as a compliment.

But Broken Age wears its inspiration as a badge of honour. It revels in asking the player to traipse from one side of its world to the other, through screen after beautiful screen - the art is unquestionably gorgeous - in order to obtain a sliver of information that might come in handy all the way back at the other end of the world. Or it might not, and the whole effort was a red herring. Or the player will find themselves at a narrative roadblock - only, they won't know it's definitely a roadblock, because the game never makes that clear. What they might not realise is that they have to switch to the other playable character and progress in their simultaneous story in order to uncover a crucial piece of information necessary to advance.

One particularly infuriating sequence epitomises the problems with Broken Age's puzzle design. The player has to translate one of a series of confusing images into a playfully obtuse description in order to obtain a series of instructions with another collection of similarly ambiguous images that then also have to be converted into the dubious descriptions.

The whole process needs to be completed without a single flaw, or else it will reset and the player will have to repeat the baffling rigmarole with a different set of images and descriptions. The annoyance factor is compounded by hearing the same lines of dialogue you have to skip through again and again. Double Fine apparently realised this puzzle would be cause for considerable consternation, as one of the dialogue options presented allows for fast travel between the two scenes pertinent to the solution. Unfortunately, that option is not made particularly clear, and it would be easy for the player to miss it and suffer even more every time they fail.

It's a real shame that the puzzles are so frustrating, because the story of Broken Age, along with its quirky characters and its colourful world, are so fantastically compelling. From a tree-fearing lumberjack turned Metal fan, to a man in a wolf suit living in the dark recesses of a space ship, to a couple of young girls obsessed with worshipping higher beings - until they discover an intimate purpose far more sacred - they are all hilariously written and impeccably voiced. More than a few of the jokes prompting me to laugh out loud, something that does not occur frequently in my gaming experiences - outside of unintended glitches, at any rate.

The art style contributes significantly to the game's charm. Lovingly drawn 2D environments make each scene a visual showcase, with varied and vibrant imagery lending the game an attractively unique identity that never ceases to delight. This proves invaluable in lessening the frustration of having to trek through those same scenes again and again. Unfortunately, the game's second half recycles the exact same environments from its first half, simply switching the perspectives of the two main characters in order to keep things fresh. It doesn't entirely succeed, meaning that just as the story is starting to pick up, the actual gameplay begins to get a little stale.

Ultimately, the endearing characters and picturesque art style of Broken Age did keep me engaged right through to the conclusion. And many of the jokes will remain with me, but so too will the infuriating puzzles and the archaic game design. If my time with the game has taught me anything, it is that the classic point-and-click adventure genre is no longer for me. Perhaps my attention span is simply too short nowadays for the trial-and-error approach necessary to conquer these titles, or perhaps my youthful interest was more a factor of game availability than actual enjoyment. Either way, I guess I'm going to have to throw my rose-tinted glasses in the trash.