Update: With the success of its "Westernvania" 2-bit Cowboy (Grab It here), Cascadia Games has today announced it's going full steam ahead on its next title, Wacky Wheels. We posted the story below back in January, and there still hasn't been any concrete details regarding release platforms or anything else other than the details in the original story, but we now have a window of release - Q3 2014. We'll follow it closely and let you know when we have more info to share. One thing is for sure, Cascadia will have a tough job matching the crazy new trailer for kart rival Angry Birds Go!

Original Story: Indie developer Cascadia Games has snapped up the license to the classic 1994 MS-DOS game Wacky Wheels, one of the first genuinely fun post Super Mario Kart entries into the then new pint-sized racer subgenre. We’ve yet to hear any real info, including formats, so here is hoping the iPad is included when the title releases later this year. Considering it is GameDock compatible, an App Store showing looks likely.

In the interim, all we can pass on is that it will feature six worlds inspired by the original game, high res cartoon artwork, a remastered soundtrack and a splitscreen mode (which we guess will be limited to GameDock users). If you need a kart racer to play while you wait, we recommend the very solid port of Sonic & All-Stars Racing Transformed, which has recently gone free-to-play.

Cascadia Games has form on the iPad and iPhone, compliments of its retro puzzle-platformer series Cavorite, that you can grab below: 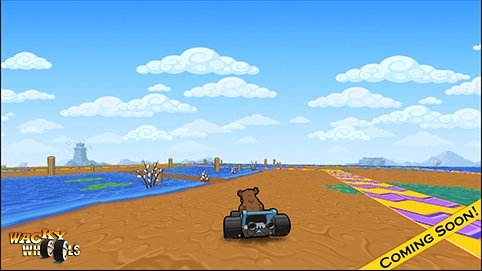