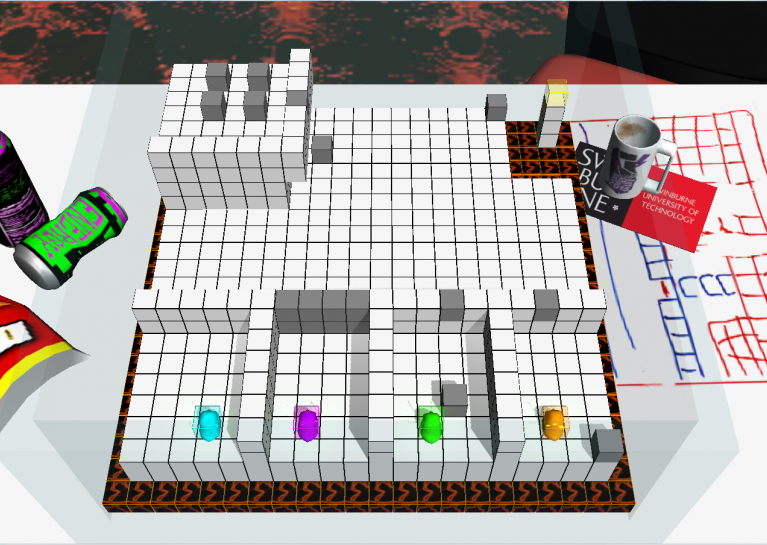 This is the second part of this story - be sure to start at Part 1 if you haven't already. Part 3 is also out.

We be jammin'
Day two of Global Game Jam unfolds like a spot the difference puzzle. Admittedly, as a humble press attendee, I've been home, slept, showered and generally made myself presentable. That is the first difference. At a game jam all of the usual niceties like brushing teeth, combing hair and putting on pants tend to take a back seat to the task at hand. So there are a few out of place tufts of hair, the 5 o'clock shadow has become the 29 o'clock shadow, and pizza boxes are strewn in the most unusual of places - most likely thrown there as a makeshift frisby. One team made a miniature fort out of their used cans of Pepsi and Red Bull, just to prank their artist when he woke up. I should say that they built it around his slumbering head.

But day two is also when the games that rose out of the communal ooze of ideas are suddenly starting to take shape. The lighting has struck the generator and Frankenstein's monster is starting to come to life.

The first team that I checked in on was one that I mentioned in part 1's commentary; the crossbred teams of PageBreak and Terran Studios. The Experiment was one of the games starting to take shape.

The first thing that struck me was the texturing on the environment in The Experiment. They had obviously put in a lot of time to make sure that the game's stage was a perfect replica of the table that they planned the game on. Complete with post-it notes, scraps of paper and a Global Game Jam coffee mug. The whole game is set right there in the room that I was playing in, down to the garish red, yellow and black carpet.

Set on this table in a small office, players take control of four coloured blob creatures, each with wildly differing abilities. These are the godlike powers of creating, destroying, pushing and levitating, and they need to work together to escape a simple blocky arena. These powers all affect the arena itself and the blocks that it is made from. I played as the creature who could "create," so I could spawn a new block - I quickly used this skill to create a set of stairs to try and escape, leaving the developers stranded. This freedom of choice given to each player drives the gameplay: you can help or hinder each other, and in the right position each player can set out on their own and leave the others behind. Its a careful blend of cooperative and competitive gameplay that means you will spend as much time convincing others to help you as trying to help yourself.

A few more rounds found me in vastly different circumstances, from being able to break blocks that the creator had spawned, to being able to push these blocks around as I saw fit. The game felt entirely different from each perspective, and even though the end goal hadn't been implemented yet, I could see how these simple, one button mechanics could allow for ever more complex puzzles and situations. 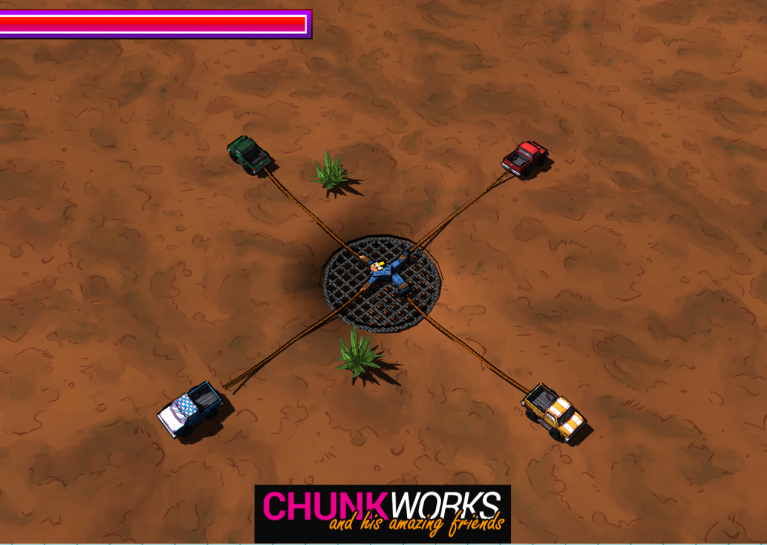 Next I checked in on another team on the level above, named ChunkWorks and His Amazing Friends. Their game Save President left me baffled, but wanting more. The concept is simple and flies in the face of logic. The President of the future is going to be executed, by tearing his limbs off with cars. Thankfully four of his loyal agents have infiltrated the scene and are now driving! So four players must work together to drag the president to the extraction point, while trying to keep as many of his limbs attached as possible. This nameless, faceless, easily dismembered politician is both your prize and your challenge as one driver pulling too hard in the wrong direction can have messy results. It begs the question, when handed the controller to a virtual car, doesn't everyone slam down the accelerator? I sure did. It ended much as you might expect. With screams and a forearm being dragged lifelessly behind my red truck. ChunkWorks and His Amazing Friends took a slightly different route to the other teams on day one - after the keynote speeches, the hours of setup and the theme reveal - they headed off down to the pub to discuss ideas over a few beers. I'm glad that they did, as the carefree, excitable, boyish design that came out the other end is all the better for it.

This design takes suspension of disbelief to a whole new level, and suspension of common decency. The joy and horror that comes from the latest slasher flick, the morbid curiosity of sticking a pencil into a fan blade, the excitement of squeezing that one pimple that has been niggling your chin for weeks.

Just me? Oh well, we all know the feeling.

As the lead artist Liam put it “win or lose, everyone has fun.” I stayed for a few more rounds, each time struggling to communicate with the other players, trying to work out which way to drag our prize while not knowing which way the exit was. Other game modes include the more savage Wishbone Mode, where the goal is to hold onto as much of the President as possible, egging on the other players to pull too hard and leave you with the bigger piece. Finally Presidential Race is a more traditional straight line race, however each car has their own presidential candidate strapped to the roof of their vehicle and must keep him on until the end. More often he winds up as fashionably dressed roadkill.

Day two is winding down, and in part 3 the games will be played, tested and compared. So come back and I will let you all know how this wonderful couple of days came to an end. Whether with a bang or a fizzle, it will be worth it for the adventure.