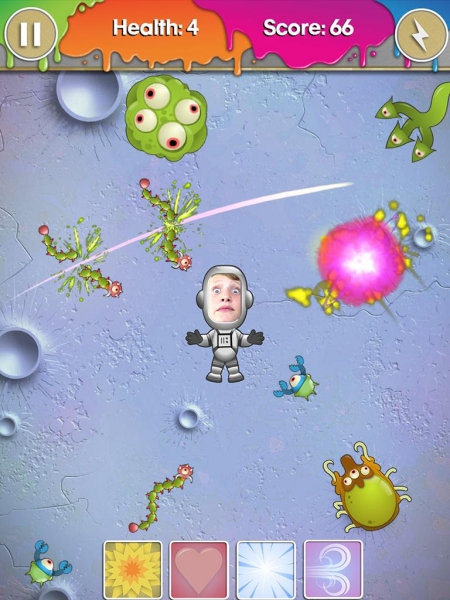 Update: Prepare your selfie - Face Invaders just released. You can grab it here.

Original Story: Australian developer Electric Mammoth is bringing an intriguing title to the App Store tomorrow, called Face Invaders. It’s an apt title, since your avatar is a selfie you take prior to starting the game, after which aliens swarm towards the centre of the screen and you need to tap and swipe them Fruit Ninja-style to win the day. Here is the quite funny developer spiel:

“Face Invaders is a fast-paced arcade game that allows you to put your face on your in-game avatar. You are then attacked by endless waves of nasty alien jerks and hideous bosses who must be tapped, slashed, squished and generally decimated in a glorious ballet of agile fingers and exploding alien goop. It's kind of like Fruit Ninja, but without the fruit... or the ninja.”

We caught up with designer Tim Cover and programmer Chris Lewis to find out a little more:

Face Invaders is aptly named, what led you to the idea of putting the player’s mug on the avatar?
TC: The design process for Face Invaders began with a stack of blank iPhone screens on paper and a whole lot of sketching. Right from the start, almost all the sketches began featuring variations of people on a screen being attacked by things. We were also thinking a lot about how to best use the features and attributes of smartphones and tablets, and just thought it would be cool to use the in-built camera to get players into the game. We thought it might be something that would provide a lot of laughs for players and it felt sort of new and unique.

I'm actually a bit scared by selfies, there are far too many duck-faces being pulled around the world right now, but Face Invaders allows players to put themselves in the game in order to save the planet from an alien invasion, so maybe this is an opportunity for selfies to be taken for good, rather than evil.

It seems like a simple idea, but from a coding perspective, what challenges did implementing this feature present and how did you overcome them?
CL: Thanks to developing our game in Unity, the process of accessing the phone's camera, taking a photo of the player and fitting it within the avatar was not too complex, however, what gave us grief was that the orientation of the photo was device-dependent, meaning what looked right on iPhone might turn upside-down on Android, or vice versa. We fixed this by adding platform-specific configuration for the photo-taking process, which required a little head-scratching and tweaking to ensure it would look right on every platform.

Is it fair to say you were influenced by Fruit Ninja’s swipe gameplay and is there any other titles that were on your mind during development?
TC: If forced at lightsaber point to compare our game with another, it would make sense to compare it with Fruit Ninja simply because players do need to slash at the screen to destroy things in both games. The truth is though that we simply looked at what players can do on smartphones and tablets, and what kind of inputs do these devices allow, then went from there. So yes, there is slashing in Face Invaders, but there is also tapping, holding, combinations of inputs and aliens that shoot other aliens at you out of their mouths. No offence to Fruit Ninja or Halfbrick, because they are awesome, but the real inspiration for our game design came from the devices on which the game would be played.

The game has a distinct visual style and a light, humorous tone; what vibe did you set out to capture and why?
TC: I'm glad you found it light and humorous because that is the exact vibe we were going for. I guess it was important for us to identify exactly what we were aiming to make and then be true to that. Face Invaders is not a deep and emotional journey, it is not an endlessly deep strategic masterpiece. Face Invaders is simple, accessible and fun. It is a game designed to make you smile, and so everything was designed with that in-mind. It's colourful and cartoony with quirky sound effects and a very tongue-in-cheek narrative. Watching people at games festivals laughing and squealing loudly as they play the game has been extremely satisfying.

Can you/will you add to this game post release, perhaps with some new power moves?
TC: We will definitely be adding to the game. There are already heaps of exciting ideas for new features, creatures and powers floating around the studio. I think for a small team though, there comes a point in development when you have to say, “enough,” and just release the most polished, feature-complete game you can. I recently turned to Chris and said, "hey wouldn't it be cool if we had this alien that zoomed across the screen really quickly screaming it's head off and if you can kill it as it flies through you get loads of points and money?" He gave me the stern look of a tired programmer and said, "maybe in a future update Tim; maybe in a future update."

The thing is also that Face Invaders is a premium title (costing one dollar makes it a premium title these days) and I'm really keen to repay the faith players put in us by spending that dollar on our game. Face Invaders will never have in-app purchases or pay walls for additional content. We will aim to provide regular updates for our players to make sure they really get their money's worth!

Look out for our review tomorrow; in the interim, the trailer is below.